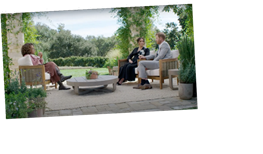 Billed as Oprah with Meghan and Harry: A CBS Primetime Special, the clips bowed during the eye network’s 60 Minutes newsmagazine.

Harry is seen referencing the fate of his late mother, Princess Diana.

“My biggest concern was history repeating itself,” he says. “I’m really relieved and happy to be sitting here, talking to you with my wife by my side because I can’t begin to imagine what it must have been for her going through this process by herself all these years ago. (Watch one promo above and one below.)

The network will air the primetime interview with Meghan Markle and Prince Harry on Sunday March 7 at 8 pm ET/PT.

Per CBS, the interview will see Winfrey speak with Markle about everything from stepping into life as a Royal, marriage, motherhood, her philanthropic work, and how she is handling life under intense public pressure.

Later, the two will be joined by Prince Harry, as they speak about their move to the United States and their future hopes and dreams for their expanding family. The interview comes a year after the couple moved to the US and became independent from the Royal family.

Since they have relocated to California, the pair have signed lucrative deals with Netflix and Spotify. The Queen recently stripped them of royal patronages after a one-year review of the so-called “Megxit” deal, in which the couple wanted to step back from public life, but still serve and retain some privileges. Reports indicate Queen Elizabeth declared that the “half-in, half-out” approach would not compatible with the established protocols for the monarchy.