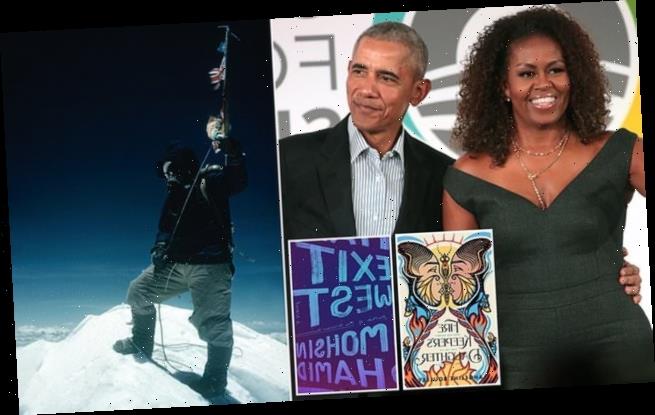 Barack and Michelle Obama announce SIX new Netflix projects as part of lucrative multi-year production deal, including a science fiction movie, a YA book adaptation, and a film about the first man to summit Mt. Everest

Barack and Michelle Obama have announced a slate of six new projects as part of their lucrative multi-year deal with Netflix, revealing that they will lead production on a variety of new TV shows and movies, including a film about the first man to summit Mt. Everest.

Higher Ground Productions, which the former first couple founded in 2018 partnership with Netflix, revealed that it is currently working on varied line-up of four new films and two more TV series.

Among them are a docuseries about national parks, a science-fiction movie, and a TV show based on a young adult thriller about a Native American teen who goes undercover. 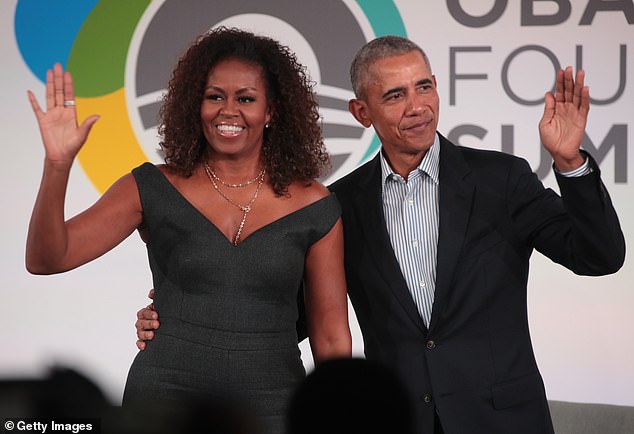 ‘We created Higher Ground to tell great stories,’ the Obamas said in a press release. ‘This group of projects builds upon that goal and the incredible path forged by films like “Crip Camp,” “Becoming,” and the Oscar-winning “American Factory.”‘

‘From science fiction to the beauty of our natural world to the relationships that define us, Higher Ground continues to strive for fresh perspectives, compelling characters, and a healthy dose of inspiration,’ the couple continued.

‘We couldn’t be more proud to team up with the brilliant artists behind each of these stories. Each of them has something important to say.’

The Obamas did not have a wealth of production experience before inking a deal with Netflix in May 2018, howeverm they enlisted several industry professionals to bring that insight to Higher Ground.

Producer Priya Swaminathan and director and producer Tonia Davis were named as co-heads of the production company in February 2019.

Ted Sarandos, Co-CEO and Chief Content Officer, of Netflix, added of the Obamas’ upcoming projects: ‘”American Factory,” “Crip Camp,” and “Becoming” have captivated audiences all around the world, and their new slate highlights the variety and depth of programming on the horizon as well as new and exciting storytellers.’

It has never been disclosed how much the Obamas were paid as part of the Netflix deal, however, major producers like Shonda Rhimes and Ryan Murphy have received upwards of $100 million in their own respective partnerships with the streaming site.

The Obamas signed a joint $65million book deal with Penguin Random House in March 2018 for their respective memoirs, with Michelle releasing hers — Becoming — in November of that year, while Barack’s — A Promised Land — was published in November 2020.

Below, see the new movies and TV shows the Obamas are bringing to Netflix in the next few years.

‘Tenzing’ is a movie inspired by the true story of Tenzing Norgay, Tibetan mountaineer who reached the top of Mount Everest in 1953.

Along with Sir Edmund Hillary, who he climbed with, Tenzing was the first person to summit the mountain, which is the world’s highest peak at 29,035 feet.

Tenzing lived in the Khumbu region of Nepal, near Everest and became a sherpa, embarking on his first expedition as a porter in 1935.

He went on several more expeditions before ascending with Hillary, and is considered a hero to  many Nepalese and Indians.

He was awarded Britain’s George Medal and the Star of Nepal. In addition to collaborating on his own autobiography, he is also the subject of the book ‘Everest’ (1978) and ‘Tenzing: Hero of Everest’ (2003).

It is that latter book, by Ed Douglas, that Netflix’s new movie is based on.

The script was written by Oscar nominee and BAFTA winner Luke Davies, and it will be directed by BAFTA nominee Jennifer Peedom — who has climbed Everest herself.

This is a big project for Ola Shokunbi, who previously wrote Sadé, a live-action fairytale about an African Princess.

This movie will be written and directed by Tayarisha Poe.

It ‘follows Celestina, 29, on the day of her first wedding. Or not a wedding, exactly, but a party. A party where there’s movement, and Celestina is out of sync. The guests flood in; a storm approaches.’

Tayarisha’s debut film, ‘Selah and The Spades,’ premiered at the Sundance Film Festival in 2019 and was released in April 2020 by Amazon Studios.

A rising star in the film industry, she was one of Filmmaker Magazine’s 25 New Faces in 2015, winner of the Sundance Institute’s Knight Foundation Fellowship in 2016, a 2017 Pew Fellow, and one of Variety’s 10 Directors to Watch in 2019. 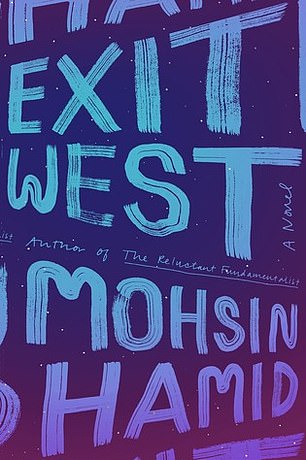 Read up! The upcoming film ‘Exit West’ is  based on a novel of the same name by Mohsin Hamid (left), while a series called ‘Firekeeper’s Daughter’ is based on a YA novel by Angeline Boulley

A rather timely film on the docket is ‘Exit West,’ based on a novel of the same name by Mohsin Hamid — which President Obama named as one of the best books he read in 2017.

It was also selected for the Booker Prize longlist and named one of the New York Times’ 10 Best Books of 2017 .

‘A love story set against an epic global migration enabled by a supernatural phenomenon, “Exit West” is the story of two people as they seek a better life together, all the while yearning for a home to which they may never return,’ reads the description.

The novel is about Nadia and Saeed, who fall in love while chaos and violence spread in their country. Together, they flee west as refugees.

Primetime Emmy Award winner Riz Ahmed, who appeared in the 2014 film ‘Nightcrawler,’ is set to star and will also executive produce.

It will be directed by Yann Demange (who previously directed White Boy Rick) and co-produced with Joe Russo, Anthony Russo, and Mike Larocca for the Russos’ AGBO. 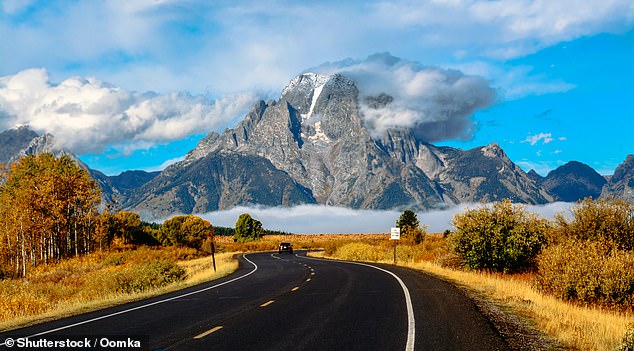 As for TV series, viewers can expect a natural history show called ‘Great National Parks,’ which will ‘explore some of the most wondrous national parks and wild spaces on Earth.’

‘Highlighting extraordinary species and habitats, the series will illustrate the importance of protecting the world’s remaining wildernesses and making them accessible for all,’ reads the description.

The series is being produced in conjunction with Wild Space Productions and wildlife filmmaker James Honeyborne of the award-winning series BluePlanet II.

It’s no surprise that President Obama would be involved with a national parks project, as he made a mark on the national park system during his two terms in the White House.

According to the BBC, he protected more natural habitat than any president in American history.

He put 548 million acres of habitat under protection, compared to the 290 million acres by President Theodore Roosevelt, who founded the US National Parks.

His legacy includes the two largest marine reserves in the world and the world’s second largest desert reserve. 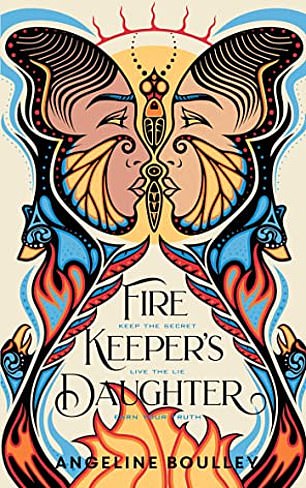 The Obamas really got ahead of the game ‘Firekeeper’s Daughter,’ which is based on a YA novel by Angeline Boulley that hasn’t even come out yet. (It’s expected to be published this spring).

‘Firekeeper’s Daughter’ is about an 18-year-old Native American teen named Daunis Fontaine, who lives on the Ojibwe reservation.

Afer Daunis witnesses a murder, she ends up being recruited to go undercover with the FBI to investigate a new drug.

Both author Boulley and series co-writer Wenonah Wilms are from the Ojibwe tribe.

Mickey Fisher, who created the shows Reverie and Extant, will serve as showrunner. 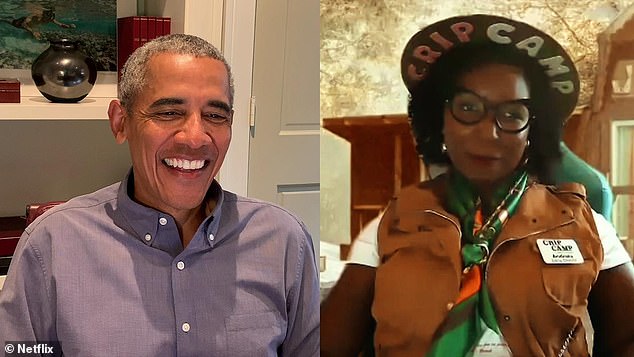 Past projects: President Obama is pictured with Andraéa LaVant, a disability advocate and consultant on the documentary Crip Camp

The announcement comes just two-and-a-half months after the production company revealed it was working on two other projects.

One is the comedy series ‘The G Word with Adam Conover,’ which is loosely inspired by Michael Lewis’ bestselling book ‘The Fifth Risk.’ 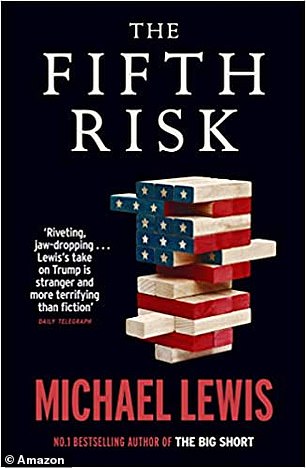 The Obamas acquired the rights to Lewis’ book in 2018. Lewis is also the best-selling author of The Big Short and Moneyball, which have both become revered movies.

‘The Fifth Risk’ explores the political appointments of the Trump presidency and the effects they had on various departments.

The series will also offer documentary elements as viewers learn more about the civil servants who work behind the scenes in government.

It was created by Fair Point and will be run by Conover, along with Jon Cohen and Jon Wolf.

They will both join the three projects that Higher Ground Productions have already produced, including the documentary capturing Michelle’s book tour for ‘Becoming’.

Another, ‘Crip Camp’ — a documentary about a summer camp for teens with disabilities — has already won the 2021 International Documentary Association award for Best Feature. 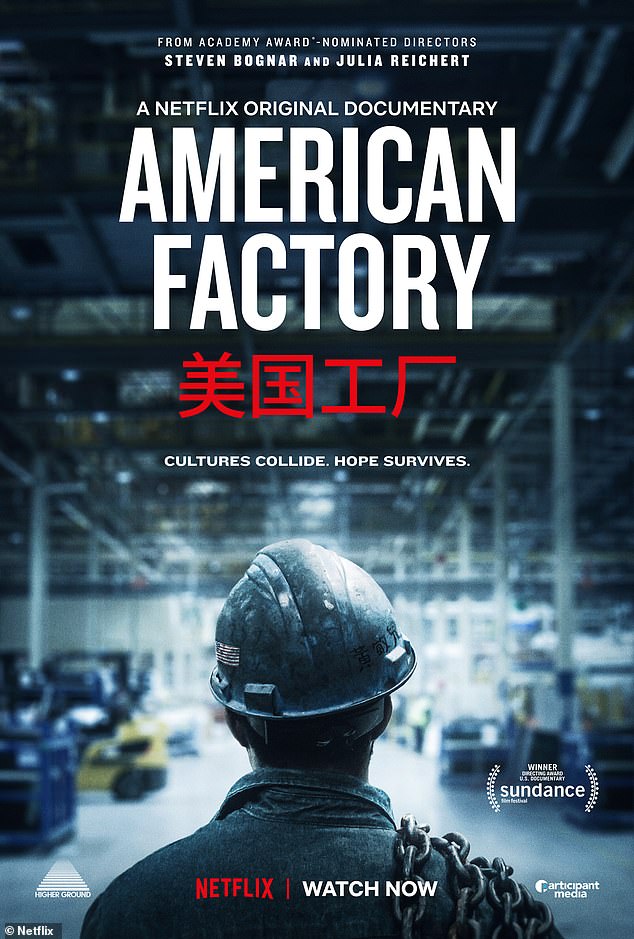 Previouly released: ‘American Factory’ tells the story of a Chinese billionaire who opened a new factory in an abandoned General Motors plant in Ohio 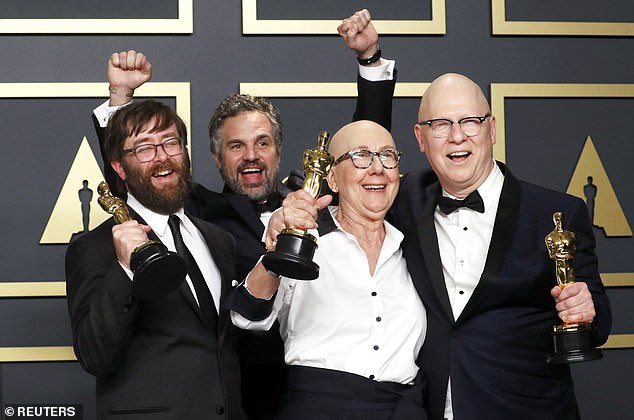 Finally, ‘American Factory’ documented how employees at a former General Motors plant in Moraine, just outside Dayton, Ohio, suffered the impact of globalization following the closure of the glass manufacturing site in 2008.

The documentary picked up after the plant after it was bought by a Chinese billionaire.

It won the Academy Award for best documentary in 2020, and former President Barack Obama congratulated filmmakers Julia Reichert and Steven Bognar on the film’s success.

He tweeted: ‘Congrats to Julia and Steven, the filmmakers behind American Factory, for telling such a complex, moving story about the very human consequences of wrenching economic change. Glad to see two talented and downright good people take home the Oscar for Higher Ground’s first release.’