Workplace Relations Minister Tony Burke has abandoned his hardline stance against changes to the better off overall test, saying he will not rule out a compromise after the union movement shifted its position on enterprise bargaining.

Burke has now left the door open to simplifying the legal test that must be applied to workplace negotiations, a sticking point in the lead-up to this week’s jobs summit, after the Australian Council of Trade Unions and peak body for small businesses reached agreement. 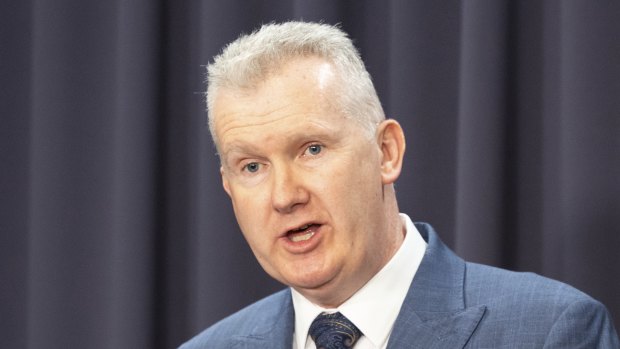 Workplace Relations Minister Tony Burke is willing to compromise on the better off overall test.Credit:Alex Ellinghausen

“Up until the summit I’ve been pretty hardline on the better off overall test, and I took the view that if I was expecting everybody else to come forward with compromises and to try to find a way together at the summit, that I should be willing to do the same,” Burke told ABC Radio National on Monday morning.

“So, while I’m very careful and wary of changes to the better off overall test, I’m not ruling out that we might be able to find compromises that make the whole system work more effectively.”

Burke was hesitant to outline what the changes could be but hinted he was agreeable to seeing the ratification of enterprise agreements that had majority support of the workforce, a key ask of business groups.

“There are tiny clauses, tiny specific rules, agreements that have had, you know, more than 90 per cent support from members, have sometimes been overturned on a technicality,” he said.

“Wherever we can make the system more practical than I’m interested.”

The better off overall test, or BOOT, is a legal threshold that ensures individual workers do not go backwards in enterprise bargaining. Employers want the test simplified by scrapping clauses to do with hypothetical scenarios and allowing the passage of agreements that have majority workforce backing.

ACTU secretary Sally McManus said on Sunday the BOOT should be simplified.

“I think we can achieve simplicity and then build in very easy safeguards to make sure that people don’t go backwards. You maintain the fact that it is better off overall, but you don’t hold up agreements for ages because there are complicated things that the commission has to consider,” she said.

The ACTU has reached an agreement with the Council of Small Business Organisations Australia to allow multi-employer bargaining, a significant milestone off the back of a fractious debate over industry-wide bargaining. The agreement also includes a simpler BOOT.

COSBOA chief executive Alexi Boyd said the agreement would benefit employers who didn’t have the resources of larger companies to be able to effectively strike agreements with their workers.

“The current bargaining system was not built for us, it is not efficient and is too complicated. We welcome the opportunity to explore new flexible single or multi-employer options that can be customised to our circumstances,” Boyd said.

Burke said the agreement represented “exactly the sort of cooperation we’ve been hoping to achieve with the summit.”

“If you’re in small business right now, you are cut out of any of the benefits of bargaining,” he said.

08/29/2022 lifestyle Comments Off on ‘Not ruling out’: Tony Burke softens ‘hardline’ stance on better off overall test
Recent Posts