Former Nationals leader Barnaby Joyce has played down the prospect of a spill against Deputy Prime Minister Michael McCormack but has not ruled out standing for the top job if a party room meeting on Monday forces a decision on the leadership.

“There is no prospect of a spill at this point in time,” Mr Joyce said on Monday morning, ahead of the 10.30 am meeting in Parliament House. 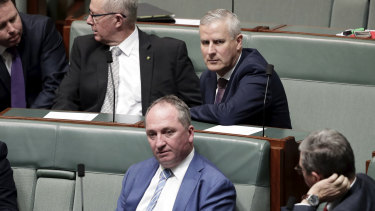 Mr McCormack is staring down talk of a challenge and his supporters dismiss claims that Mr Joyce has gained a slight majority in the party room of 21 federal Nationals MPs and senators, but others insist there is growing support for a spill.

Asked on the Seven Network on Monday morning if he would stand for the position if there was a spill, Mr Joyce said, “Ask me if that happens”.

His close friend and ally, former resources minister Matt Canavan, also played down the chances of a spill on Monday morning but confirmed he had spoken to Mr McCormack on the weekend to tell him the leader did not have his support.

“I’ve been up front about that view, it’s not something that’s changed. We’ve got to make sure we put our best foot forward in regional Australia and keep this government elected,” Senator Canavan said.

With speculation rife, the options for the Monday meeting include a direct challenge against Mr McCormack or a motion of no confidence in his leadership that, if carried, clears the way for deputy leader and Agriculture Minister David Littleproud and Resources Minister Keith Pitt to enter the contest.

Nationals Senate leader Bridget McKenzie, who stepped down as deputy leader and sports minister early last year over her role in the “sports rorts” saga, is also seen as a contender if the leadership positions are thrown open.

One of Mr McCormack’s strongest supporters, Veterans’ Affairs Minister Darren Chester, said voters were tired of the “bulldust” around the leadership when the country was battling the pandemic.

“They want us to be focused on them and the issues that matter to them,” he said of the voters. “So I think that Michael will continue in his role throughout the day and lead us to the next election.”

Assistant Minister for Families Michelle Landry said Mr McCormack was doing a good job and said she had had a “gutfull of it all” when voters did not want to hear the MPs talking about themselves.

Mr Joyce acknowledged he could not be sure where every MP stood because few could be trusted when indicating who they would support.

Asked if this meant politicians were not telling the truth even behind the scenes, Mr Joyce said, “That is precisely what I’m telling you”.

06/20/2021 lifestyle Comments Off on ‘No prospect of a spill’: Joyce downplays leadership tilt ahead of Nationals meeting
Recent Posts