What better way to celebrate the end to the “imprisonment and apartheid” imposed by “the supreme leader, his Excellency the Almighty Dominic Perrottet”, than with a ball?

On Wednesday evening, the day restrictions end in NSW for the unvaccinated, allowing them to mingle freely, former Liberal MP and United Australia Party leader Craig Kelly was slated to appear as a “special guest” at a $500-a-ticket freedom ball in Sydney’s inner-west. 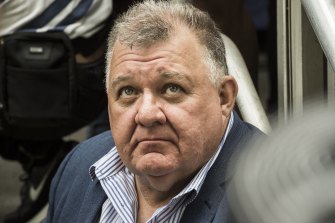 Former Liberal MP and United Australia Party leader Craig Kelly was due to appear as a “special guest” at a freedom ball in Sydney on Wednesday night but it’s been cancelled.Credit:Steven Siewert

But the ball, organised by Simeon Boikov, the self-styled leader of the “Australian Cossacks”, a pro-Vladimir Putin propaganda organisation, was cancelled at late notice, less than a day before it was scheduled, after the hosting venue pulled out.

In a YouTube video promoting the ball at Le Montage, in Lilyfield in Sydney’s inner-west, Boikov said: “Here we are, the last few hours of imprisonment and apartheid.

“Soon we will be able to enjoy a function … and no longer be second rate citizens.

“I am sick of having to eat kebabs on the sidewalk with Mrs Cossack … I am finally allowed, we all are, by the grace of the supreme leader, his Excellency the Almighty Dom Perrottet.”

The video was posted on Monday on Boikov’s popular YouTube channel, which has 141,000 subscribers.

On it, he also documents an apparent police raid on his house by Strike Force Raptor, in which he tells his neighbours to “call CrimeStoppers, you dogs”, when they ask him where his mask is.

In August Boikov appeared via video-link on the Alex Jones show on InfoWars, the notorious far-right conspiracy theory website closely associated with the extreme in the American political right.

Boikov and Kelly were set to be joined at the Freedom Ball by a contingent travelling from Melbourne, including far-right YouTuber Avi Yemini, who works for the right-wing website Rebel News, anti-lockdown activist Monica Smit, described by Boikov as the “Joan of Arc of the freedom movement”, and “The Real Rukshan”, Rukshan Fernando, a 36-year-old videographer who filmed Melbourne’s violent anti-lockdown protests in September.

Also supposed to be attending were anti-vax social media influencer Maria Zee, and “that comedian who predicted all the case numbers on TikTok, I think his name’s John”, Boikov said in his YouTube video.

He appears to be referring to Jon-Bernard Kariouz, the 24-year-old who shot to fame after correctly “predicting” the NSW daily case numbers on TikTok for five days straight.

According to news reports, Kariouz was later hospitalised with COVID-19.

In his video promoting the event, Boikov thanks “partners” including the Liberal Democratic Party and the UAP party, and a local diamond store.

When contacted on Tuesday, Mr Boikov said the ball would go ahead in some capacity to “fight tyranny”. He said it was not a political fundraiser, and “90 per cent” of the tickets had been given away. He later said the 10 $500 tickets sold had been refunded.

“Police have put pressure on the venue,” he said.

“They’re trying to shut it down … it’s disgusting that it’s Freedom Day and the police would go to these lengths.

“Some of these freedom fighters haven’t been out to a restaurant for 18 months. The police have made this into a real freedom ball, and they have put attention on the cause.”

NSW Police said they had been in contact with the venue as part of normal policing work, but said the venue itself decided to pull out of hosting. Calls to Le Montage went unanswered on Tuesday.

In February, Kelly resigned from the Liberal Party and moved to the crossbench after receiving criticism for spreading misinformation about vaccines on social media, just as the government was ramping up its COVID-19 vaccination campaign.

He has since become the leader of the United Australia Party, founded and financed by mining magnate Clive Palmer.

Mr Kelly did not respond to phone calls and messages before publication.

12/14/2021 lifestyle Comments Off on No ‘freedom ball’ for Kelly, pro-Putin activist and anti-lockdown right-wingers
Recent Posts