Nigel Farage spoke to MEPs in the European Parliament today. In his speech, the prominent Brexiteer, 54, addressed the topic of EU leaders pushing back the Article 50 process. Donald Tusk and Jean-Claude Juncker could both be seen looking on as Farage spoke – and despite attempts to appear unmoved, Tusk’s body language showed he was left “thunderous”. Body language expert Judi James analysed footage of Farage’s speech, looking at Tusk’s reaction.

Farage called on MEPs to vote against a further Brexit extension, insisting that a no-deal Brexit would “not cause huge disruption”.

He went on to claim that there would be “no need for a physical border in Ireland”.

Farage said: “I would say to all of you, our national leaders, reject the British extension beyond the 12th of April. Get Britain out, and we can all just get on with the rest of our lives.”

Following his speech, some onlookers applauded the former UKIP leader. Moments later, the footage changed to reveal a close-up shot of President of the European Council Donald Tusk, 61, giving viewers a glimpse at the Polish politician’s reaction.

Speaking exclusively to Express.co.uk, Judi shared her analysis and said: “It was obvious from Tusk’s body language that he was on a very short fuse before Farage rose to his feet to add a little public humiliation to his seemingly already bad day.

“Animated through the previous speech, Tusk began tapping, stabbing and then drumming his fingers on the desk in front of him in a series of metronomic gestures that signalled growing irritation and impatience. 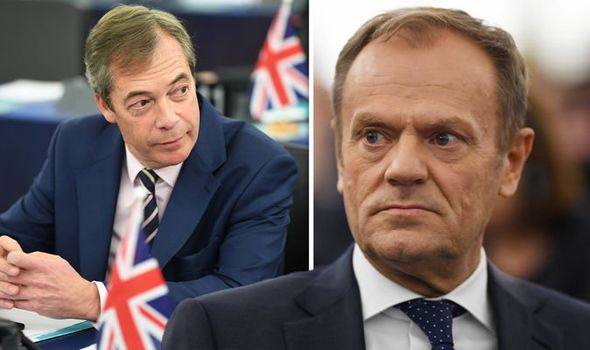 “His facial expression also looked thunderous but perhaps he’d had a warning of what was to come.”

Looking at Farage’s body language throughout his speech, Judi said: “Farage was in his usual bobbing, peacocking mode for his speech, throwing Ypres and the First World War into the mix as he combined emphatic gestures like his body-baton rituals with enough hand-massaging and clapping to suggest he was relishing every moment on his feet.

“He even made his own stab at negotiating a deal on Brexit by asking for an extension to be rejected under the threat ‘Do you really want me back in this place?’ followed by some panto villain stirring up of the boos and jeers from the other delegates.”

Farage then went on to speak to Tusk directly – causing an ‘icy’ reaction.

Judi continued: “Then he addressed Tusk directly with his left hand raised palm-out to suggest control and dominance. 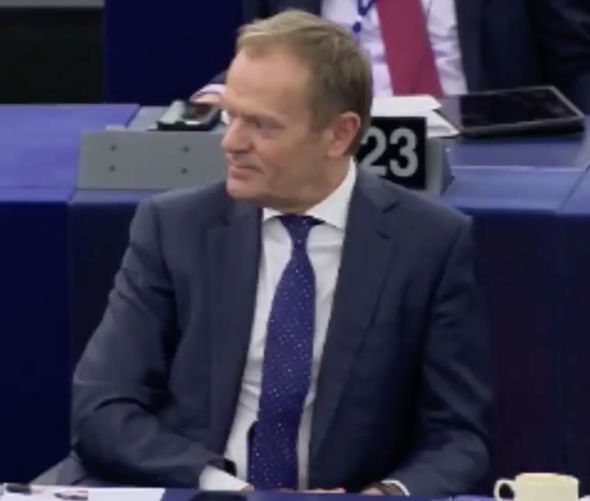 “He called Tusk ‘deluded’ and although the response might have appeared well-managed, with Tusk taking a stab at performing a poker face, his annoyance was obvious from his subtler cues.

“Sitting with a stare icy enough to chill the entire chamber, Tusk performed one slow blink as he sat with his mouth clamped shut and his brows pulled together with the outer end of the right brow raised to suggest anger and incredulity.

“The mouth clamp cracked first as he was called out by Farage and he did a micro-gesture akin to chewing.

“As Farage praised Juncker and Barnier the stare hardened, the lips twisted a little more and – perhaps in an attempt to mask his emotions via what actors call ‘A bit of business’ , he quickly pulled some paper and a pen across to busy himself with.

“If it was Farage’s aim to wind Tusk up it looked very much from the body language as though he’d scored a bit of a bullseye.”

03/27/2019 lifestyle Comments Off on Nigel Farage scores ‘bullseye’ as he leaves Donald Tusk ‘THUNDEROUS’ after speech today
Recent Posts
We and our partners use cookies on this site to improve our service, perform analytics, personalize advertising, measure advertising performance, and remember website preferences.Ok