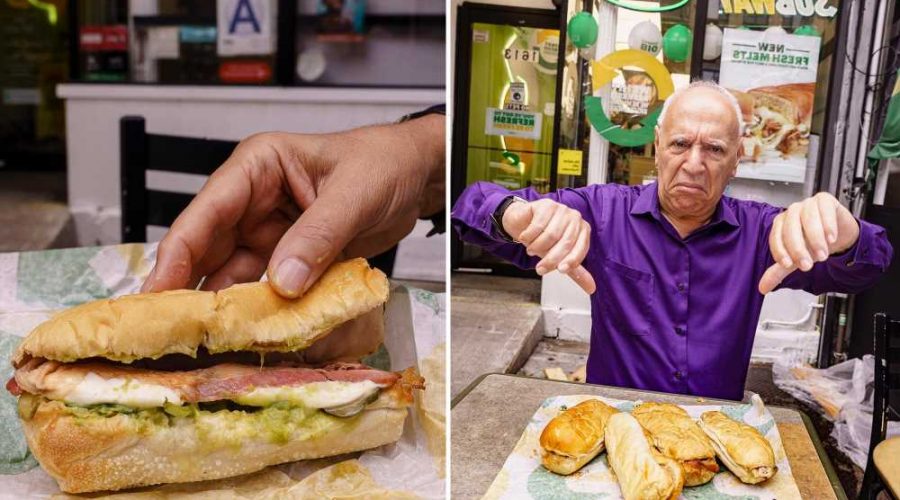 Times' 'restaurant of the summer' implodes over charges of 'colonialism,' 'misogyny'

The Subway sandwich chain’s new menu items, rolled out in a blaze of publicity on Tuesday, belong in the real subway — the deeper underground, the better.

The sandwiches are what you grudgingly put up with in an airport snack bar after a 14-hour flight. Strangely, the more elements they contain — from pickles to mustard to onions to olives — the less they taste of anything.

Poor Subway is under siege on all fronts. It closed thousands of stores worldwide in 2020. It’s battling disgruntled franchise holders and fending off charges that its “famous” tuna contains no tuna.

The menu update is supposed to bring salvation with all-new sandwiches and “improved ingredients” throughout the product line.

I took the plunge on “Turkey Cali Fresh” and “Steak Cali Fresh,” both served on what Subway calls “Italian artisan bread with crispy crust and soft center.” The crusts were mush, the centers doughy.

Chunks of mealy “steak” looked and tasted like Fourth of July barbecue leftovers. Oven-roasted turkey is “sliced deli thin” — but the flavor’s even thinner, tasting more like paper than poultry.

Hickory-smoked bacon on both sandwiches was a gristly, flavorless affair beyond rescue by a smear of smashed avocado. The only redeeming element was decent mozzarella from “award-winning cheesemakers in Wisconsin,” once I found it beneath a heap of spinach, gummy sauces and laughably lame tomato slices.

Consumer groups filed lawsuits. Subway responded that cooking the tuna breaks down the DNA so lab tests can’t detect it, but — trust us! — yes sireee, it’s all there.

In the spirit of science, I had it without any condiments, the better to focus on the problematic piscine.

It had a cat food-y perfume. It puzzlingly tasted like it might once have been tuna, but how long ago was beyond my trained palate’s ability to discern.

How long Subway can survive this latest debacle is anyone’s guess as well.