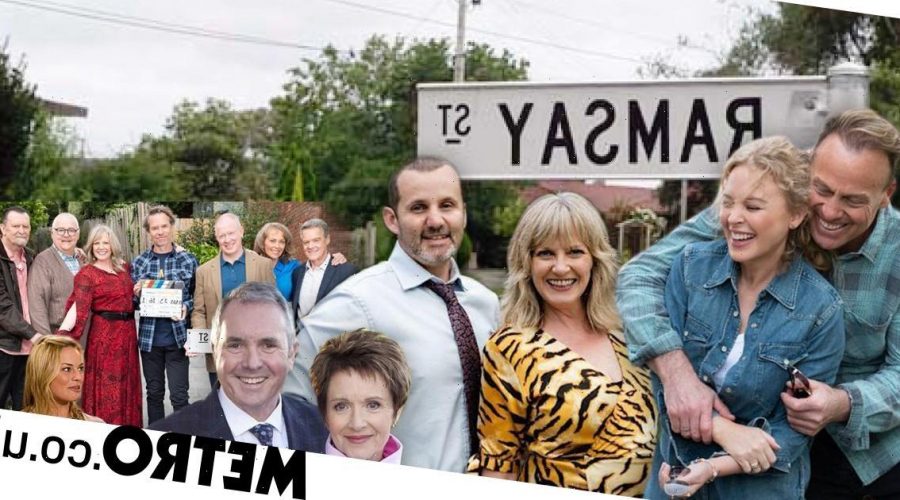 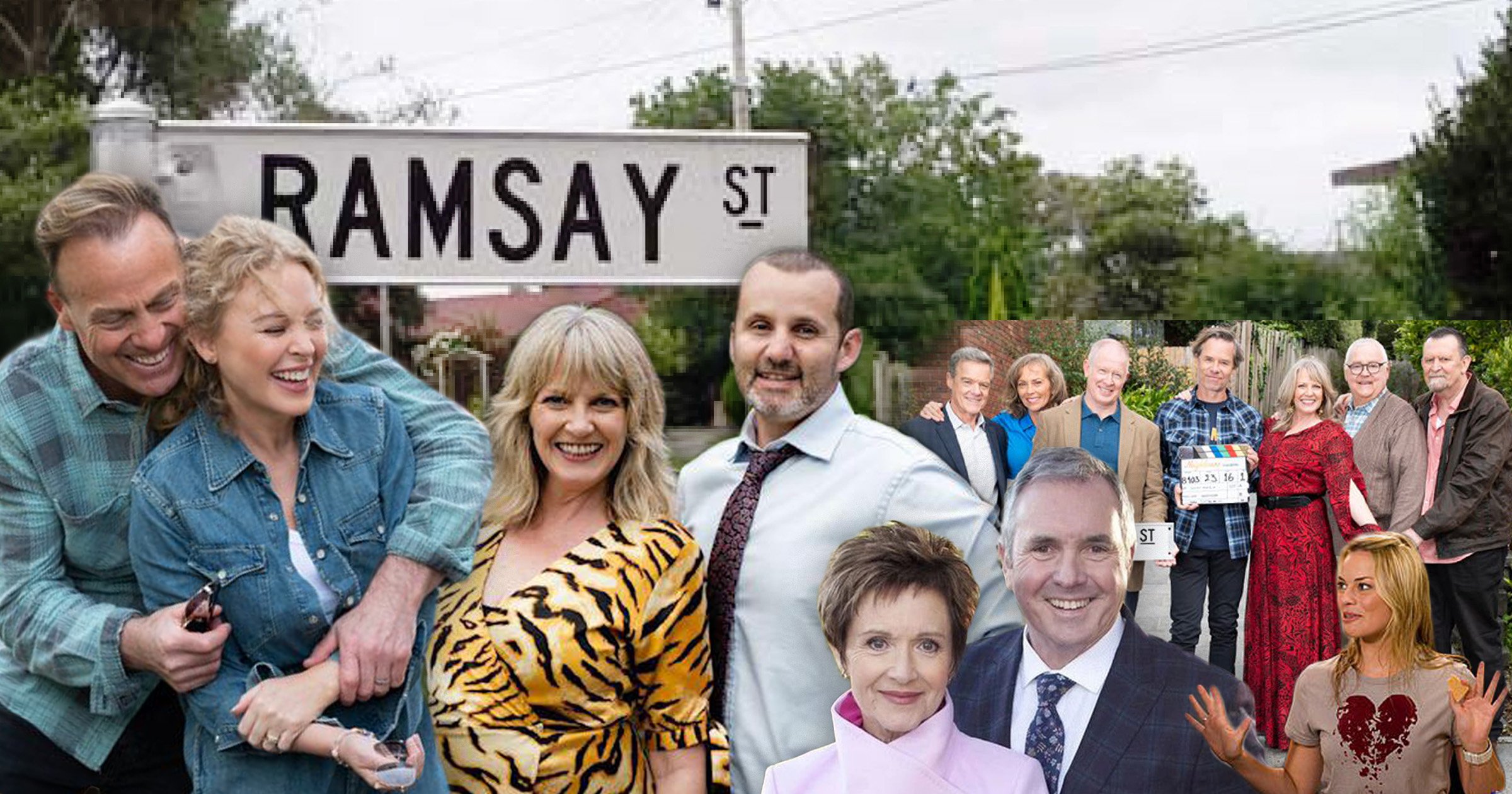 ‘Oh no! I used to rush home from school to watch it…’ is one of the most common reactions when you break the news to friends and family that Neighbours will end on Friday after a ‘strewth’-inducing 37 years and 8,903 episodes.

Everyone talks about EastEnders and Brookside changing the face of soap but Neighbours deserves just as much credit. The show has stayed true to its roots as a series about the interactions between normal people on a normal street in Oz. It has also given us some cultural icons since first airing on March 18, 1985, hitting a peak of 21million viewers in 1990.

So, how does it all finish? Well, it  has been a bumper final week of episodes in the UK but it all comes to an end on Friday with an episode at lunchtime before the hour-long finale at 9pm.

The action centres on the wedding of Toadie (Ryan Moloney) and Melanie Pearson (Lucinda Cowden) and we’ve already seen the returnof legendary characters such as Harold Bishop (Ian Smith), Joe Mangel (Mark Little) and Shane Ramsay (Peter O’Brien), with Kylie Minogue and Jason Donovan confirmed to return as Charlene and Scott in the final episode.

Beyond that? We’ll have to wait and see. But, before then, let’s look back at the highs and lows of life in Erinsborough…

From a cursed rock to a gangster’s daughter-turned-nun and a particularly tasteless storyline when a new Chinese family were accused of eating Julie Martin’s pet dog, we’ve seen some pretty leftfield plots emerging from the mad melting pot of the Ramsay Street world. We pick our weirdest of the weird below.

Loveable labrador retriever Bouncer arrived in 1987 and stayed in Ramsay Street for six years. Rather than reward him with a bone, the producers gave him a girlfriend – border collie Rosie – and one day in 1990, Bouncer dozed off and dreamed about tying the knot with his lady love.

Susan Kennedy wakes up with amnesia

In 2002, sensible Susan was caught up in a bizarre variation on the old amnesia storyline when she slipped on spilt milk, hit her head and woke up thinking she was still sweet 16.

A glance in the mirror sent the poor woman into a tailspin, but it was her sheer horror at the revelation that she was actually married to fortysomething Dr Karl that provided some (perhaps unintentional) laughs.

Dee Bliss comes back from the dead

Dee Bliss (Madeleine West) reappeared 13 years after disappearing when Toadie accidentally drove his car off a cliff on their wedding day. She was actually a lookalike, Andrea Somers, but the bonkers quota went off the scale when the real Dee popped up and it turned out they were twins.

Poor Toadie looked bewildered, even when he fathered a child with Andrea thinking she was his long-lost love.

So many Ramsay Street residents are now immortalised in the soap hall of fame. But these are the names that will live on in our minds for ever…

Original cast member Stefan Dennis played ‘Erinsborough’s JR’ for seven years before he quit in 1992 – only to return 12 years later. In the 2004 cliffhanger, a fire destroyed the Lassiters complex and Paul was later revealed as the arsonist – and the killer of witness Gus Cleary.

The Kennedy clan rocked up in Ramsay Street in 1994, and 28 years later Karl and Susan are the heart and soul of the show.

Their three kids have long since flown the nest and they’ve provided a home for many stray teens over the years, but still find time to open their mysterious blue box when feeling frisky.

Who would have thought that a teenage tearaway with the worst mullet in soap history would become an icon? Yet Toadie has done just that, maturing from the awkward teenager who first appeared in 1995 to a pillar of the community.

The two-hander episode where his beloved wife Sonya (Eve Morey) lost her battle with cancer was one of the best in the history of Neighbours.

The best Neighbours villains over the years

Paul Robinson may have his villainous moments, but he’s small fry compared to some of the others who have menaced the good folk of Ramsay Street…

Wicked schoolmaster Finn (Rob Mills) started his reign of terror by trying to steal Susan Kennedy’s headteacher position, before his crimes escalated into sabotage and murder.

Bizarrely, Susan took him in after he developed amnesia following a fall off a cliff and he seemed to have become a reformed character. But Evil Finn soon re-emerged…

While Izzy (Natalie Bassingthwaighte) might not be an out-and-out villain, she’s still a manipulative, money-hungry schemer who committed the cardinal sin of tempting Dr Karl away from saintly Susan.

For that alone she’ll be forever remembered as the wicked woman of Erinsborough. And now she’s back with her claws in the Kennedys’ son, Mal.

Resenting the absence of his dad Paul, Robert (Adam Hunter) planted a bomb on a plane to try to kill him. When that plan failed, he put his twin Cameron in a coma and headed to Erinsborough, masquerading as his brother and determined to finish what he started.

Goodness knows how he found the time to father the sweet and trusting Harlow with Prudence Wallace (Denise van Outen).

The global stars of Neighbours

Neighbours has been a training ground for many stars who moved  on to bigger and better things. Do  you remember them as these Erinsborough residents?

Kylie and Jason pop up in the final episode – Charlene complete with curly locks and denim overalls.

Guy played nice boy Mike Young for three years when Neighbours mania was at its height and his relationship with ‘Plain Jane Superbrain’ Harris (Annie Jones) was one of the show’s earliest romances.

Guy went on to Hollywood fame but Mike’s back for the finale. Will he reunite with Jane?

Margot quit soon after and headed to the States, and was nominated for an Oscar for the films I, Tonya and Bombshell.

The past 37 years have given us some classic stories, but these altered the Erinsborough landscape for ever…

One of the most iconic soap episodes ever was the wedding of Scott and Charlene in 1987.

The sweethearts tied the knot to Aussie rocker Angry Anderson’s surprisingly tender ballad Suddenly and lived happily ever after.

In 2005, Harold Bishop’s son David (Kevin Harrington), David’s wife Liljana (Marcella Russo) and their daughter Serena (Lara Sacher) were killed by a bomb on a flight to Tasmania.

It sparked a big change in God-fearing Harold, who blamed Paul and tried to strangle him.

For the show’s 35th anniversary, a week of late-night episodes aired in which several characters headed to a private island. A storm hit, giving ‘reformed’ Finn the chance to get rid of his enemies. More of a Wrong Turn-style horror than a cosy Neighbours episode, this was an experiment that worked well.