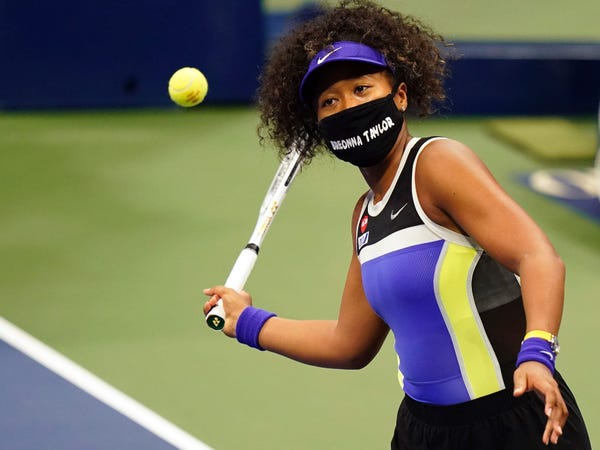 Naomi Osaka won her first-round match at the US Open Monday night, but she played for far more than an on-court victory.

When the 22-year-old tennis superstar arrived at Arthur Ashe Stadium for her opening-round contest, she was wearing a black mask with the words "Breonna Taylor" printed across the front in white letters. It had been 171 days since the police shot and killed Taylor while sleeping in her home in Louisville, Kentucky, when Osaka stepped on the court Monday evening. The world's highest-paid female athlete wanted to draw attention to the fact that the officers responsible for Taylor's death still have yet to be arrested.

"I'm aware that tennis is watched all over the world, and maybe there is someone that doesn't know Breonna Taylor's story," Osaka said after the match. "Maybe they'll like Google it or something. For me, just spreading awareness. I feel like the more people know the story, then the more interesting or interested they'll become in it."

One of tennis' brightest young stars, Osaka has been outspoken about racial injustice and police brutality in the US since George Floyd's killing during an arrest in Minneapolis. As the daughter of a Haitian father and a Japanese mother, she has spoken publicly about her own brushes with racism and has tried to use her platform to raise awareness of such issues.

Osaka's Breonna Taylor mask is just one of many steps the fourth-ranked player has taken to raise awareness of racial inequities in the United States in recent months. She dropped out of the Western & Southern Open last month in protest of police violence. After her resignation helped prompt a postponement across the entire sport, Osaka chose to participate and wore a "Black Lives Matter" shirt to keep the conversation surrounding racial injustice alive.

She plans to continue her efforts on the court and off, telling reporters after her 6-2, 5-7, 6-2 victory over Misaki Doi Monday night that she has six additional masks at the ready to honor six more victims of police brutality.

"I have seven," she said. "It's quite sad that seven masks isn't enough for the amount of names, so hopefully I'll get to the finals and you can see all of them."

Osaka will next take the court Wednesday, when she faces off against Camila Giorgi in the second round of the US Open. She won the tournament in 2018.

09/01/2020 lifestyle Comments Off on Naomi Osaka wore a Breonna Taylor mask heading into her first-round US Open victory
Recent Posts
We and our partners use cookies on this site to improve our service, perform analytics, personalize advertising, measure advertising performance, and remember website preferences.Ok