Mother, 36, who suffered four miscarriages in just over a year while trying for her first child with her husband says she’s ‘never been happier’ as she welcomes a baby boy

A delighted mum has finally celebrated the birth of her ‘miracle’ baby after suffering four miscarriages in just over a year.

Beth Sheriff, 36, from York, and partner partner Darren Woodhead, 35, lost five pregnancies in three years in what she described as the ‘hardest’ time in her life – but now she says has ‘never felt so happy’ after giving birth to little Felix.

The determined mum was first left with a heart-breaking decision in October 2017, when she was told she had to terminate her pregnancy – or risk losing her ability to walk.

She had suffered a severe slipped disc and required surgery, but had no idea she was five weeks pregnant until doctors at Hull Royal Hospital performed a routine check. 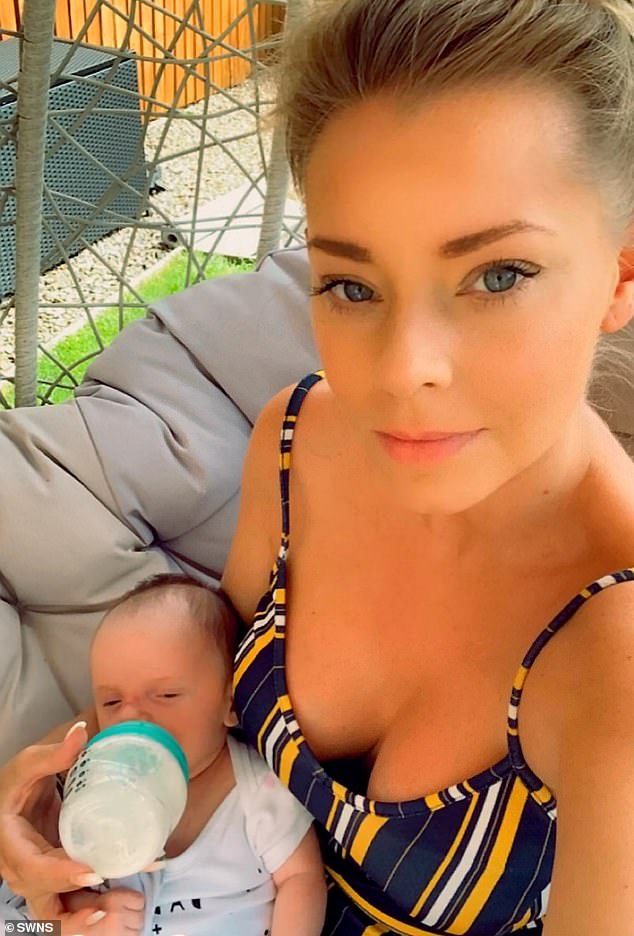 Beth Sheriff, 36, from York, has finally celebrated the birth of her ‘miracle’ baby after suffering four miscarriages in just over a year 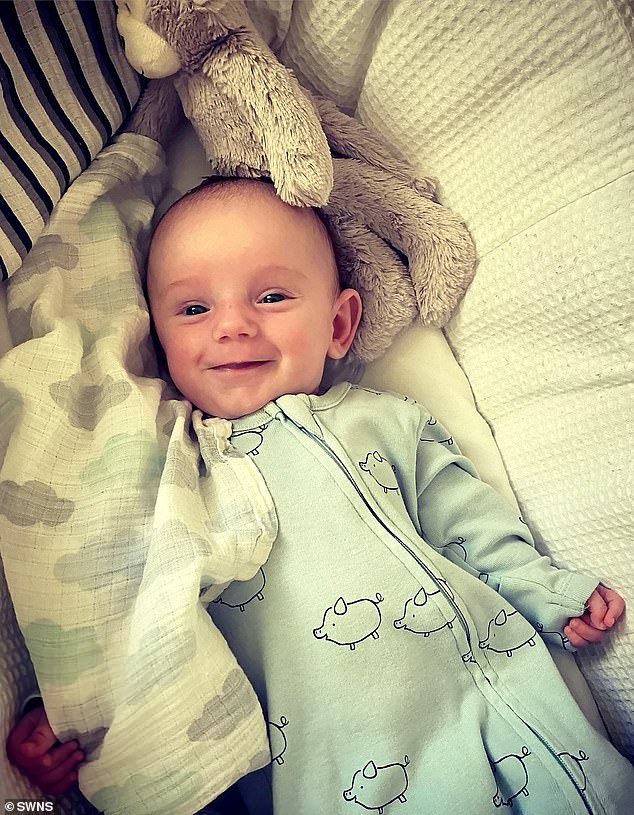 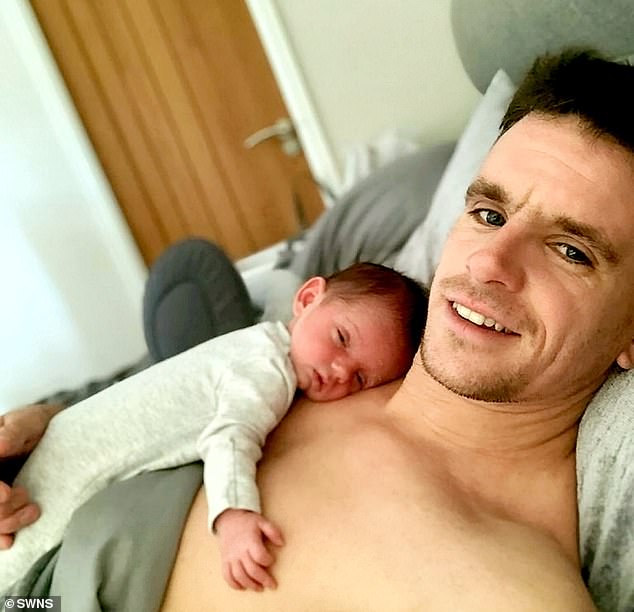 It was the toughest decision she’d ever made, and something she would ‘never, ever do’ in normal circumstances.

She said losing the baby made her and Darren realise that they wanted to have a family together.

But the pair suffered through four agonising miscarriages in the space of just over a year and were given no explanations.

Their three year nightmare finally came to an end on June 23 this year, when ‘beautiful’ Felix was born at York District Hospital weighing 6lbs 3oz. 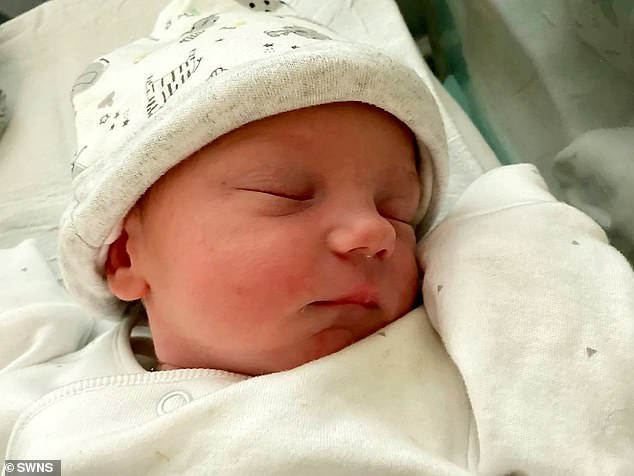 Speaking of Felix (pictured), Beth said: ‘It was sixth time lucky. He is our little miracle and we could not have asked for more. He has completed our little family.’ 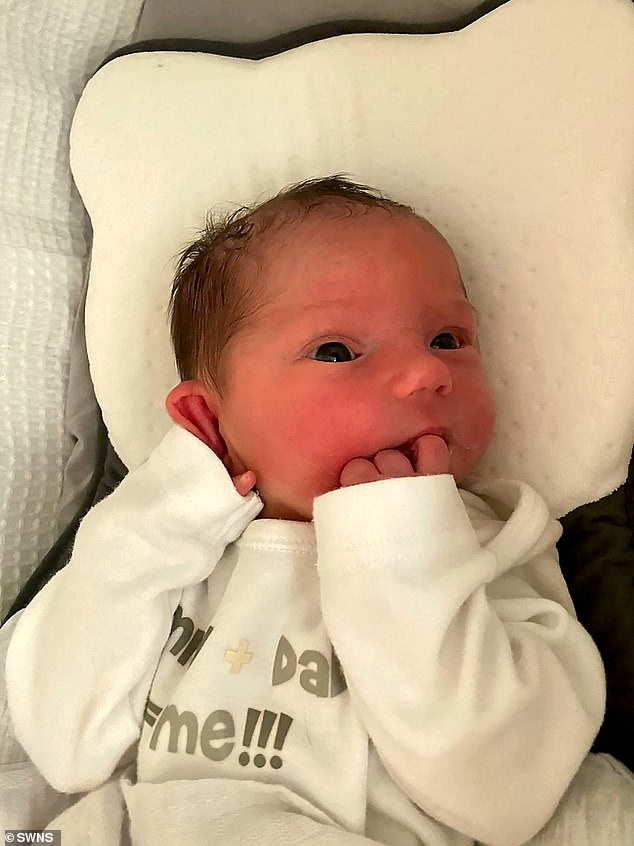 ‘Holding my beautiful little baby after everything we’d been through for the first time – it was just surreal,’ explained Beth. ‘I just felt so overwhelmed – I’ve never felt so happy in my life.

‘We named him Felix because it means lucky and that’s how we feel. There are no words to describe just how grateful and lucky we feel to have him with us.

‘It was so hard going through the recurrent miscarriages, just unimaginably painful. But now that he’s with us, this entire journey has been so worthwhile.’

The couple’s journey started in October 2017 in unexpected circumstances – as they had no idea she was pregnant.

The service advisor said: ‘I had a slipped disc and had gone to surgery and didn’t even know I was pregnant until I was in hospital and they did a few checks. 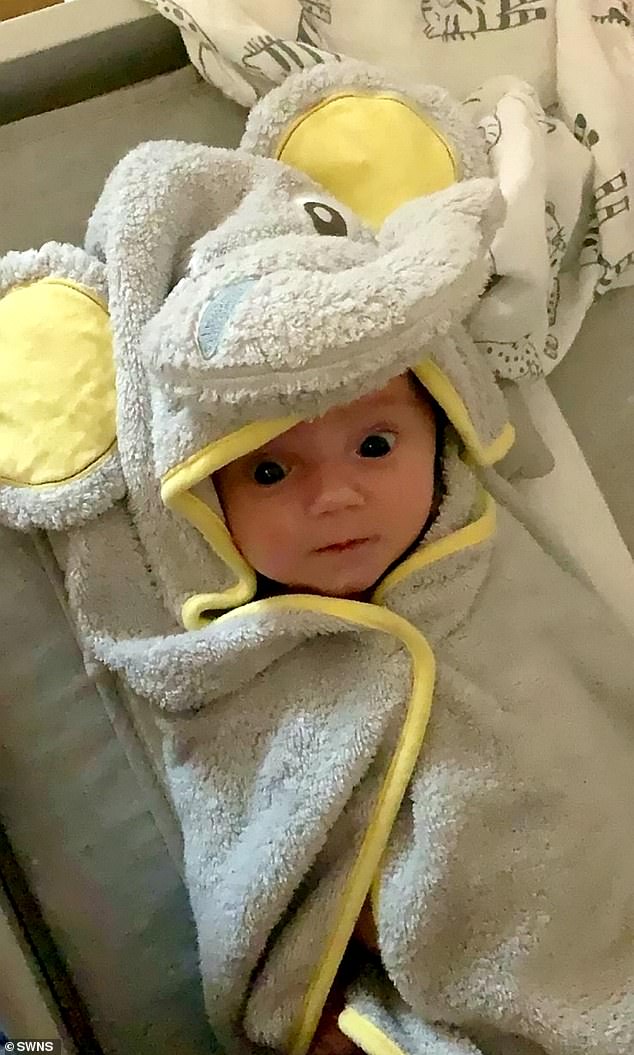 Beth said there was ‘ so much anxiety each and every day’ because she just wanted everything to be ‘perfect.’ Pictured, baby Felix 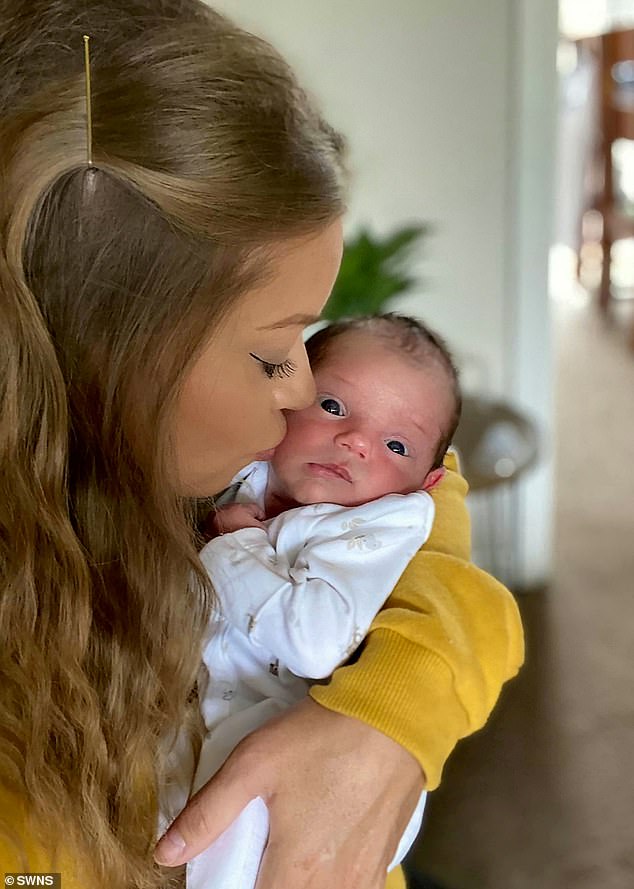 Doctors were unable to explain why Beth and Darren kept miscarrying which left her feeling frustrated. Pictured, with Felix 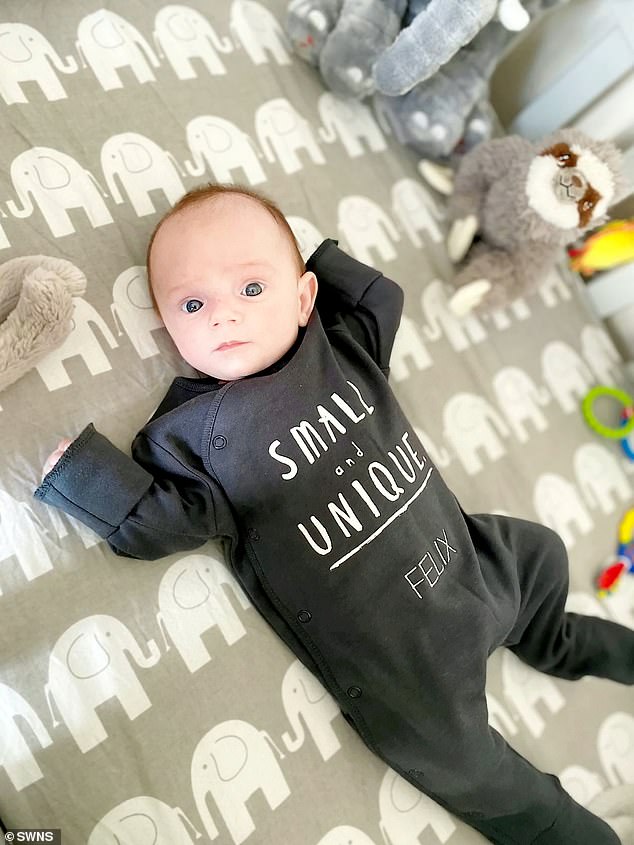 Speaking of her pregnancy, Beth said she and Darren were just taking it ‘a day at the time’ and hoping they’d keep pushing on without issues. Pictured, baby Felix

‘It was really shocking and unexpected but we were forced into a decision because they said my slipped disc was so severe it needed immediate surgery or I could lose the ability to walk.

‘It was the toughest decision I’ve had to make but the right one – and we decided to terminate the baby.

‘We knew we wanted children eventually, but we didn’t want one then or knew I was pregnant.

‘But terminating the pregnancy – it was such a difficult and dark moment for us as it’s something I would have never, ever done.’

The couple tried to have a baby soon after, but sadly she miscarried after six weeks in March 2018.

They tried again, but in June she miscarried for the second time, this time after eight weeks.

She was hoping to announce the good news to her family on Christmas Day but was left devastated when she found out she’d lost her baby. 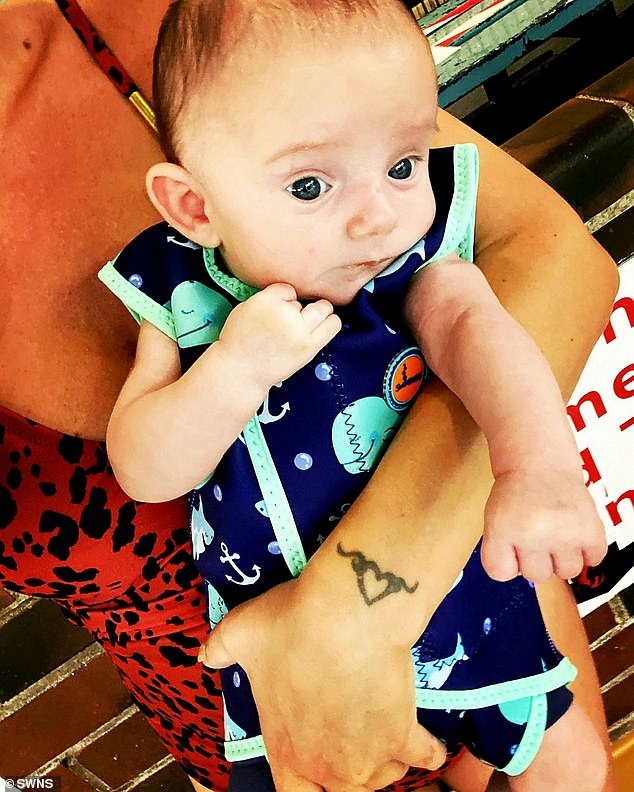 The pregnancy wasn’t without its issues, as Beth suffered bleeding at five weeks and again at 11. Pictured, baby Felix 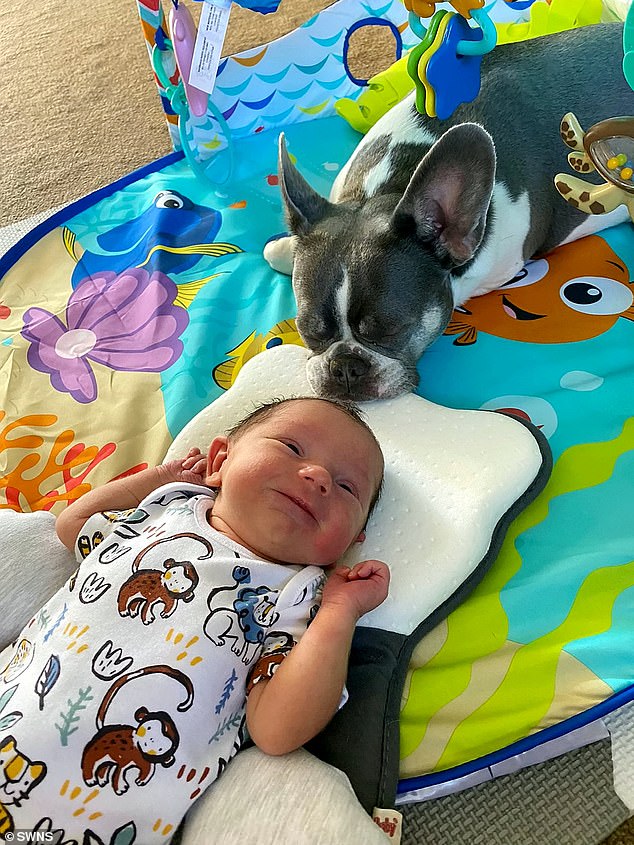 When Beth first felt Felix (pictured) move inside her, she felt ‘so happy’ and added that it was ‘just amazing’

Beth, who has a 15-year-old son called Joshua Cannon with a previous partner, said doctors were unable to explain why they kept miscarrying which left her feeling frustrated.

Tests revealed that in one of the miscarriages, the fetus had a missing chromosome linked to Turner Syndrome, but there were no explanations for the other failed pregnancies.

‘We just wanted to know why we couldn’t seem to have a baby,’ she said. ‘But after tests everything came back positive and they couldn’t explain it.’

‘It was hard to deal with every day. We were told there was no reason at all which made it more frustrating.

‘It was the most difficult time in my life – and we kept feeling like we were hitting rock bottom. But we kept trying and we never lost hope.’

In June 2019, Beth sadly miscarried again at 10 and a half weeks – her fourth in just over a year.

‘You feel like you can’t grieve because you haven’t had a baby yet but it still hurts so much,’ said the mum-of-two. ‘You just have to get up and carry on.’

‘I felt like I was grieving but no one knew what we were going through – it was very lonely. It’s not something you can talk about.’ 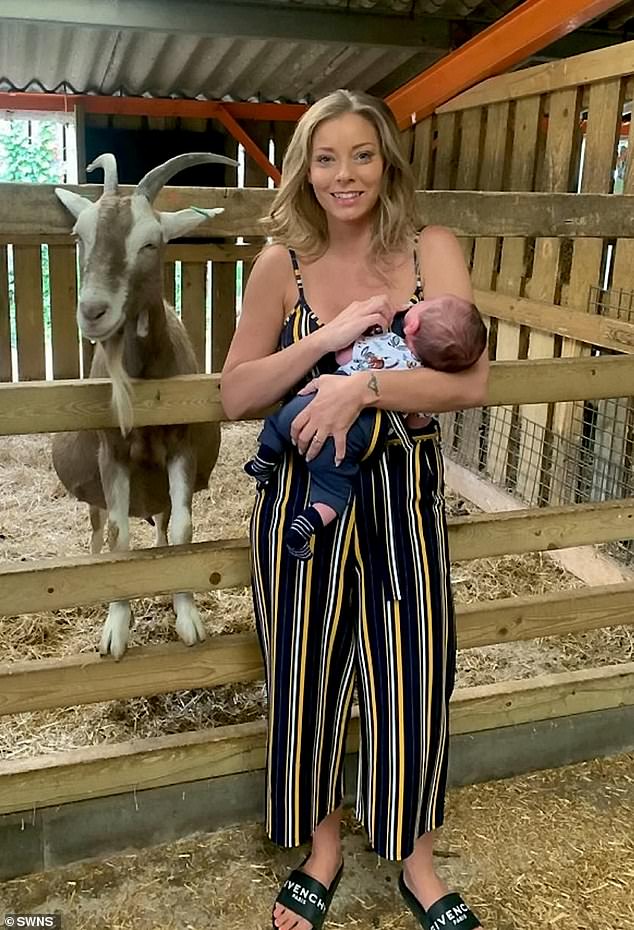 The determined mum was first left with a heart-breaking decision in October 2017, when she was told she had to terminate her pregnancy – or risk losing her ability to walk. Pictured, with baby Felix 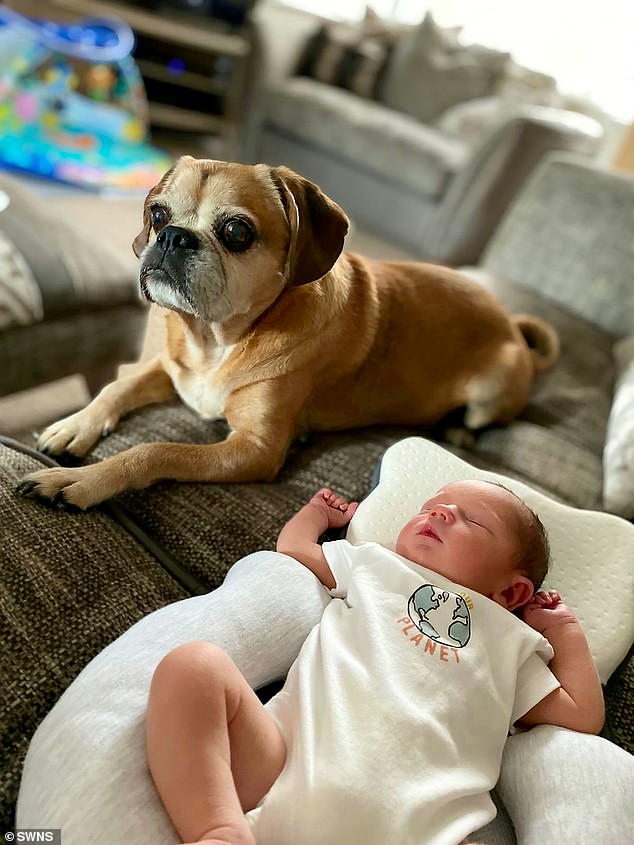 By the sixth attempt, she says their expectations were tempered to the point even partner Darren wasn’t optimistic – despite his usual encouraging demeanour.

‘We were just taking it a day at the time and hoping we’d keep pushing on without issues,’ she explained.

But the pregnancy wasn’t without its issues, as she suffered bleeding at five weeks and again at 11.

To add to the already mounting stress and anxiety, Beth was forced to have weekly scans which left her feeling uneasy.

She added: ‘There was just so much anxiety each and every day. We wanted this to be perfect but it was so stressful.

‘But when I first felt him move inside me I felt so happy – it was just amazing.’

Beth says she began to count the days until little Felix was born and wondered if he was ever coming.

But Felix is now 12 weeks old and enjoying life at home with his big brother Joshua and their family dogs Walter and Elmo.

09/21/2020 lifestyle Comments Off on Mum who suffered FOUR miscarriages has given birth to a 'miracle' baby
Recent Posts
We and our partners use cookies on this site to improve our service, perform analytics, personalize advertising, measure advertising performance, and remember website preferences.Ok