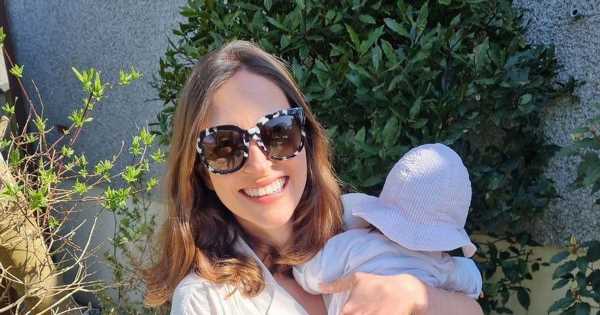 A woman who turned into a car park at night to breastfeed her screaming baby has been handed a £170 fine.

Amanda Ruggeri was driving from Newquay to her home in Cornwall on Sunday, May 2, with her husband when their three month old daughter began to be distressed and have a meltdown.

The couple parked at the Newquay Golf Club for 21 minutes in order to feed their baby girl and settle her.

Unfortunately, they were landed with a hefty fine which cost the family more than their one night holiday stay in Mousehole.

Amanda explained to CornwallLive: "Our baby suddenly became very distressed in the car.

"She's never a fan of the car, but this was a total meltdown – absolutely screaming and purple in the face.

"We had no idea if she was having some kind of health incident or what was going on."

Amanda said her husband pulled over at the first place he was able to – the golf club.

The duo didn’t know the area and so didn’t want to drive around “aimlessly” looking for a parking spot.

She said: "It was 7.51pm and the car park was empty, so we didn't think it would bother anyone.

"Turned out that our little girl was just very, very hungry and needed to be fed.

"I breastfed her for 20 minutes and then we left.

"We were issued with a ticket weeks later by Smart Parking Ltd, which managed Newquay Golf Club's car park, for an astounding £170 for being parked 'illegally' for 21 minutes."

Amanda believes that as she needed to breastfeed her baby she is covered by the 2010 Equality Act.

She said at that age, a breastfed baby feeds "on demand" because they don't have a feeding schedule yet. She explained: "We appealed to Smart Parking Ltd to drop the charge. In our appeal, we also mentioned that in our distress we hadn't even seen the signs that we weren't allowed to park there after hours."

However, the appeal was rejected and the company, according to Amanda, wouldn’t even engage with the couple.

They contacted Newquay Golf club for help, but were told: "I am sorry we are unable to assist with this matter and as Smart Parking operate the car park it can only be dealt with through them."

A golfer has stated that a sign tells visitors to register their vehicles using the club’s tablet, but it doesn’t say where this is.

Amanda claims she and her husband "don't want to cause trouble”, but believe they are being “discriminatory and frankly unlawful”.

They appealed last month, but were rejected and now have the option to appeal to POPLA.

She added: "The irony is that we were away for literally one night with our little one, our first time ever away with her, and this fine for feeding her cost far more than all our meals out and the other expenses of the trip put together."

Smart Parking and Newquay Golf Club have been contacted by the Daily Star for comment.

You can also read more lifestyle stories by signing up to our Hot Topics newsletter here.