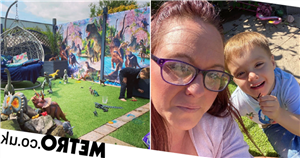 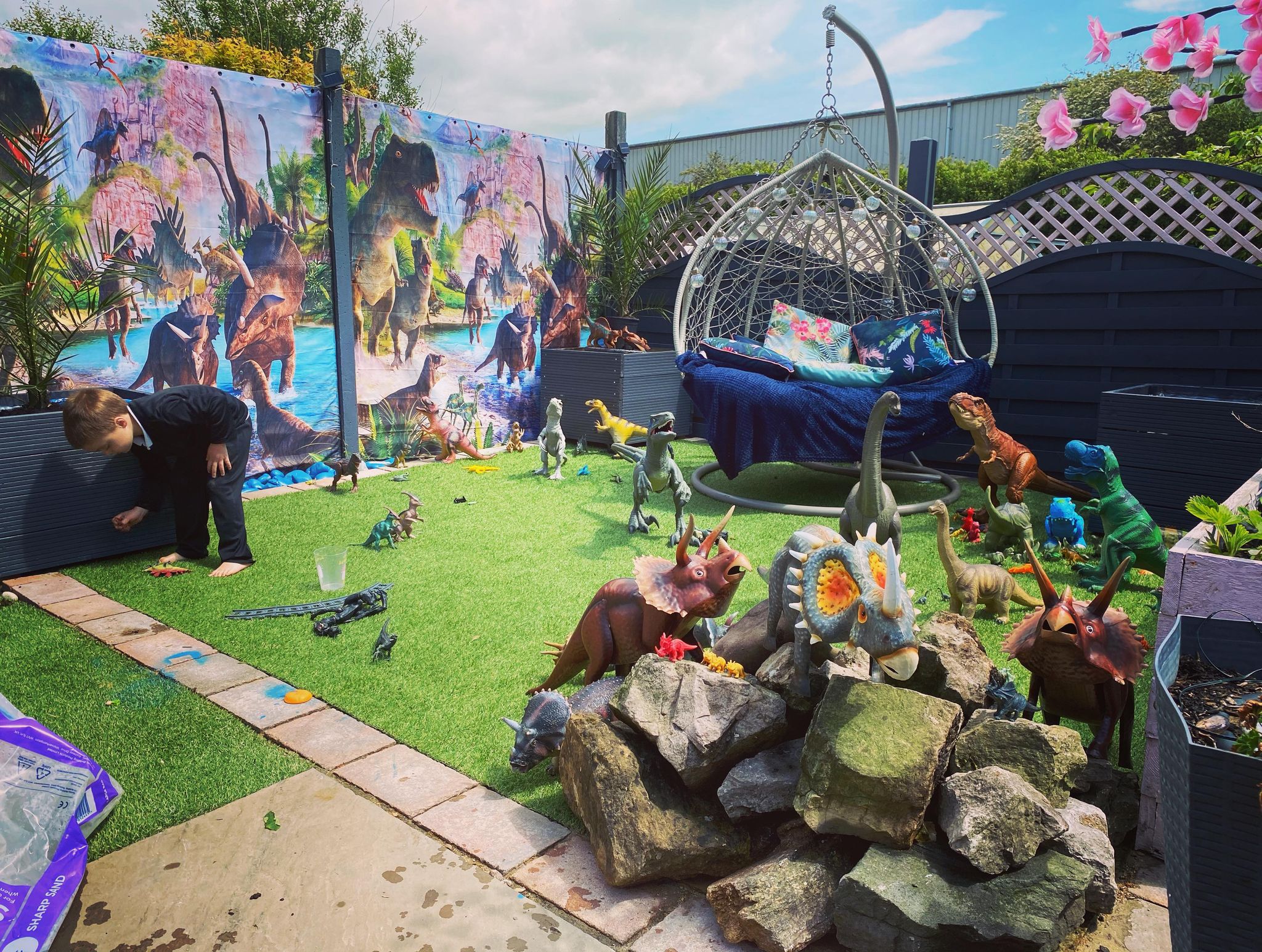 Loads of kids love dinosaurs, but not many get to enjoy them in their very own back garden.

Kellimarie House managed to make her son’s dream come to life by creating his very own Dinoland, and she saved thousands by doing it all herself.

The 35-year-old from Weston-super-Mare, who is an assistant practitioner for the NHS, says her son Bryson has always been completely obsessed with the prehistoric creatures.

She started off by making a miniature Dinoland for her little boy when he was a toddler.

‘Back then [when Bryson was two], we made a little square for him with 2×3 wood joined together,’ Kellimarie tells money-saving community LatestDeals.co.uk.

‘We painted it and filled it with compost and an upside-down plant pot painted black. We sanded it off to give it a volcano effect, and I got herbs for 50p each in Asda. I added glass stones which were recycled from my wedding bowls, and we also collected wood from the beach and woods.

‘He has since grown out of it now that he’s five, but I soon came up with an idea.’

Fortuitously, Kellimarie was getting rid of her garden decking as it had had rotted underneath, which gave her a 12×12 foot area to play with.

‘So, I decided that I was going to make him a bigger Dinoland to play in,’ she explains.

Some of Kellimarie’s inspiration came from browsing Facebook groups.

‘I saw that people had begun hanging shower curtains up in their gardens for decorative effect, and I thought they must sell dinosaur ones,’ she says. ‘Fortunately I was able to find some amazing dinosaur shower curtains for just £12 each.’

The rest of the supplies were also cheaply sourced.

‘I collected a load of stones for free off Facebook Marketplace to use as drainage, and I managed to get sand from Marketplace as well for just £20. The rockery and edging stones were from Facebook too, free to collect,’ says Kellimarie.

‘The four garden dinosaurs were just £16 from Olive and Sage. They came under a “buy two get one free” deal. Unfortunately some are now out of stock, so I couldn’t purchase them all, or I would have! They are great value for money.

‘I bought my two Phoenix palms from B&Q. These were also a fantastic deal, as in most places they are sold for over £30 each. I got mine in a two-for-£14 offer.

‘I created the planters myself by recycling my old decking. This saved more money as I only had to buy the screws.’

Kellimarie says the most expensive part was the grass.

‘I got the Orlando variety from Grass Direct and it cost £160,’ she says. ‘However, I wasn’t too concerned about that price after I spoke with the lady I collected the stones from off Facebook. She said she had been quoted £4,000 for her artificial grass to be applied!’

‘First, I cemented in the edging stones, then I filled in the area with stone and levelled it off with sand before I laid down the grass,’ she says.

Now, Kellimarie has an exciting outdoor space for her son, with more than 15 dinosaurs of various sizes roaming the area and a backdrop of even more, thanks to her shower curtains.

The area also features a collection of rockery, which some of the dinosaurs are climbing, and an egg chair complete with blanket and cushions for relaxing in the sunshine.

We met Bryson feels like he is living his own Jurassic adventure every day.