Before the premiers and chief ministers meet the prime minister for the monthly national cabinet meeting on Wednesday, chief health officers will brief them on the implications of scaling back the current seven-day isolation period for those who test positive for COVID-19. Like many aspects of this pandemic, it is a contentious proposal.

Reducing the isolation period was raised at national cabinet last month but was not backed by advice from Chief Medical Officer Paul Kelly before an expected peak in cases of the BA.4/5 Omicron variant. At a time when hospitals across Australia were being overwhelmed not just by COVID-19 patients but by those suffering from various other winter viruses, it was the right call. 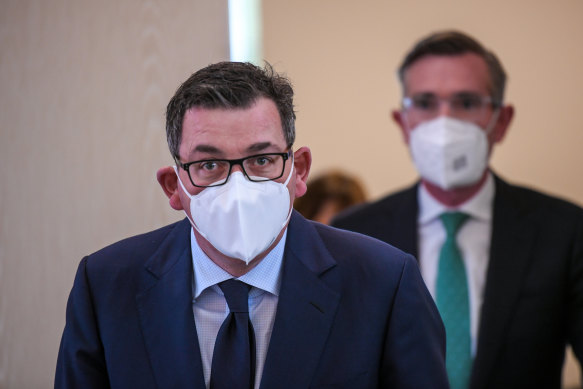 Daniel Andrews and Dominic Perrottet have had differing views on how long people should isolate after testing positive with COVID-19.Credit: Justin McManus

But as winter comes to an end, and the number of COVID-19 cases falls to the lowest level this year, it is an appropriate time for a rethink on how long people should isolate.

Leading the charge on winding back the time is NSW Premier Dominic Perrottet, while Premier Daniel Andrews has taken a more cautious approach. Considering Victoria’s upcoming election is being largely fought on a health system that is already under strain, it is hardly surprising that Andrews would take a more conservative view. If shortening the isolation period were to put further burdens on the health system, it would be a political liability for Andrews.

Some nations, such as the United States, have introduced five days of isolation, while others base the isolation period on testing. Singapore requires those who are fully vaccinated to isolate for at least 72 hours from their positive test result. They are then allowed to leave once they test negative on a rapid antigen test or reach day seven.

The scientific evidence on what is the best process is not always clear. Adrian Esterman, professor of biostatistics at the University of South Australia, said half of those with COVID-19 were still infectious on day five, while a quarter were infectious on day seven and almost none on day 10. But Associate Professor James Wood, a mathematician at UNSW’s School of Public Health and Community Medicine, contends that only 10 to 15 per cent of transmission happened after day five of an infection, and this would be unlikely to lead to rising case numbers given the declining reproduction rate of the outbreak.

The Age would argue that, as the NSW and Victorian premiers agree, any change needs to be national. The decision needs to be based on evidence. There should be enough real-world examples of the differing criteria for isolation in various nations to be able to make an informed decision on what the consequences of changing the criteria of isolation would be for the health system. That advice must be make publicly available.

It must also be understood that if the isolation period is changed, it would be difficult to return to the present isolation period if circumstances were to change for the worse – such as the emergence of a new variant – leading to a new surge.

As a principle, with the backing of scientific evidence, The Age supports the view that responsibility for the period of isolation should be gradually shifted from being mandated by the state to being a decision for individuals. But that must be weighed against the pressures this may place on our health system.

Gay Alcorn sends an exclusive newsletter to subscribers each week. Sign up to receive her Note from the Editor.