Impossibly organised mother, 29, reveals she finished her Christmas shopping two MONTHS ago after starting to buy gifts in MAY (and she’s done all of her wrapping, too)

A mother-of-two has revealed she finished her Christmas shopping three months early – and she’s even wrapped up presents for her baby nephew, who isn’t due to be born until next week.

Becki Edwards, from Ashton-under-Lyne, Greater Manchester, started shopping for the festive season back in May, shortly after her son Dylan, two, and daughter Lola, four, celebrated their birthdays.

Every time the kids mention something they want, she makes a quick note of it on her phone, before keeping an eye out for bargains as the long nights draw in.

The 29-year-old hides the majority of the wrapped presents in her loft, but after running out of room, she’s started stuffing them in the downstairs bathroom.

As soon as Christmas cards hit the shops in September, Becki snapped them up, and completed her gift shopping the same month. 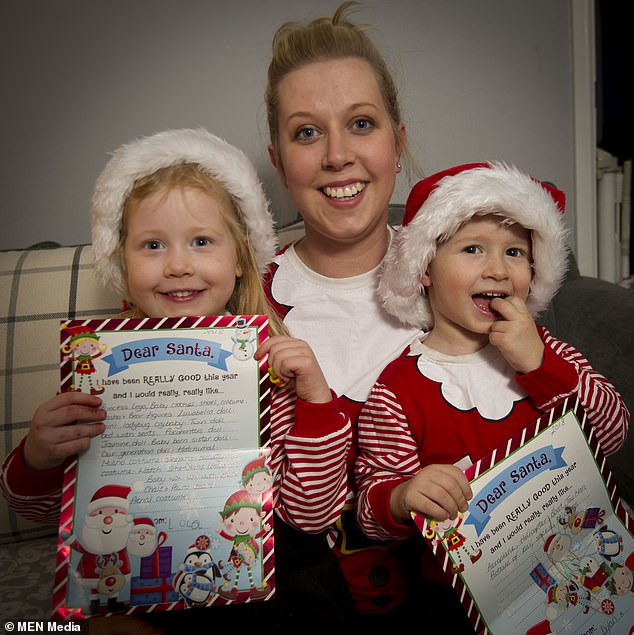 Becki Edwards, from Ashton-under-Lyne, Greater Manchester, finished all of her Christmas shopping in September. She started buying presents in May after the birthdays of her two children – Lola, two, and Dylan, four (pictured) 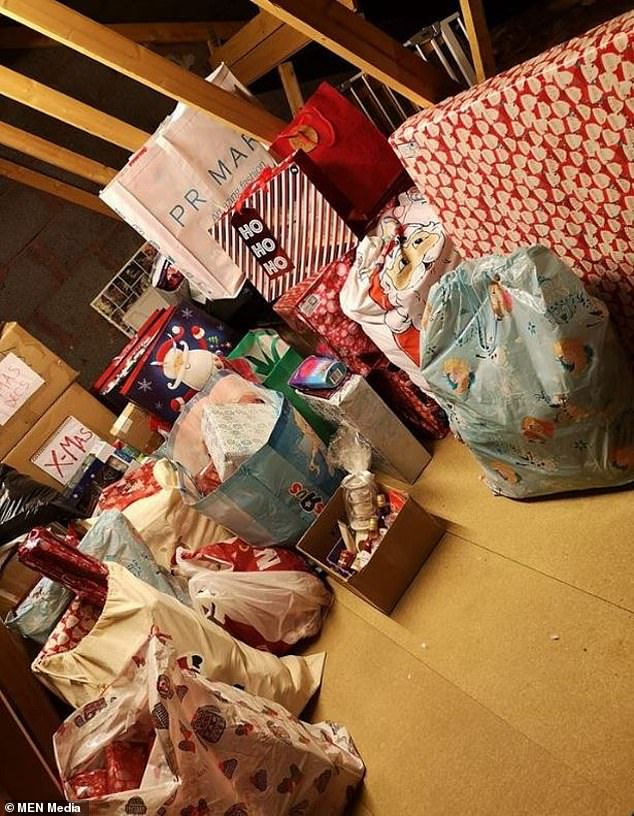 The wrapped up presents (pictured) are hidden in the loft or in the downstairs bathroom. The engineer dispatcher said she spends around £150 on each of her children – but struggles to keep a track of things as she starts buying items so early

Becki said: ‘Lola started hers after her birthday saying “I want that”, so I said “it can go on your Christmas list”, so I just start to make a note of things on my phone.

‘And if I spot it reduced or on offer or something then I buy it.

‘Most things are wrapped in the loft but I have something in most rooms, even the downstairs toilet. I’ve even wrapped and bagged all the things for stockings.’

The incredibly organised mother admits she has a slight addiction to shopping, saying she ‘can’t go a couple of days without buying or ordering something online’.

Although it means her 29-year-old husband, Shaun, who works in recruitment, never has to worry about birthdays or Christmas, he often gets annoyed at her for buying too much.

Becki, who works part-time as an engineer dispatcher, said: ‘My husband thinks I have a problem. He’s constantly telling me off for buying more things. Or saying “it’s August Becki, Christmas is months away”.’ 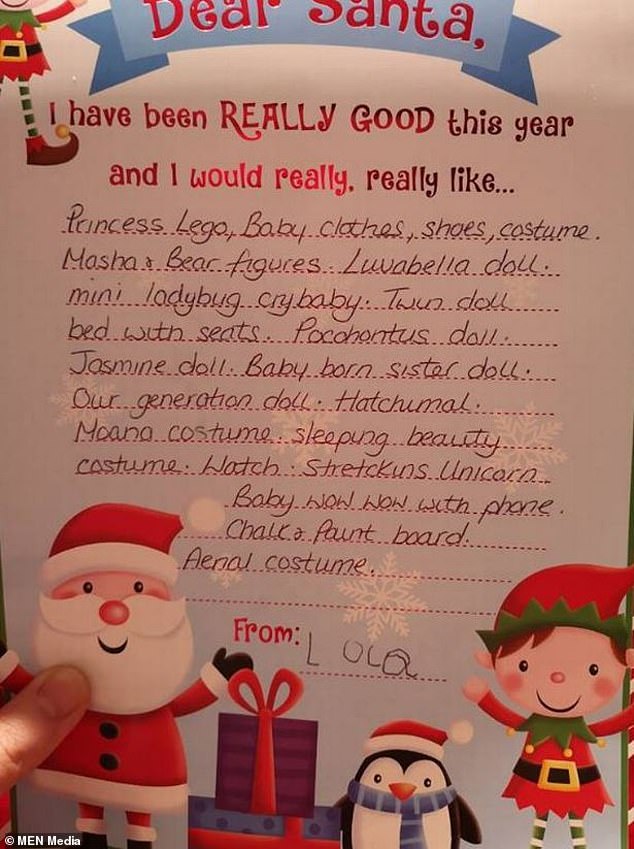 After finishing up her own Christmas list, Becki helps out her grandparents too – buying presents for their four children, seven grandchildren, and six great grandchildren.

Admitting she’s a ‘bit of a control freak’, Becki has also created Christmas lists for her auntie as well as her uncle.

While many families might think such early planning would take away the magic of Christmas, Becki says it has the opposite effect.

Becki said: ‘I think it makes it more amazing. Spreading it out as long as possible. Then come Christmas morning when you see the kids’ faces and the house is full of presents and ripped up paper and mess and family, every second is worth it.

‘I love having my house full at Christmas. Its all about family for me.’

Becki buys gifts she knows the kids will like in the months leading up to Christmas. Then when they do their letters to Santa, she’ll give those ideas to family and friends.

She said: ‘They’re quite typical my two. Dylan loves trucks and cars and typical boy stuff. 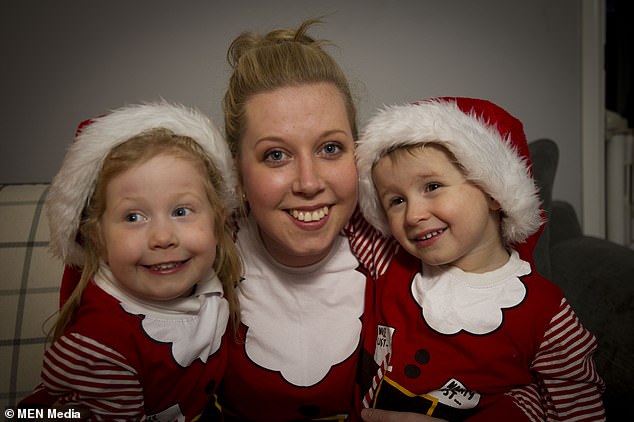 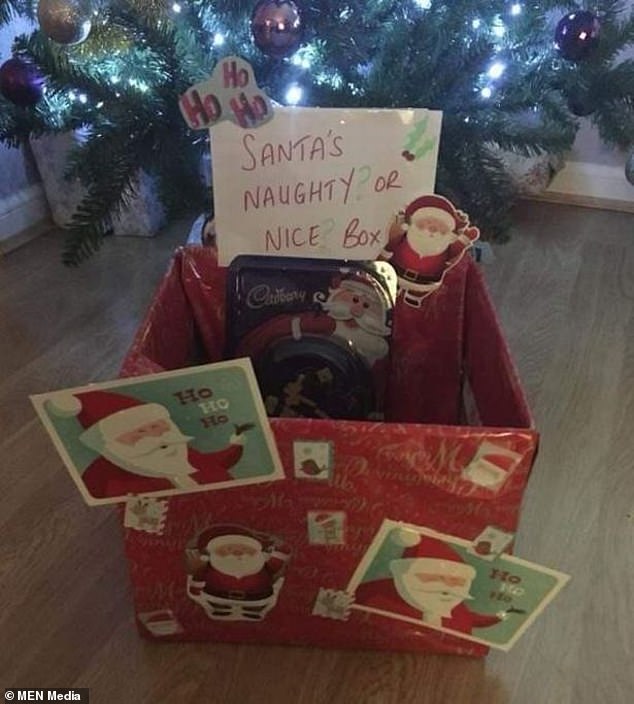 In December, the presents are put under the tree – but if they misbehave, one of their presents is moved into Santa’s naughty box and will only be removed if they are good the rest of the day

‘He’s Fireman Sam mad so has a lot of those things for Christmas. And my daughter is doll mad. Baby dolls. Barbie dolls. Disney dolls. So they’re quite easy to buy for.

‘Plus I can’t stand missing out on a bargain. I’ve even put a few things away for my daughter’s birthday in May.

‘I don’t set myself a budget. Well, I try. But because I start so early, I lose track of what I spend. I don’t go mad though. They don’t have stupidly expensive things luckily.

‘It’s probably say £150 each max. I don’t like spoiling them. And I always make sure they don’t get everything on their Christmas lists.

‘I like to teach them that they don’t always get what they want. That’s how I was brought up.’

Becki admits to having a slightly ‘morbid’ reason for planning so far in advance, adding: ‘I also have the thought that if anything happens to me or I get poorly or end up in hospital, I at least know everyone is sorted for Christmas and I don’t have to send my husband out shopping.’

But she also uses it to her advantage.

Becki said: ‘Presents from family and friends always go under the tree. And we also have a naughty or nice box.

‘If the kids are naughty then a present from under the tree goes in the box. They have to be good the rest of the day to get it back under the tree.’