A mother has been blasted online after asking her husband to dip into his daughter’s college fund to to pay for her son’s wedding.

The unnamed mother, believed to be from the US, shared her story on Reddit’s Am I the A******, and it later resurfaced on the Facebook’s That it, I’m Wedding Shaming group.

She explained her son doesn’t have the money to finance his own wedding, and that she had asked her husband, who has a daughter from a previous relationship, to take some money out of her college funds to place towards the nuptials.

The husband refused to oblige, and Facebook and Reddit  users have sided with him, calling the mother-of-the-groom entitled, and praising the father for standing up for his daughter. 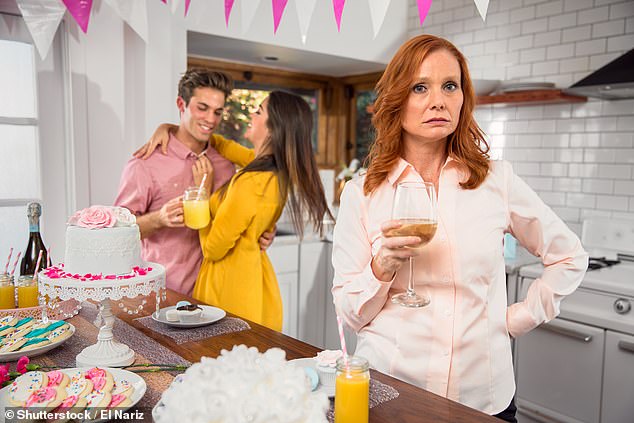 A mother-of-the-groom believed to be from the US was slammed online after asking her husband to take money from his daughter’s college funds to pay for her son’s wedding (pictured: a mother-in-law in front of her son and his fiancee, stock picture)

Explaining the situation, the mother-of-the-groom wrote: ‘My son is getting married in December.

‘He’s been struggling to get a new job after he left his old job and job search took way longer than expected.

‘We can’t afford the whole wedding now and we can’t change the wedding date since his fiancée refused,’ she added.

She went on to say she asked her husband for some money from his 16-year-old daughter’s college fund, but his reaction was not what she had been hoping for. 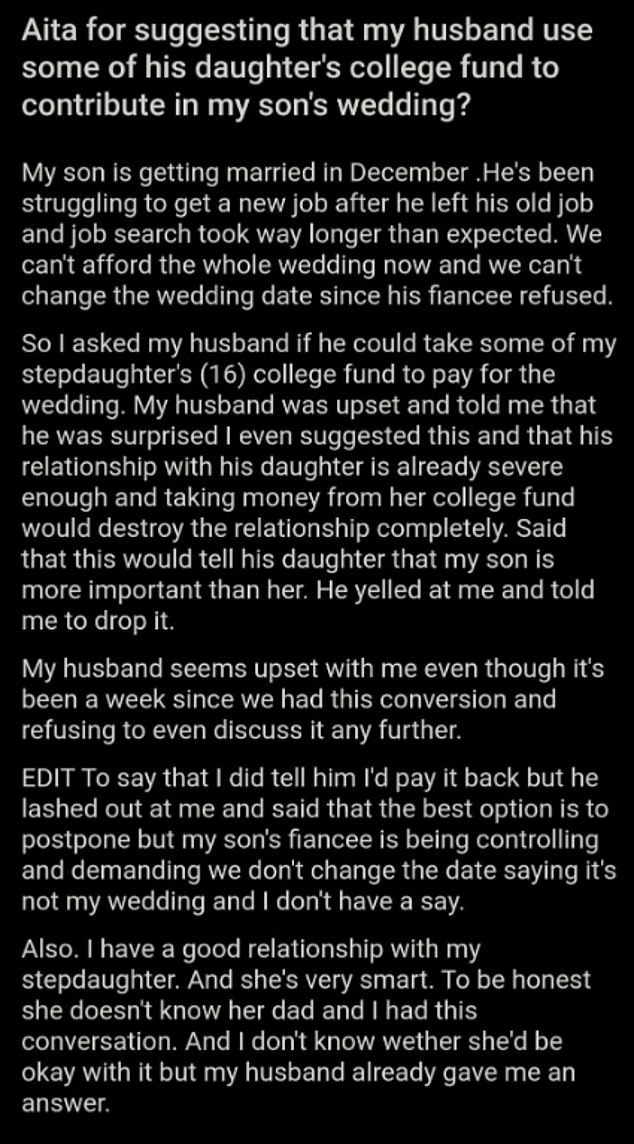 The mother shared her story on Reddit, where she explained she had intended to give the money back to her husband

‘My husband was upset and told me that he was surprised I even suggested this,’ she said.

She added that her husban’d relationship with his daughter is already strained and that ‘taking money from her college fund would destroy the relationship completely’.

Her husband said it would signal to his daughter that his wife’s son is ‘more important than her’.

He yelled at me and told me to drop it,’ she added.

Even a week after she initially had asked, the husband was still upset with her for making the suggestion.

People sided with the woman’s husband, highlighting the fact it was the son’s job to revise his expectations to fit his new budget

In an edit to her original post, she added she had offered to pay her husband back and added that postponing was not an option, due to her son’s ‘controlling’ fiancée.

She added she had a ‘good relationship’ with her step-daughter who is very smart.

‘To be honest she doesn’t know her dad and I had this conversation. And I don’t know wether she’d be okay with it but my husband already gave me an answer,’ she said.

People sided with the father, slamming the mother-of-the-groom for even suggesting the idea, calling her entitled.

‘How could you even ask that? That’s her college money, not your son’s wedding money. Your son and his fiancée need to figure something out, in a way that doesn’t involve stealing from a 16-year-old. Sheesh lady,’ one wrote.

‘A one time event vs an education…sure yeah that’s a fair swap,’ one said.

‘Guess you can’t have the wedding you wanted and need to scale back or let junior and his fiancée figure out how to afford his own wedding,’ said another.

‘Or just tell your son and his fiancée to finance their own wedding,’ agreed another.

‘It’s his daughter’s to use for college and by using the money, you’re telling the daughter that your son’s wedding is more important than her college education. Just have a simple ceremony and leave it at that until you can have a proper celebration when your son can get a stable job,’ one wrote.

‘“My son quit his job before getting another one, and while planning a wedding. AITA for wanting to use my step daughters college fund to make up for his irresponsibility”,’ another summed up.

One praised the father for sticking with his daughter and refusing to give the money.

‘Well good on the father for being so firm on his answer and standing by his daughter. Nice to see.

One did not understand how the mother could even ask her husband for the college money, knowing her step-daughter could suffer the consequences

Some pointed out December was not a great month to get married anyways because of the coronavirus pandemic.

‘How about pay for your own damn wedding, it’s 2020, better yet wait til the pandemic is over.’

And some said the fiancée’s demands should not dictate the wedding date.

‘Geez the entitlement makes me angry! You don’t have the cash, don’t get married or have a small one! Why do you expect others to foot the bill for you! What does the fiancée want next? A new house for when she gets pregnant,’ one said.

‘Spending money to raise her kid? Her mom obviously never said no to her growing up,’ they went on.

‘“I’m not changing the date of my wedding” well honey you ain’t gonna have a wedding if you ain’t got the money for it,’ one said.

‘If you don’t have the money, then don’t have a big wedding. Taking money from a college fund is ridiculous,’ another wrote.

11/15/2020 lifestyle Comments Off on Mother is slammed for entitled wedding ask to fund her son's wedding
Recent Posts
We and our partners use cookies on this site to improve our service, perform analytics, personalize advertising, measure advertising performance, and remember website preferences.Ok