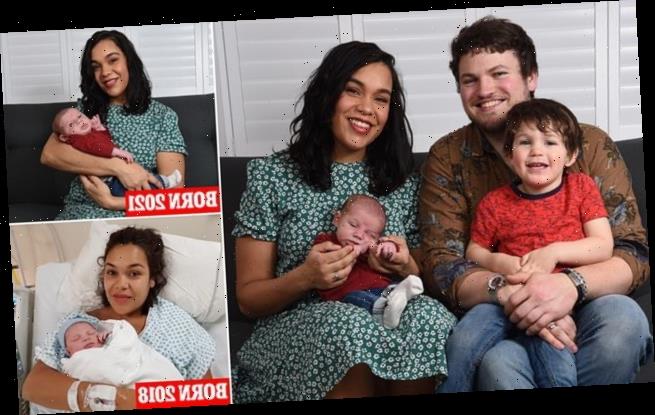 Mother, 33, who was told she would ‘never have children’ gives birth to ‘twin’ boys more than TWO YEARS apart after IVF treatment

A mother who was told she would ‘never’ have children has given birth to twins more than two years apart thanks to IVF treatment.

Amanda Hill, 33, from Stoke Golding, Warwickshire, has welcomed two sons who were conceived through IVF on the same day, but were born more than two years apart.

Her son Oryn, two, and newborn Taylen are technically fraternal twins beause they were conceived using embryos from the same batch, fertilised and frozen in 2018.

Amanda was told that she would ‘never’ have children after she went through the menopause at age 11 and her ovaries stopped working at age 13, leading to her being diagnosed with premature ovarian failure.

The devastating news led to a period of depression for the fitness instructor, who had always wanted to be a mother. 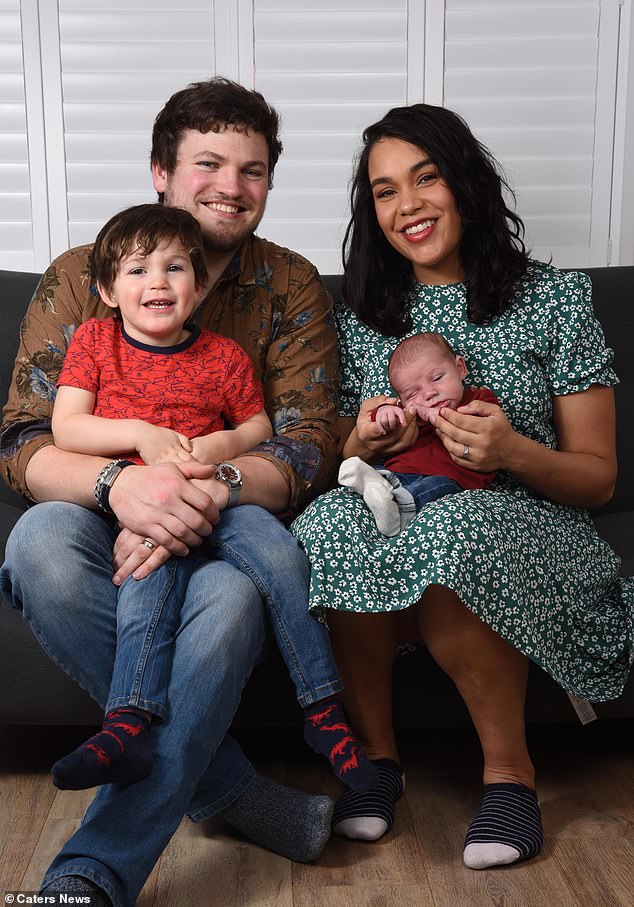 Amanda Hill, 33, (pictured with husband Tom and sons Oryn, two, and Taylen) welcomed two sons who were conceived through IVF on the same day, but born more than two years apart 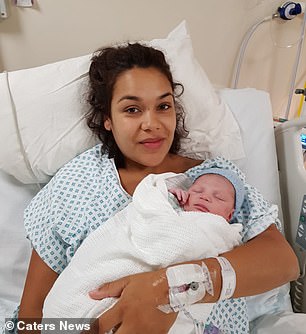 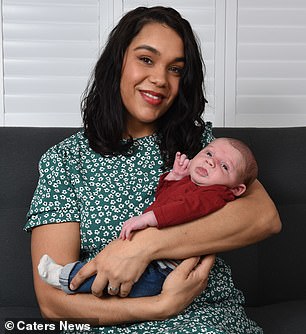 Amanda, from Stoke Golding, Warwickshire, gave brith to her firstborn Oryn, two, (left) in August 2018 while his twin brother Taylen (right) was born just weeks ago on February 24

But Amanda has amazingly given birth to two sons who were conceived using IVF, with the help of a single egg donor, on the same day back in 2018.

Her firstborn Oryn, two, was born in August 2018 while his twin brother Taylen was born just weeks ago on February 24.

She said: ‘The odds were against me so I feel extremely lucky to have undergone two successful rounds.’

Amanda underwent treatment at Care Fertility and both embryos were formed in 2018 from an anonymous egg donor and her 30-year-old husband Tom’s sperm.

What is premature ovarian failure?

Early menopause happens when a woman’s periods stop before the age of 45. It can happen naturally, or as a side effect of some treatments.

For most women, the menopause starts between the ages of 45 and 55.

The cause of premature ovarian failure is often unknown, but in some women it may be caused by chromosome abnormalities, an autoimmune disease, or in rare cases certain infections.

Premature ovarian failure can sometimes run in families. This might be the case if your relatives went through menopause at a young age (20s or early 30s).

Amanda explained that she wanted Oryn to have a sibling so he had ‘someone to relate to’ because other people wouldn’t understand what it was like to be a ‘donor baby’.

She also admitted that it felt ‘quite weird’ that the second embryo had been ‘sat in the freezer for years’.

She continued: ‘It was important for me to have two children so Oryn didn’t feel alone.

‘I wanted him to have a sibling so he always had someone to relate to as no one will understand what it’s like to be a donor baby – but them.

‘It’s quite weird that Taylen has been sat in the freezer for years. But now, he is finally here and we couldn’t be happier.’

Ahead of both pregnancies, Amanda was advised to go on hormone replacement therapy to boost oestrogen and help keep her womb healthy so she could carry a baby.

Overall, the smitten couple spent £14,500 on a credit card to fund the in vitro fertilisation treatment.

Speaking about her premature ovarian failure, Amanda admitted that it was ‘so tough’ to be told at age 13 that she could ‘never have children’.

Amanda explained: ‘My periods started when I was ten and then completely stopped by the time I was 11.

‘I was told I will never have children at 13 when I was diagnosed with premature ovarian failure.

‘It was so tough as I felt like there was no one to talk too and I ended up with depression by the time I was 16.’

But Amanda said that she became ‘more aware’ of the different ways to become a mother and felt ‘relaxed’ by the time she had to choose an egg donor for her children.

She continued: ‘As the years passed, I became more aware of different ways to become a mum.

‘So when the time came to select the egg donor, I was quite relaxed.

‘I just asked for someone mixed race and managed to find someone who on paper sounded like me. She was my height with the same eye colour.’ 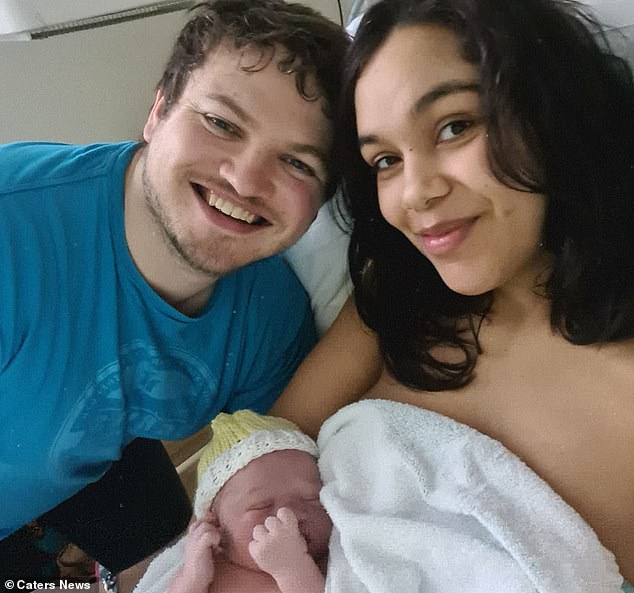 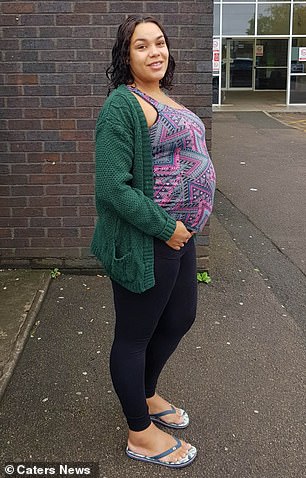 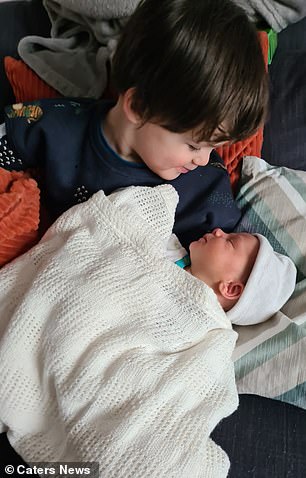 Amanda was told she could ‘never’ have children after going through menopause at age 11, but was later advised to go on hormone replacement therapy so she could carry a baby (left)

Amanda admitted that while she was pregnant with Oryn, she feared that she may not have a bond with her son, but added that her doubts disappeared when she noticed Oryn had his father’s looks but her personality.

The doting mother assumes that newborn Taylen, who looks just like Oryn did when he was born, will be exactly the same way.

Amanda even revealed that her two sons’ ‘scan photos’ were even exactly the same and she plans to read her children a book about egg donors in the future to explain their birth.

She said: ‘I’ve been comparing images of Oryn as a baby to Taylen now – and they look the exact same.

‘Their scan photos are even the same.

‘Oryn is too young to understand he is a twin but he adores his little brother.

‘We have books which explain egg donor babies which we read to them both so it isn’t a surprise in the future.’