A coalition of humanitarian groups is urging the federal government to permanently increase Australia’s foreign aid budget as more than $300 million in temporary measures put in place during the COVID-19 pandemic approach their expiry.

The foreign aid experts warned decades of development gains could be squandered unless the aid budget was boosted and called on the government to lock in extra funding in the mid-year economic and fiscal outlook next month. 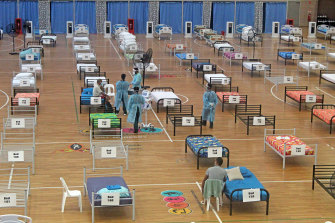 New polling shows 57 per cent of Australians support funding foreign aid to developing countries, compared to 52 per cent in 2019. In the poll of 1027 voters conducted by YouGov, the majority also said they supported increased Australian involvement to tackle issues exacerbated by the COVID-19 pandemic in these regions.

“The pandemic has increased the number of people in extreme poverty and weakened health systems globally,” she said. “The lives and livelihoods of our nearest neighbours are at risk and we should be doing everything within our power to help them.”

But a $304.7 million package for the Pacific is set to expire in 2021-22, including $67 million in funding for Papua New Guinea, which is still being ravaged by a COVID-19 outbreak.

A coalition of aid groups, called End COVID For All, is calling on the government to extend the Pacific response package to 2024-25, commit $50 million to address regional vaccine hesitancy and contribute an additional $420 million to purchase vaccines and other treatments for the region.

It also wants the government to share at least 20 million domestically produced vaccines through the international facility known as COVAX, and maintain a sovereign vaccine production capacity to support the region.

And amid the growing influence of China in the region, Mr Purcell said: “It will not be lost on the Australian government that this is also a competitive space.”

Australian National University economist Stephen Howes said it made no sense to be cutting foreign aid “given the unexpectedly prolonged nature of the COVID pandemic in our region”.

“Aid cuts should be avoided … the temporary and targeted measures could be extended, but it would be better for the government to admit that after years of cuts, now is the time to rebuild the aid program,” he said. “We are already one of the world’s least-generous aid donors.”

The government is still saying its permanent foreign aid budget is set at about $4 billion a year. For the first time in years, the government will index foreign aid from 2022-23, meaning it will rise with inflation.

A spokesperson for the Department of Foreign Affairs and Trade said the $304.7 million Pacific package was a “targeted and temporary measure and will conclude” on June 30, 2022.

“We note the ongoing impacts of the COVID-19 pandemic in the Pacific and continue to respond through our ongoing official development assistance program, which will deliver an estimated $1.44 billion to the Pacific in 2021-22,” the spokesperson said.

“Australia is working closely with the Papua New Guinea government to support its response to the current surge in COVID-19 cases and to accelerate vaccinations across the country.”