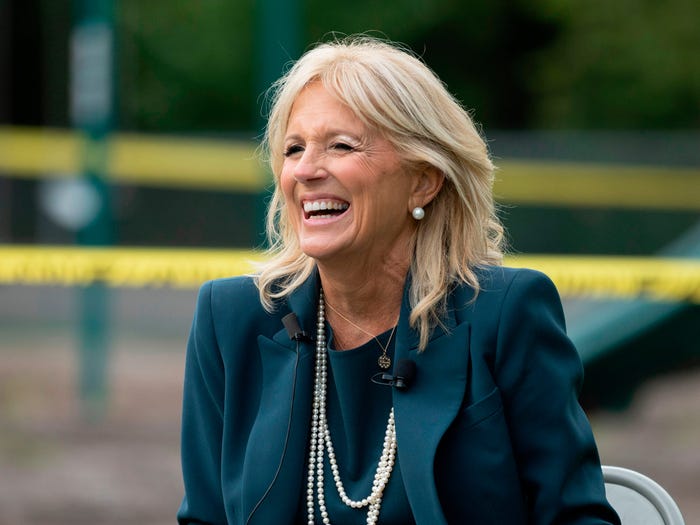 Dr. Gabriele Martorell begins each semester at Virginia Wesleyan University with an introduction to her students. The psychology professor lets students know that they can call her Dr. Martorell, professor, or even Gabi, but they can't call her Mrs. Martorell.

After years of seeing female PhD holders introduced using the titles Mrs. or Ms. instead of Dr., Martorell said it was time to educate her students about the issue.

"I think in most cases, students don't mean to be disrespectful or sexist. But, that's exactly why it should be addressed — they often have assumptions and biases of which they may be unaware," Martorell said.

Women who hold doctoral degrees have been reflecting on how they use their titles after a recent Wall Street Journal op-ed called on Dr. Jill Biden, who holds a PhD in education, to stop using her title.

The op-ed, written by a man without a doctorate degree, called on Biden to reserve the title "doctor" for MDs, saying she should "Forget the small thrill of being Dr. Jill, and settle for the larger thrill of living for the next four years in the best public housing in the world as First Lady Jill Biden."

The piece angered many mothers, who say it's critical for people to see women holding doctoral degrees and owning their professional accomplishments.

An example to future generations

Dr. Nicole Avena, a nutrition and health expert, said she wants to see Biden embrace her title of doctor so that more young girls recognize the academic achievements of women, particularly mothers.

"She is a public figure and can inspire women of younger generations to follow in her footsteps, and show that women can have both an academic career and family," she said.

Avena often talks to her own daughters, 12 and five, about how hard she worked on her doctorate.

"Girls need to be encouraged and shown that they can pursue whatever path in life that they choose," she said.

This can be especially important for girls of color, said Dr. Luz Claudio, professor of environmental medicine and public health at the Icahn School of Medicine at Mount Sinai.

"As a mother of a daughter, especially a Latina teen, it is important to me that she notices how important it is to have our achievements validated and recognized by the larger community," Claudio said.

She takes the same approach with her students, not out of a fixation on her title, but to show them that her accomplishments — and theirs — should be recognized.

"For my interns and students, especially those who are women of color, it is especially crucial for me to command respect and reclaim the title that I have rightfully earned with my hard work," she said. "It is not a matter of ego for me to be called doctor. It is a matter of modeling for my daughter and for my interns that this is possible for them."

Acknowledging the challenges of being a mom and doctor

Women who hold doctoral degrees say that their accomplishments need to be acknowledged, not just to inspire the next generation, but to recognize the work that they put into the degree. Yet too often, people don't want to validate their work, they say.

"As a woman, a Black woman, I often had the chance to chuckle at the audacity of those who minimize a journey that they themselves did not have the cognitive capacity or motivation to begin, let alone complete," said Dr. Ashley Elliott, a mental health consultant.

This is especially important for moms, who are often pushed out of academia, she said.

"I was told I had to choose between being a good mother or being a great clinician by childless advisors all while I watched the expectant fathers in my program be given parenting advice, gifts, and fly through their internship interviews," she said. "Never were they told to choose between their families and their careers. The world would never ask them to choose."

Although she isn't a medical doctor, Elliott said that her work — and Dr. Biden's — is just as important and should command the same respect.

"I may not be able to perform open heart surgery, provide medical care to children on an oncology unit, or write a prescription for a client in urgent care, but my doctorate is just as legitimate as the amazing MDs who can," she said.

Dr. Jenna Liphart Rhodes, a nurse with a PhD in education, said she feels the same.

"I completed my comprehensive exam and wrote my dissertation with a baby strapped to my body and while taking care of a preschooler," she said. "I led and inspired my children by example, by showing them true grit. I am a mother. I am a doctor."

The impact of the op-ed

Occasionally, Dr. Kerry Boyle, an acupuncturist, feels uncertain about using her title of "doctor." She never wants people to think she's a medical doctor, especially since she works in a health setting. But after reading the op-ed, which she said she sexist and condescending, Boyle plans to embrace her title, especially in front of her children.

"I have never shared my insecurities about using my title with [my kids], and after reading this op-ed, I don't think I ever will," she said.

Other mothers are hoping that the op-ed will change not just their personal discussions, but national discussions about sexism and even education.  Dr. Amanda Holdsworth holds a doctorate in education, just like Biden. She hopes that the spotlight on Dr. Biden will help more people look into her work and research, which has to do with keeping students enrolled at community colleges.

"This controversy has a positive: revisiting Dr. Biden's research and work in community college education couldn't come at a better time for our country," Holdsworth said.

Despite living with one of the most prominent politicians in the country, Biden has continued her work, showing a drive and passion that people should celebrate, said Dr. Carole Leiberman, a psychiatrist.

"Dr. Biden is obviously proud of her educational and career achievements and, for years, has continued to work and not rest on her laurels, despite her husband's increasing political stature," Leiberman said.

For many women with their own careers and credentials, having a mother who is a doctor as first lady — and watching her embrace her title — is exciting.

"On behalf of all the doctors who are mothers, sisters, wives, and friends, welcome to the White House Dr. Biden," Elliot said.

12/29/2020 lifestyle Comments Off on Moms with doctorates say it’s time to embrace their titles after Jill Biden op-ed
Recent Posts
We and our partners use cookies on this site to improve our service, perform analytics, personalize advertising, measure advertising performance, and remember website preferences.Ok