Before Meghan Markle was officially royal, she had a lifestyle blog and social media accounts just like everyone else. But ever since she’s taken on the role of being one of Britain’s most prominent voices, she’s scaled her activity on social media way back. With the exception of her picture that Kensington Palace shared on Twitter, she’s not on any social platforms anymore, and now she’s warning young people about the negative effects of living your life online.

Before speaking to volunteers for Live For Tomorrow, a mental health organization for young people, she reportedly said it was “freeing” to stop worrying about how many “likes” her posts would get. She also said removing herself from social media was important because “flattery and criticism run through the same filter.”

At today’s event, Meghan confessed, “Young people find it so difficult. You see photos on social media and you don’t know whether she’s born with it or maybe it’s a filter.” Preach!

Prince Harry also weighed in on how social media can impact someone’s mental health and said parents need to be more aware of how their kids are experiencing life online.

“Issues stemming from social media and gaming are a major problem for young people in the UK—and globally,” he said. “Fingers are often pointed at the parents but that’s not always fair as they too need to be educated about these things.”

Even though the world (+ me) might consider Meghan and Harry’s absence from social media a huge loss, if it benefits their mental health, that’s all that matters! 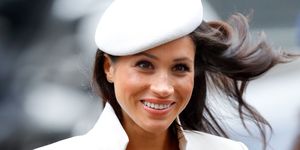