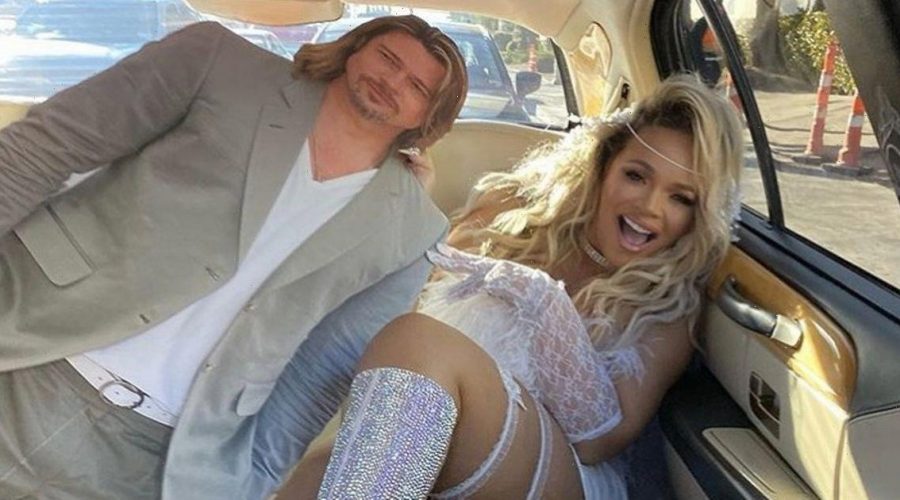 Many of us have little crushes on stars and may have even had a wall plastered with posters as a teen.

For some, however, the fantasy never ended and they ended up marrying their celeb crush – well, a cardboard cut-out, at least.

From YouTuber Trisha Paytas, a former UK Celebrity Big Brother contestant, tieing the knot with a fake Brad Pitt to K-pop super fan Oli London getting hitched to a cardboard version of their idol Jimin.

A woman also made the sudden decision one day that she was going to wed a cardboard cut-out or Twilight's leading man Edward Cullen, played by Robert Pattinson.

Dubbing it "true love" here are their romantic tales of when they knew they'd met 'the one'.

Brad Pitt, I do

Trisha Paytas tied the knot to the piece of cardboard in November 2019.

The 33-year-old, who identifies as non-binary, has documented their obsession with Hollywood legend Brad Pitt for years.

So, their fanbase was not entirely shocked when they shared a snap on Instagram announcing the YouTuber had just wed a fake Bitt in Las Vegas.

In the photo, they posed in the back of a car with a cardboard cutout of Brad Pitt which they married in Vegas earlier this month.

On November 5, the vlogger uploaded a video to their 4.9million subscribers titled "My Official Wedding Video".

On the big day, Trisha donned a white mini skirt that could barely contain their rear.

Featuring white fluff around the rim, the reality star paired it with a matching crop top.

Trisha added glamour to the wedding day outfit but opted for a pair of heeled boots covered in what appeared to be rhinestones.

Cosmetic surgery lover and mega K-pop super fan Oli London left followers gobsmacked after taking their obsession for Jimin to the next level.

They also tied the knot to a cardboard cut-out of the star in Las Vegas.

The big day commenced in January 2020 and saw Oli say "I do" in front of an Elvis Presley impersonator.

It went viral at the time as Oli gushed they had "finally married" their favourite person on the planet.

Speaking to MailOnline at the time, they said: "It was such an emotional ceremony. I felt very emotional.

"Jimin is my idol. I've spent a lot of money on surgery to look like him, and now I've actually married him."

In the video, as it comes to signing the paperwork Oli says to their new speechless husband: "I guess I'll sign for you, Jimin."

Every Twilight lover either fangirled over Edward Cullen (played by Robert Pattison) or Jacob Black (portrayed by Taylor Lautner).

Nonetheless, there is always one who takes the fantasy to the next level.

For this franchise, it was Lauren Adkins who on one random day at 25-years-old said she decided to marry a cardboard cutout of the teenage vampire.

Edward, who is forever stuck in the body of a 17-year-old but is actually a 100-year-old bloodsucker, of course, caught Lauren's eye as she walked past a record shop.

Lauren said after years of longing for the romance she decided the life-size cutout was what she had been looking for all along.

Speaking to The Mirror in September 2014, she said: "We got hitched in Las Vegas last year and I’m sure we’re happier than most newlyweds.

"People might think I’m crazy but my flat-pack R-Patz is the closest I’ll get to the real thing and he’s the one for me.

"For as long as I can remember I’ve been ­obsessed with romantic fairytale endings.

"When I was a child, I watched the Disney ­versions of Snow White and The Seven Dwarfs and Cinderella until the tapes wore out."

Lauren told the publication the day cost her £2,000.

"We had our honeymoon in LA and I wanted us to climb up to the Hollywood sign together.

"I had to carry him, and we had to do it at night because he can’t be in the sun.

"But everyone makes sacrifices for the man they love, right?"