Daniel Lismore is a calm man; not easily moved to anger. But when he was verbally abused by three men outside a club in London's Mayfair, then spat on – not once, but three times – he decided enough was enough.

The men noticed Lismore because, well, he's hard to miss. Standing 193cm in his socks he was wearing a blonde beehive wig and an Issey Miyake dress with "massive balloon breasts". He looked like an easy target, perhaps. But when the British style icon was punched in the face he fought back. "I never flip unless someone physically hurts me," he says evenly. "When he hit me, I beat the living daylights out of him and his friends." The Miyake dress, he notes with the satisfaction of a true fashionista, acted as a kind of armour: protecting him from all but the most severe blows. 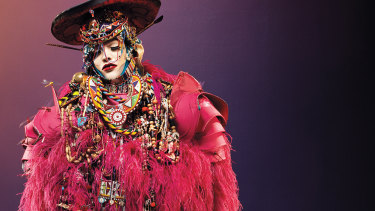 “England’s most eccentric dresser” Daniel Lismore.Credit:Daniel Lismore: Be Yourself, Everyone Else is Already Taken. Photography, Colin Douglas Gray

It wasn't the first time Lismore had been abused in the street and it wouldn't be the last. The man dubbed "England's most eccentric dresser" by the US edition of Vogue, knows that his decision to "live as art" – to dress each day in a maximalist assemblage of fabric, chain mail and millinery decorated with a constellation of homemade accessories – has consequences, not all of them positive. "I've been abused and assaulted many times," he says. "They're just ignorant people: people who are angry or unhappy with themselves."

Most of his interactions with the public – either face-to-face or on Instagram where he has 78,000 followers – are overwhelmingly positive. He claims to be largely impervious to insults in any case. "I'll go anywhere in the world, I don't care," he says. "You can't make assumptions about an area or a city. I was in Atlanta and people told me not to go to a certain club. I went with a huge bowl on my head and had the best night ever. The world isn't full of hateful people – it's just a few who ruin it for others."

In a world of grey conformity, Lismore is a true original. As he strides across the foyer of a hotel in London's Soho wearing a full face of makeup, a chain-mail headdress, a floor-length black skirt and an embroidered Alexander McQueen coat that's as plump as a winter duvet, even seen-it-all hipsters stare in slack-jawed awe. 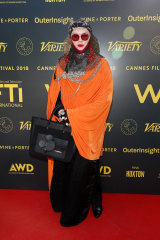 Daniel Lismore: “I don’t own a tracksuit or a pair of jeans and the only T-shirts I have are punk ones from the 1970s,”Credit:Dave Benett/Getty Images

He extends me a soft hand decorated with exotic rings and jewels, apologises for being late and folds himself onto a sofa. A waiter approaches – tentatively – and he orders a diet Coke and a pot of Earl Grey tea with cold milk. The smell of his homemade perfume is intoxicating and for a while I'm mesmerised by the light bouncing off all the brooches, beads and brocade.

I ask him about the chain mail that features in most of his outfits. He usually wears steel mesh, he says, but today he's swapped it for aluminium. The steel chainmail is heavy and is taking a toll on his neck and back. "If you don't wear it for a few days you can get whiplash when you do," he explains without smiling.

He is not a drag queen he explains. Nor is he a performance artist like Leigh Bowery, the flamboyant Australian who cut a swathe through London's underground art and club scenes in the 1980s. He gets compared to Bowery all the time – Boy George even asked him to play the Australian provocateur in the stage musical Taboo – but "he [Bowery] really wasn't as much of an inspiration as people think."

Like many people in the fashion world he is coy about his age, but admits to 35 after some persuasion. Despite his outrageous appearance he is quite shy and admits his costumes are a kind of force field that protect him from the world. "In some ways they're like my superpower and in other ways it's a bit like an ostrich sticking their head in the sand," he says. "They shield me in a way. They help me live my life the way I want to." 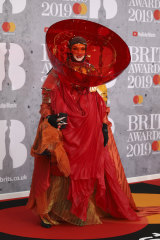 He grew up in a village called Fillongley in Warwickshire in a house built in 1612. It belonged to his paternal grandparents who he lived with following the death of his father. His grandparents – "I call them mum and dad" – were antique dealers and he was surrounded by beautiful things. Obsessed with Star Trek from an early age, his play combined models of Spock and James T. Kirk with a figurine of Cardinal Wolsey wearing red robes. "I had the most amazing childhood," he says. "I was completely surrounded by love and I had everything I wanted."

Things became more complicated in his teens. He started borrowing his mother's make up, dying his hair and wearing eight-inch platform heels. "I didn't care – I just wanted to dress the way I wanted to dress," he recalls. His mother was entirely supportive, but he began to be bullied at school. "I used to lock myself in the art classroom and refused to go to other lessons. In those days you couldn't talk about being gay in a Catholic school, so the teachers knew why I was being bullied but weren't allowed to mention it."

Art was his escape. He was a good sculptor and one of his projects was a model of all his favourite celebrities on a red carpet surrounded by paparazzi. "I think that's when I discovered Andy Warhol," he says. "I know it's a cliché for an artist to say they love Warhol, but I do. I think he's fascinating and I understand his fascination with fame because I was thrown into that world."

At 15 his androgynous features and waist-length hair caught the attention of a model agency. Two years later he was catapulted to London to be photographed by the likes of David LaChapelle and Ellen Von Unwerth. It was exciting, but he found the fashion world surprisingly conservative. "I used to wear eyeliner and ripped jeans with my crotch hanging out to castings and they said 'you can't do that'. Mum came to the rescue. She loves Oscar Wilde and dressed me in a dandy look which was more acceptable."

He made the decision to live as an art work at the age of 19. Since then he has walked the streets of London, or any city he finds himself in, as a kind of living sculpture. His outfits are pulled together from a collection of more than 7000 items – everything from thrift shop finds to catwalk pieces. When something breaks he turns it into something new, a brooch or a set of earrings.

The ensembles are not reserved for special events. He wears them to the supermarket as well as movie premieres and fashion shows. Now and then he'll dress down, but he never leaves the house without sporting a 'look'. "I don't own a tracksuit or a pair of jeans and the only T-shirts I have are punk ones from the 1970s," he says.

In some ways [outfits are] like my superpower and in other ways it’s a bit like an ostrich sticking their head in the sand.

His website describes him as an artist, designer, celebrity stylist, writer and campaigner. He was a fixture at London's most hedonistic clubs in the noughties and worked as a photographer for several years. As the creative director of the fashion label Sorapol from 2012 to 2016, he dressed the likes of Kylie Minogue, Azealia Banks and Nicki Minaj. More recently, he has designed the costumes for English National Opera's 2019 production of Mask of Orpheus, an eye-popping staging featuring what one critic called "fuchsia pink Teletubbies". He describes Be Yourself, a candid TED Talk he gave in Vancouver last year, as the most nerve-wracking thing he's ever done.

The people he calls friends are a who's who of the arts and entertainment world. They range from club identities like Philip Salon and Jodie Harsh to Stephen Fry, Debbie Harry and Edward Enninful, the editor-in-chief of British Vogue. He talks fondly of fallen comrades like the magazine editor Isabella Blow and club promoter and pop singer Steve Strange.

Ask him to describe a typical day and he sighs. "I don't have them." The day before our meeting he was at the Queen's House in Greenwich posing with a portrait of Queen Elizabeth I to promote an LGBT event called Fierce Queens. In the evening he attended the premiere of Love Infinity, a film about London's artists by Crouching Tiger, Hidden Dragon art director Tim Yip, in which he has a lead role.

If you think his life seems rather frivolous it's worth pointing out his passionate and longstanding advocacy for action on climate change. As an ambassador of the charity Cool Earth – its patron, Vivienne Westwood is a close friend – he visited the House of Lords wearing the blonde beehive wig accompanied by Westwood, Jerry Hall and Pamela Anderson.

"If you're given a platform you might as well use it to do some good," he says. "It really annoys me when celebrities or people who are influential don't help others. [Climate change] is real. It's so real. People who deny it are complete morons, idiots."

His life may be glamorous, but it is no fairytale, he insists. He has been homeless, broke and at one point suicidal. "I really struggled for years," he says. "The fashion industry never wants to pay anyone. No one wants to pay you for your time, no one wants to pay to photograph you.

When he stopped modelling he put on weight and became self-conscious about his body. "No-one's seen my legs for years," he says indicating the floor-length skirt.

Age has given him a much healthier perspective. "I just think life is so important and we're so fortunate to be here," he says. "I could dwell on my past and be really miserable or just go out and live my life. Ultimately, I've just kept working at it and I never gave up. That was the key – never giving up."

Daniel Lismore presents a keynote at the Sherman Centre for Culture and Ideas (SCCI) Fashion Hub on March 20.

02/13/2020 lifestyle Comments Off on Meet the man who lives his life as a work of art
Recent Posts
We and our partners use cookies on this site to improve our service, perform analytics, personalize advertising, measure advertising performance, and remember website preferences.Ok