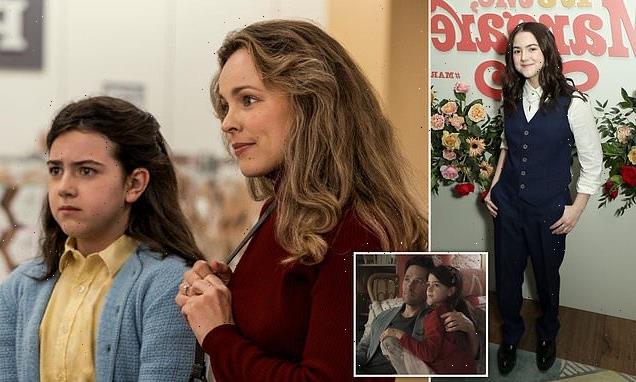 Hollywood’s new teen queen? FEMAIL reveals the 14-year-old actress set to break into the big time with title role in hotly-anticipated movie Are You There God? It’s Me, Margaret – having already conquered Marvel Universe with the help of her actor parents

She landed the coveted role of iconic character Margaret Simon in the upcoming movie, Are You There God? It’s Me, Margaret – a part that is sure to catapult Abby Ryder Fortson’s career to the next level.

However, the young actress may already be a familiar face to some after appearing in hit Marvel movies during her blossoming career, with the 14-year-old’s star set to shine brighter than ever with the release of the highly-anticipated adaptation.

In fact, Abby was named one of The Hollywood Reporter’s ‘Top 30 Stars Under the Age of 18,’ cementing her status as one to watch in coming years.

As the daughter of actors John Fortson and Christie Lynn Smith, it seems safe to say the apple hasn’t fallen far from the tree as she begins to forge her own path in Hollywood.

However, unlike the industry’s now-infamous ‘nepo babies’, Abby looks set to not only match her parents’ modest on-screen successes – but eclipse them altogether. 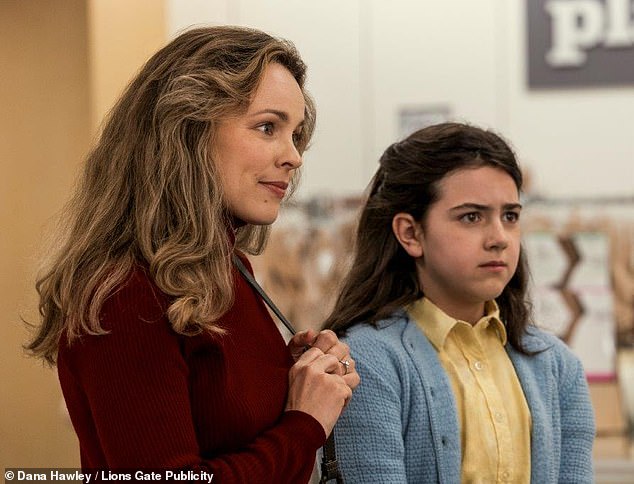 Abby Ryder Fortson stars as the iconic character, Margaret Simon in the upcoming film, Are You There God? It’s Me, Margaret (pictured with co-star Rachel McAdams 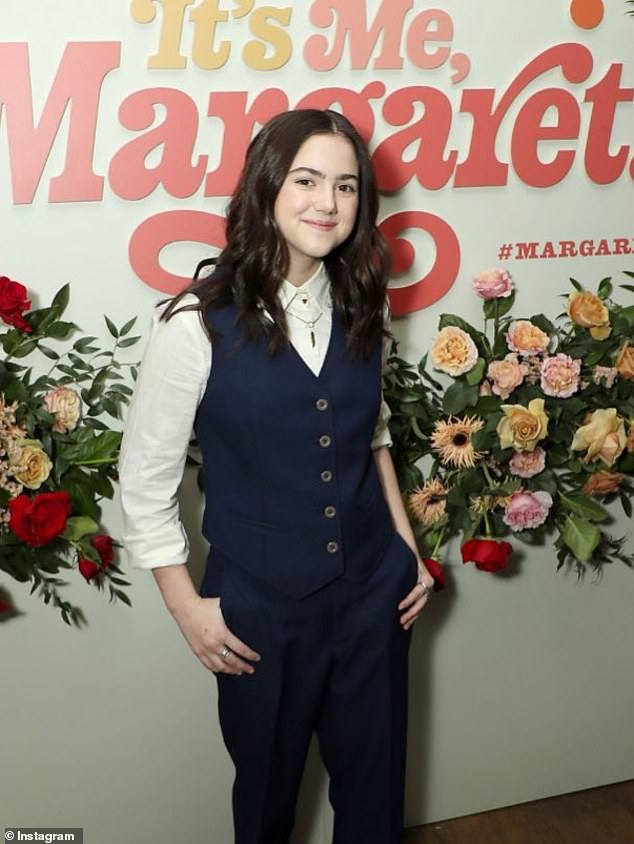 Having already worked with Hollywood stars such as Paul Rudd and Evangeline Lily, the young starlet will be next seen sharing the screen with heavyweights Kathy Bates and Rachel McAdams in her new flick based on Judy Blume’s famous novel.

The beloved book, which recently celebrated its 50th anniversary, was originally published in 1970 and soon became a breakthrough bestseller.

The story follows sixth-grader Margaret Simon as she and her friends tackle the challenges of buying first bras, first periods, and other trials and tribulations associated with a young person coming of age.

Following the release of the adaptation in April, it’s expected the story will once again impact the lives of a whole new generation, with Abby becoming the official face of the adored character.

A rising star is born: As the first child of two working actors, Abby entered the industry at a young age 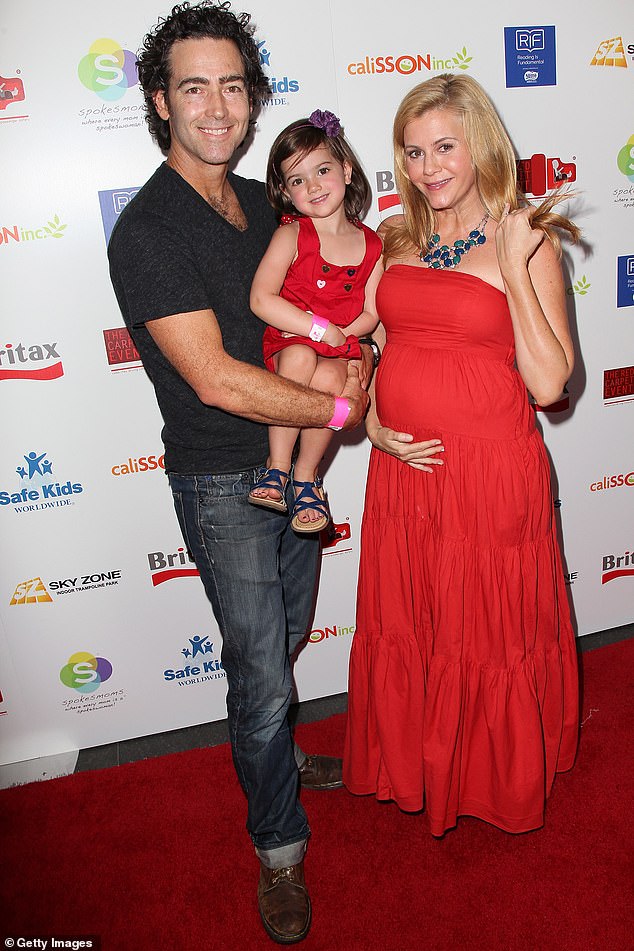 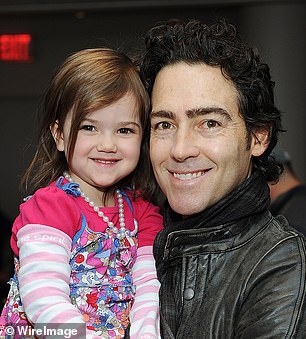 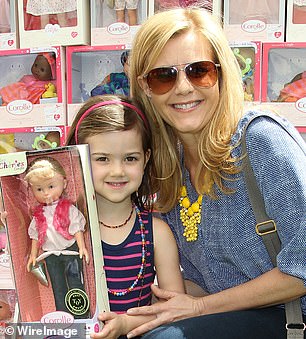 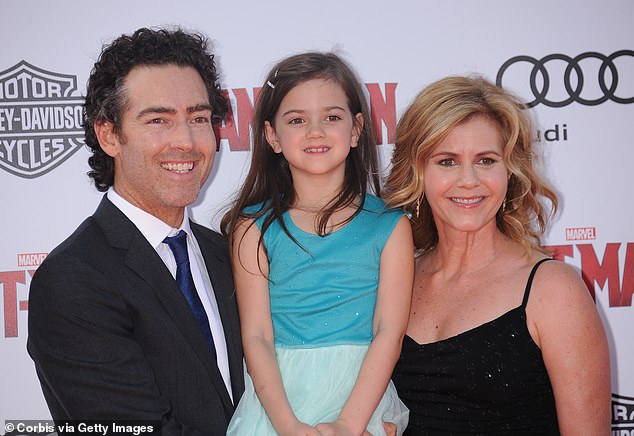 Abby has also worked with her parents in the short film, Rated, which was written and directed by her father

Abby has been making headlines ever since she was born in Burbank, California – with the announcement running in publications such as People magazine.

Her father, award-winning actor, writer and director, John Fortson, has guest-starred in ER, 7th Heaven, Day of Our Lives and worked on his own projects.

Abby first booked a commercial when she turned four and the actress soon moved on to a recurring role on Amazon Prime series, Transparent.

She also bagged a part in Steven Spielberg-produced ABC series, The Whispers,  before landing a role on HBO’s Togetherness.

Thanks to more appearances in a string of movies and a few voice-acting gigs, Entertainment Weekly soon named Abby as ‘One of TV’s Most Valuable Kids.’

The title also claimed she was ‘one of the best actors under 12’ and ‘one of the top child actors to watch’ thanks to her performances.

A Marvel-ous moment: The young actor won hearts across the globe thanks to her performance in two Marvel movies 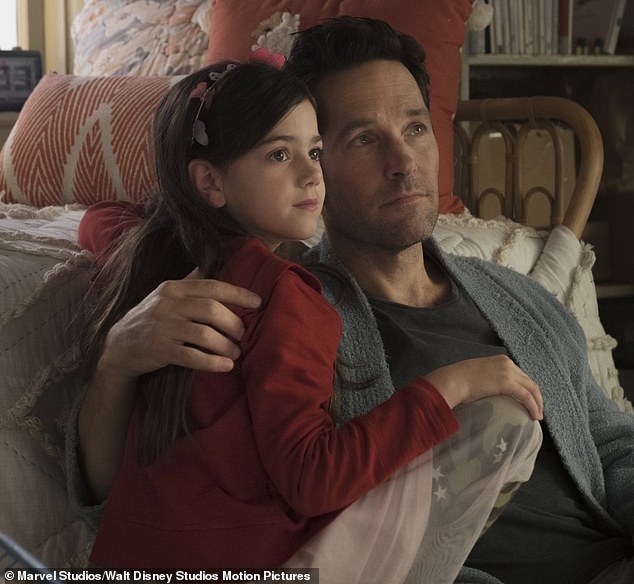 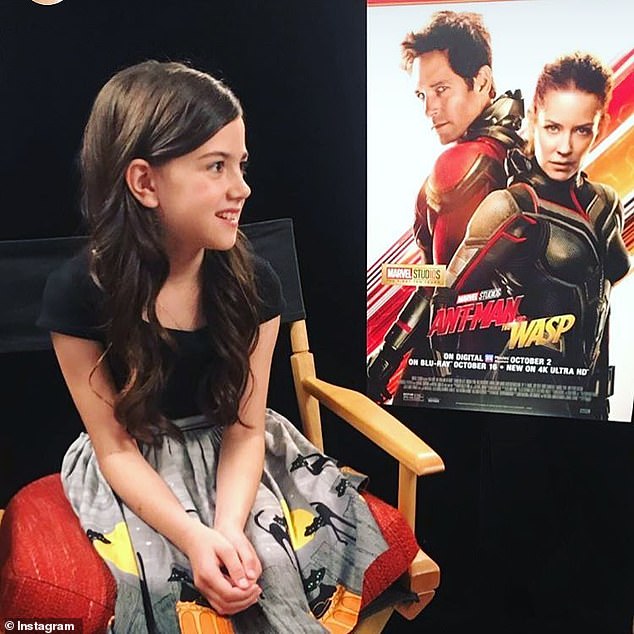 The starlet reprised her role as Rudd’s characters daughter, Cassie Lang, in the 2018 sequel, Ant-Man And The Wasp 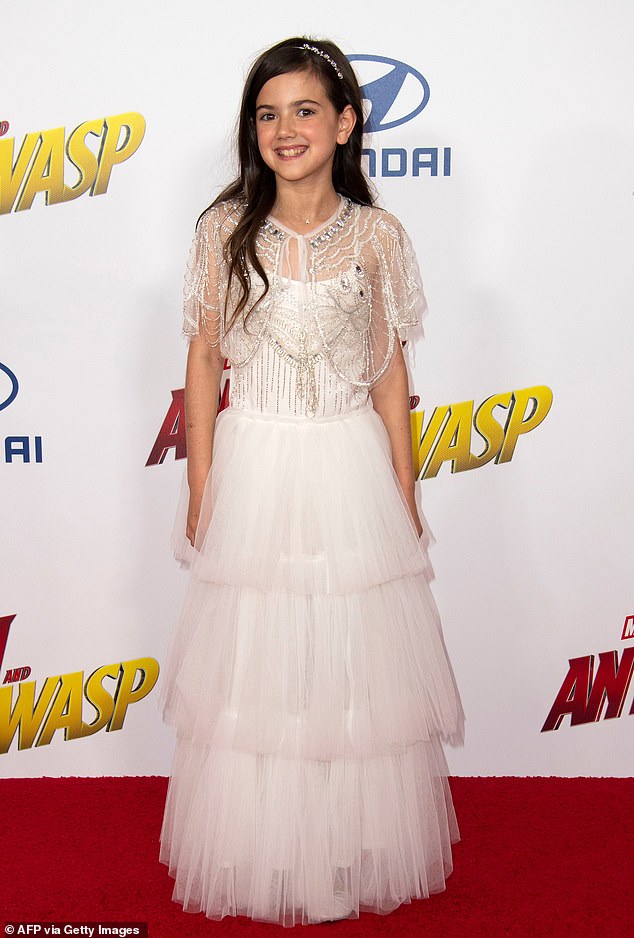 Thanks to her part in the hit films, Abby was named one of The Hollywood Reporter’s ‘Top 30 Stars Under the Age of 18’

Abby has been best known for her role as Cassie Lang in Marvel’s 2015 blockbuster film Ant-Man and its 2018 sequel, Ant-Man And The Wasp.

Naturally, the star has also worked with her parents in the short film, Rated, which was written and directed by her father.

By 2019, Abby was then named one of The Hollywood Reporter’s ‘Top 30 Stars Under the Age of 18’ alongside the likes of Young Sheldon’s Iain Armitage and the cast of Stranger Things.

She also recently re-teamed with famed director Mark Romanek, starring in the pilot episode of the Amazon Prime series, Tales From The Loop. 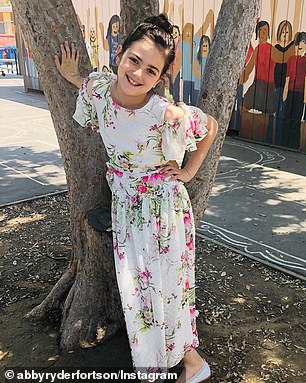 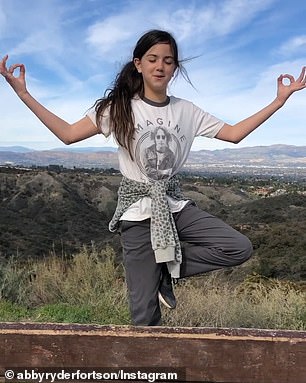 Despite her burgeoning career, the young star still gets to take time out from work to focus on her interests such as school and activism 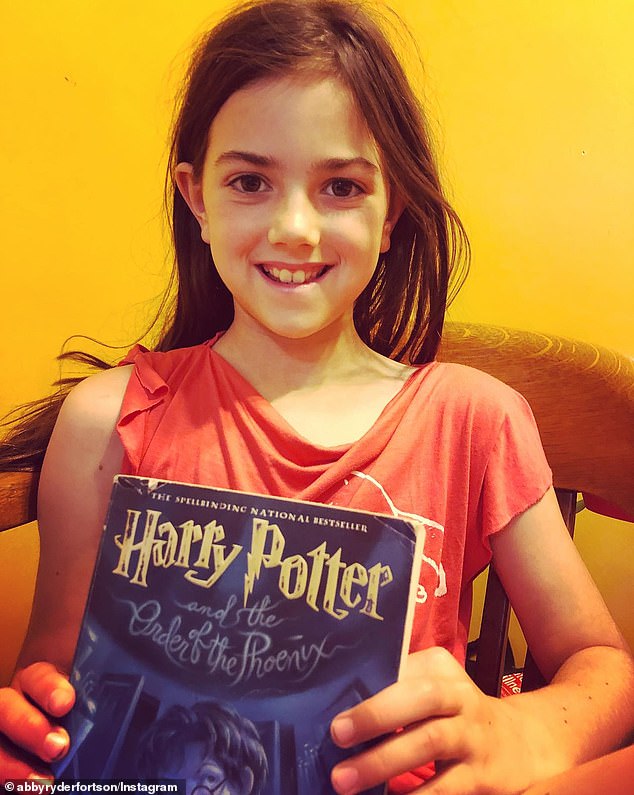 As highlighted to her 51,000 Instagram followers, Abby is a keen reader 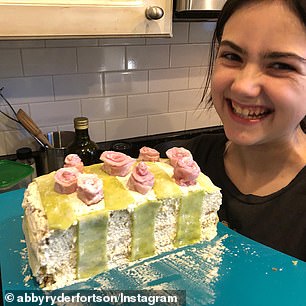 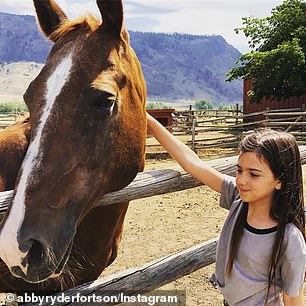 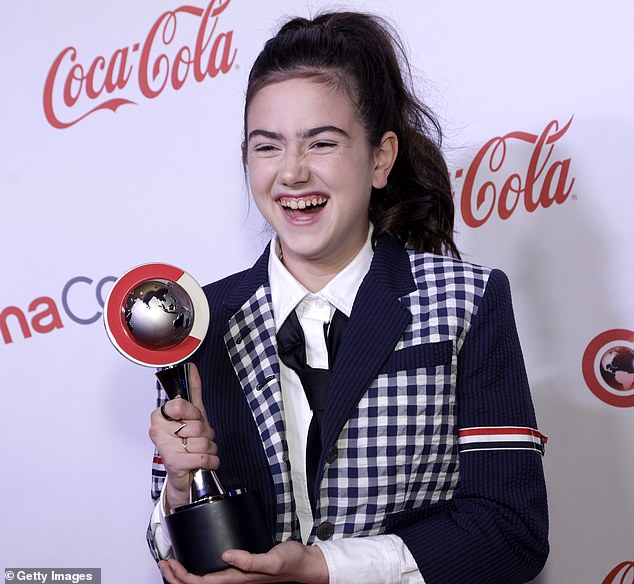 Her performance earned widespread critical praise, with Matt Fagerholm of Roger Ebert declaring: ‘Abby Ryder Fortson cements her status as one of the most promising actors of her generation.’

The young actor already has big dreams for her career path after citing actress and production mogul, Reese Witherspoon, as her idol.

Meanwhile, she also expressed interest in helping to adapt a project of her own after revealing that she would love to star in a movie based on The Secrets Of The Immortal Nicholas Flamel series.

Despite her burgeoning career, the young star still gets to take time out from work to focus on her hobbies, such as reading, baking and surfing.

Sharing snippets from her private life on an official Instagram page run by her parents, her 51,000 followers also get an insight into her activism for animal rights and environmental issues.

Time to shine: The starlet is expected to make waves as she takes on bringing the character created by Judy Blume to life 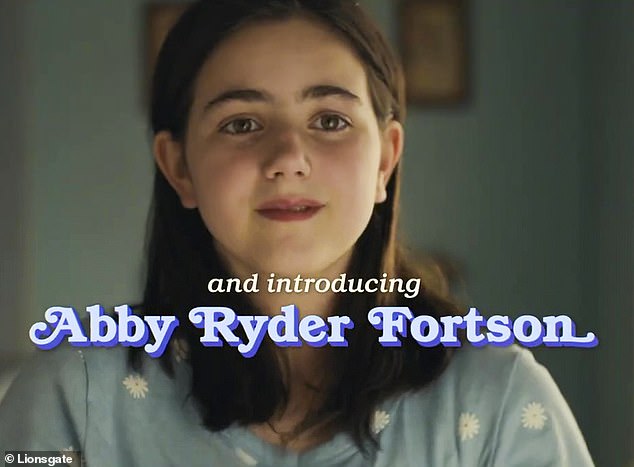 The coming-of-age adaptation, based on the beloved book by Judy Blume, will see Abby’s star rise to new heights 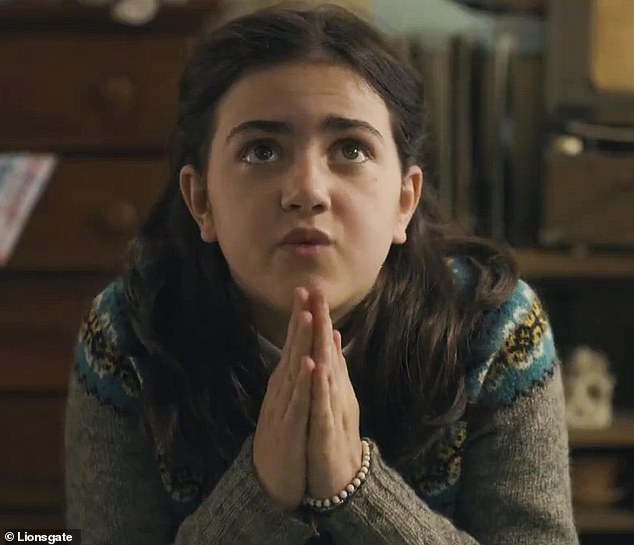 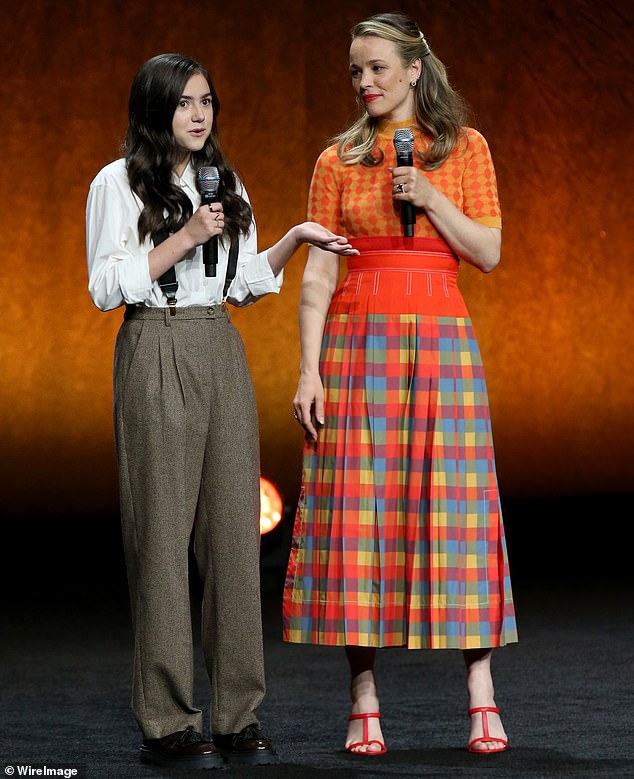 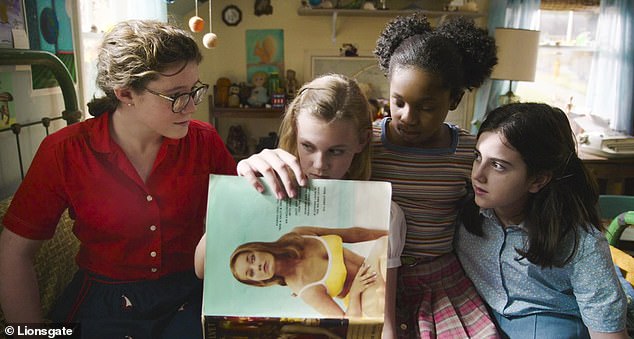 Are You There God? It’s Me, Margaret will be released this spring, hitting theaters on April 28

Following the announcement that she would be starring in It’s Me, Margaret, Abby won the award for Rising Star of 2022 at last year’s CinemaCon.

If the first official trailer of her upcoming film is anything to go by, the young star is sure to win over audiences in the Kelly Fremon Craig-directed project, which was made with the blessing of 84-year-old Blume.

Are You There God? It’s Me, Margaret was selected in 1970 by The New York Times as the Outstanding Book of the Year.

It is the second of Judy’s novels to be adapted for the big screen after her son, Lawrence Blume, directed the 2012 film, Tiger Eyes.

Are You There God? It’s Me, Margaret will be released this spring, hitting theaters on April 28.

01/18/2023 lifestyle Comments Off on Meet the It's Me, Margaret star set to outshine her A-list castmates
Recent Posts