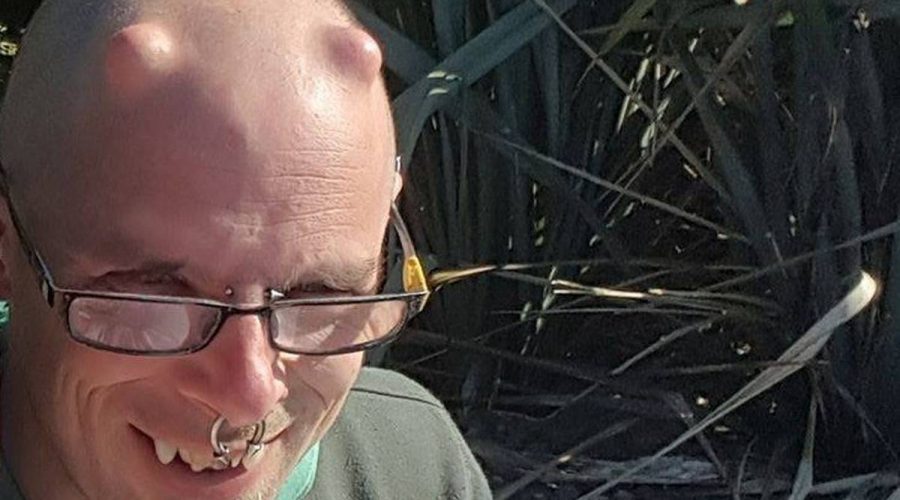 Westport people may be familiar with the face of Drak, the town’s resident “vampire”, complete with implanted horns and fangs, but few may know his story.

Born Andrew John Brown, “Drak”, as he likes to be known, changed his name by deed poll when he was 21 to Vlad Dracula-Lowe.

The 46-year-old was born and raised in Wellington. He was brought up in a “broken” home, after his parents parted ways when he was still young.

“My father took me to a Christian church every Sunday. I always knew I was different, especially when the priest would talk about a man with horns who was wanting to take over the world. As a 5-year-old, I decided I wanted horns.”

When Drak informed his mother he had changed his name and at the same time explained that he was a vampire, she was not really surprised.

Drak left Wellington for a two-and-a-half-year stint in Auckland. “It was two and a-half years too long.” He then moved to Christchurch for 15 years.

He and wife Sandra Lowe moved to Westport after the Christchurch earthquakes. They have been on the Coast ever since, apart from 18 months in Dunedin, after Cyclone Fehi destroyed everything they owned in Westport.

It was not until Drak turned 31 that he had silicone implants inserted in his head for horns. He already had numerous tattoos and body piercings.

They were implanted by a specialist American surgeon who travelled the world doing unusual surgeries. Drak’s was performed in New Zealand.

Drak said he still attracted some stares, although he said people around Westport seemed to have grown familiar with his looks.

“It just seems to be people from out of town who stare now.”

Sometimes, people stopped and asked him about his appearance.

“I prefer that to people staring,” he said.

And what does being a vampire involve? Drak said while he has drunk a small amount of human blood it is not part of his usual diet. He describes himself as a non-Christian. He fills in forms requesting his religion, as “Vampiric”.

Full moons do not affect him but he does try to stay out of the sun.

“I’m usually the only one at the beach wearing a hoodie.”

Though technically vampires are meant to be very difficult to kill, Drak said he had already cheated death four times. He was knocked off his bike when living in Wellington and had to be resuscitated three times. After another incident, he woke to find he had just been resuscitated in an ambulance. At 46, he says he is not immune to pain, either.

He has always been interested in art, which stemmed from working as a teenager as a car spray painter and then working in the industry for 15 years. He describes himself as an artist specialising in automotive paints using an airbrush.

He paints a variety of artworks, from the more macabre through to scenery.

Drak is also a stay-at-home dad to two sons aged 12 and 14, as his wife works full-time. He also has a 19-year-old daughter who lives in Christchurch.

“I’m really pretty normal, although I did sleep in a coffin for 13 years until I met my wife. She says that for someone who use to slept in a coffin, I sure take up a lot of space in a king-sized bed!

“The kids sometimes get comments but I’ve been around the school dropping off and picking up so people are mostly used to me.”

Both boys also associate themselves as vampires.

Drak says that a lot of what people know about vampires comes from movies and it isn’t correct.

“I can’t vanish or turn into a bat or anything.”

He also doesn’t belong to any vampire group or organisation, although he does know other vampires living in New Zealand and overseas.