The mass redundancy of women on maternity leave from La Trobe University has triggered a human rights complaint and a letter from 145 staff and affiliates demanding an independent investigation.

Eleven out of 12 mothers on leave from one department were offered redundancies according to staff. They say this means 90 per cent of those on maternity leave were not "matched" with roles during restructuring compared with only 13 per cent of other staff.

A complaint has been made to the Victorian Equal Opportunity and Human Rights Commission and in a statement the mothers said they felt they had been subject to "gender bias". 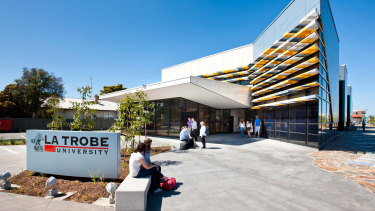 Academics at La Trobe University say bias may have caused a large number of women on maternity leave to be offered redundancies.

"To treat women staff members like this who are doing the substantial work of caring for tiny babies as well as trying to maintain a professional or academic career during a pandemic and pretend that bias plays no role whatsoever is an insult to our intelligence," the statement said.

"HR have indicated that these figures are correct, but refuse to consider the possibility that this wild discrepancy could be a result of conscious or unconscious bias or discrimination."

A La Trobe University spokeswoman said the university "strongly denied" staff on parental leave were targeted. She said nine of 143 positions made redundant during the process were on maternity leave.

'To treat women staff members like this … and pretend that bias plays no role whatsoever is an insult to our intelligence.'

"We are working to ensure our structures, our processes and our policies are not indirectly or inadvertently discriminating against any particular groups," she said in a statement.

In the letter to Vice-Chancellor Professor John Dewar, academics called for the appointment of an independent investigator to examine if "conscious or unconscious bias is at play here" and demanded he work with the Australian Human Rights Commission to select the investigator.

Advocates for the mothers, who do not wish to be identified while redundancies are finalised, say the commission accepted the complaint more than a month ago and is examining the "disproportionate" number of mothers who were not given roles during restructuring.

The staff letter said "women and people with caring responsibilities and other marginalised staff make a huge contribution to this university. They must be treated fairly."

Anthony O’Donnell, an academic who worked in the La Trobe Law School for 14 years and is now an adjunct senior lecturer, said he signed the letter due to the disparate impact on "women exercising their right to parental leave".

"Talking to these mums on parental leave during a time of pandemic and restructuring, they were justifiably distressed and uncertain as to their future," he said.

“I’m hoping that management will review the way it manages workplace change, and its gendered impacts."

The fact some mothers were given the choice between redundancy or competing with their colleagues for a small number of jobs, possibly at demoted status, in a "spill and fill" process, was "brutal" according to their advocates.

A spokesman for the Victorian Equal Opportunity and Human Rights Commission said it does not comment on current matters.

He said the commission had received a range of employment-related complaints during the pandemic, particularly concerning access to flexible work arrangements.

Our Morning Edition newsletter is a curated guide to the most important and interesting stories, analysis and insights. Sign up here.