This is a powerful piece of theatre with a message. It focuses on Australia's Indigenous people but reaches out to the community as a whole. 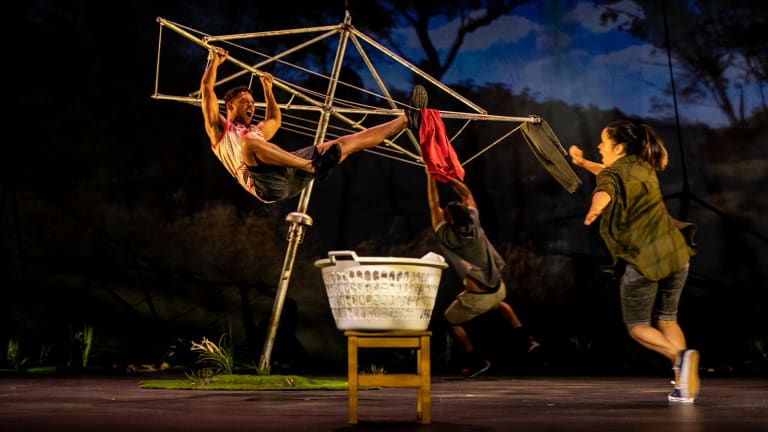 Man With The Iron Neck has plenty of lighter moments.Credit:Victor Frankowski

Its theme is suicide, specifically the death of a young man who seems to have everything going for him, except for demons in his mind that link back to colonial killings and the suggested suicide of his father. He sees himself as a failure.

It is a tragic story yet the performance offers more laughter than tears in its finely drawn portrayal of an Aboriginal mother and – on the brink of adulthood – her twin son and daughter, and her daughter's boyfriend.

The playful relationship of the younger generation is energetic and amusing. Even at the end, there is the consolation of happy memories embracing the need to move on.

Ursula Yovich, who also plays the mother, wrote the words. They are colloquial and concise, providing the main driver of the piece – as distinct from this physical theatre company's most recent Sydney offering last year, which was all movement.

Legs on the Wall was founded as a movement-based group, but has varied in displaying the balance of its talents. Here the skills of flying through the air at the end of a rope are offered at only a few key points – most dramatically at the end – though the acrobatic ability of the younger performers makes a huge contribution to the opening scenes.

Happily, Kyle Shilling, Tibian Wyles and Caleena Sansbury can also act convincingly, and lead the audience vividly through their characters' hopes and fears.

Significantly, the performance began not only with the customary welcome to country, but a list of young Aboriginal girls, a couple not even teenagers, who have committed suicide recently. Everyone in the audience was given a handsomely designed pamphlet to read with information and contacts for help if it was needed.

This production not only has a big artistic team behind it: Josh Bond, who is responsible for the original concept as well as co-directing the show with Gavin Robins, co-composers Iain Grandage and Steve Francis, set designer Joey Ruigrok and video designer Sam James amongst others.

It also has cultural support that has helped hone its validity. Though it is in Sydney for too short a season, it has touring dates including the Adelaide Festival in March, and deserves a wide audience.

01/25/2019 lifestyle Comments Off on Man With The Iron Neck review: Powerful work’s impact extends past the stage
Recent Posts
We and our partners use cookies on this site to improve our service, perform analytics, personalize advertising, measure advertising performance, and remember website preferences.Ok