It was love at first sight when Tanya saw Annie across a crowded jail. 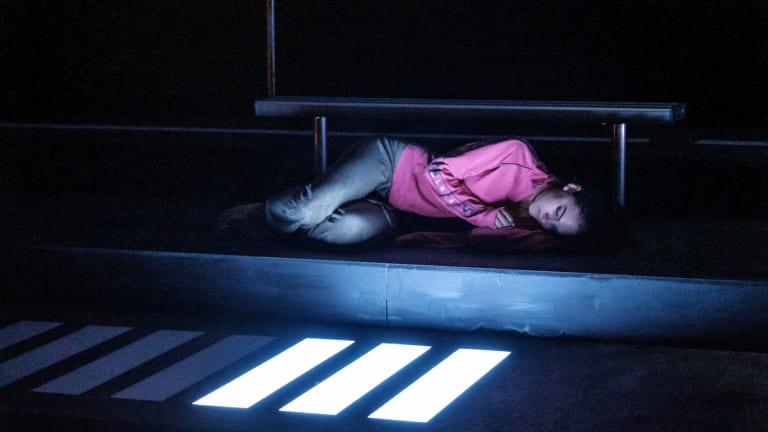 "You were wasted and looked like shit, in the clink for a six-month stint, your hair all lank, you had a split lip," Tanya recalls.

This is a raw, ferocious love between damaged souls, young women at the bottom of the social scrapheap. Theirs is a world of drugs, crime, jail cells and grim rooming houses.

From the opening lines, Patricia Cornelius' taut and gripping play grabs you by the throat and never lets go.

Tanya is a 19-year-old junkie prostitute, tiny as a sparrow. Annie is her butch protector with the pulsing energy of a prizefighter. Neither is easy to like. And that's the point.

Annie is terrified of being alone. So when Tanya is briefly returned to jail, Lorenzo arrives on the scene.

He's in love with Annie too. Or at least the drugs her whoring provides.

There's a confronting honesty and black humour as Annie, making out with Lorenzo, tells him nothing will ever come between her and Tanya.

Meanwhile Annie, released from jail, is surprisingly accommodating of Lorenzo. The three form a bizarre love triangle, and it is far from predictable.

The dynamics shift constantly between Tanya and Lorenzo as they become allies, enemies and in one brief moment as Annie sits between them, almost parental in their regard for the woman who is the pivot of their brutal lives.

Amid the vicious cycle of abuse, they expect little of life. Their dreams, such as they are, are touchingly modest – a holiday, a dog – but barely articulated.

Annie fleetingly longs for more – to go somewhere she hasn't been, see something different, but hasn't the words to express where or what.

Excited at having relieved a John of his credit cards, Annie reckons that "for a couple of hours we can live". The two women ponder a spending spree, but struggle to think of what to buy beyond shampoo and new trackie-daks.

The dialogue is delivered in short, sharp blasts, as the characters ricochet off each other.

There are strong performances, played without sentimentality. Rose Riley as Annie reveals vulnerability beneath her brittle surface.

Anna Samson as Tanya is as wired and fiercely protective as a she-wolf. Her loyalty is tested but never in doubt. The abused and abusive pair are survivors.

Hoa Xuande is capricious and callous as the manipulative Lorenzo, though could use a tough more menace.

Nate Edmonson's sound design injects moments of portentous yet lyrical beauty. And concluding with an arrangement of REM's hauntingly dark The One I Love strikes a perfect note.

Cornelius' play won the 2004 Wal Cherry Award and the 2006 Awgie Award. More than a decade on it retains its urgency and relevance.

The Melbourne playwright has long made the marginalised the focus of her work. They're peopled, as she has said, with characters you would cross the street to avoid.

Her work is stark and confronting but too rarely seen on our mainstages.

She writes with a clear-eyed, non-judgmental regard for society's dregs. It is all too easy to find compassion for the so-called "deserving". Cornelius' skill is to make us care for those seemingly beyond the pale.

11/22/2018 lifestyle Comments Off on Love review: Cornelius delivers raw tale of damaged souls from beyond the pale
Recent Posts