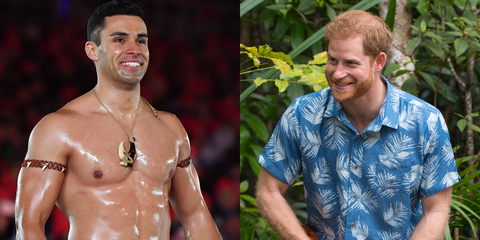 On Thursday, Prince Harry and Meghan Markle landed in the Polynesian sovereign state of Tonga for a private audience with King Tupou VI and Queen Nanasipau’u at the Consular House in Nuku’alofa, before attending an official reception and dinner featuring traditional Tongan entertainment.

On the guest-list? None other than the country’s most famous oiled-up and extremely chiseled Olympic flag bearer, Pita Taufatofua.

Don’t remember him? He competed in both the Winter and Summer Olympics (in Rio, it was taekwondo; in PyeongChang it was the men’s 15 km freestyle in cross-country skiing). But he caught the world’s thirst when he walked both opening ceremonies shirtless.

Here’s a picture to refresh your memory. (You’re welcome.)

When he’s not competing or training for the Olympics, Taufatofua is a dedicated UNICEF ambassador. He travels around Tonga and the Pacific region, presumably while wearing a shirt, to promote youth development programs. He’s even got a self-published book out next month titled The Motivation Station.

“The reception started with Harry and Meghan taking a long time to meet and greet every single person there,” Taufatofua told me over the phone from Tonga. “That really stood out as something special, that both of them not only met, but also spoke to a lot of guests.”

When it was Taufatofua’s turn to speak with the couple, he thanked them for coming all the way to Tonga.

Prince Harry responded that he and his wife “loved how beautiful Tonga was,” Taufatofua says. “And they would like to come back more often.”

After complimenting Taufatofua on the positive impact he’s had since competing at the Rio and PyeongChang Games, Prince Harry couldn’t help but tease the Olympian about his big moment at the Games.

“We had a laugh about the oil,” Taufatofua says. “It was all in good fun!”

The royal couple seemed at ease and were “laughing and smiling through the whole dinner and reception,” Taufatofua says. During his speech at dinner, Harry said: “My grandparents have visited a number of times and Your Majesties have been frequent visitors to see my family over the years,” he said. “We have a strong bond as members of the Commonwealth; we share so much history—and common values.”

For the occasion, Meghan donned a beautiful white cap-sleeve beaded silk satin column gown by Theia paired with pumps by Aquazzura and a pair of snowflake earrings by Canadian jeweler Birks. She was also reportedly wearing Princess Diana’s striking aquamarine cocktail ring. Prince Harry opted for a classic black tuxedo with a bowtie for the occasion.

Pita skipped the oily bare-chest and grass skirt, in favor for a more formal suit and tie paired with a traditional Tongan skirt. His suit, he says, prevented him from teaching the royals the Sipi Tau, a traditional “war and welcoming dance” that evokes a ton of “passion and feeling.”

Taufatofua previously told Cosmopolitan he wanted to give a Sipi Tau dance lesson to the Duke and Duchess. It is one of Tonga’s most beloved customs and is similar to the haka dance in Māori culture that you’ll sometimes see rugby players do.

On Friday, the royal couple met the prime minister and visited with local craftspeople and artisans at the Faonelua Centre. Meghan wore a green-and-white striped Martin Grant dress, later changing into a sky blue shirt dress by Veronica Beard on a trip with Harry to Tupou College, the oldest secondary school in the Pacific, where they dedicated two forest reserves at the school’s on-site forest—the Toloa Forest Reserve.

Taufatofua tagged along to the Faonelua Centre, snapping some selfies with the royals. He even captured a sweet moment on film of a young Tongan girl giving Meghan a kiss on the cheek.

“Harry said they loved the beauty of Tonga,” Taufatofua says. “And that it feels like they are visiting family when they come.” For the record, everyone involved can visit me and my fam anytime.