Law & Order: Organized Crime is TV’s newest hit. Elliot Stabler is back on his own show and working with a new squad to hunt down criminals. One of the key members of his task force is Jet Slootmaekers, a hacker with the Organized Crime Control Bureau. HollywoodLife got the chance to speak EXCLUSIVELY with Ainsley Seiger about her role in the Law & Order universe.

Like so many millennials and Gen Zers, Ainsley grew up watching Law & Order: SVU, so she was well aware of Elliot Stabler. She teased “new developments” that took her by surprise on Organized Crime and being in the presence of the Mariska Hargitay. Ainsley also discussed that letter Elliot wrote to Olivia that has all fans talking. Read our Q&A below: 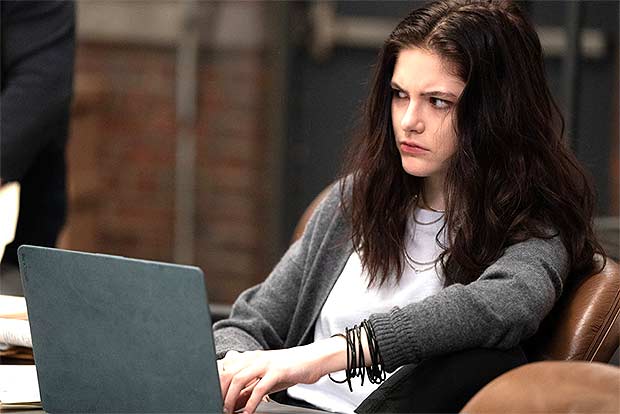 What was your familiarity with the Law & Order universe before joining it yourself? I feel like everyone in their 20s watching SVU growing up.
Ainsley Seiger: I also watched SVU growing up. I feel like it’s such a part of a lot of people my age’s childhood or adolescence. In a big or small way, everyone knows Law & Order. It’s so iconic. I was definitely familiar with it. I knew the show and loved it. I am such a huge fan of true crime. Usually, if I’m just doing the dishes or cleaning up my apartment, I’ll either have on a podcast, or I’ll watch SVU on my TV as I’m folding my laundry. It was kind of crazy to show up on my first day and look over at my co-worker and be like, that’s Chris Meloni. This is my life now.

That must be a surreal thing for you.
Ainsley Seiger: It happened yesterday. I worked with Mariska for the first time. She walked in, and in my head, I was like…that’s Olivia Benson. What is happening right now? It was the coolest thing just to show up yesterday when she was on set with us. I didn’t have any lines yesterday. One of my favorite things about Jet is that she’s very active but in a very silent way. She’s always there. She’s always listening. She’s always a part of whatever is going on. But she’s a very I will not speak unless spoken to kind of gal, which I have mad respect for because I will talk relentlessly, even if no one is listening to me. I didn’t have any lines or anything. I was just sort of a part of what was going on. It was the coolest thing in the world to just be there and watch her work. I have so much respect and admiration for her. I really tried not to look like an insane person yesterday around her. It was such a lesson in how to handle yourself with such grace in a room.

What was it about the character of Jet that really stood out to you when you were going for this role?
Ainsley Seiger: I remember getting the audition, and I looked at it on my email. My mentality with auditions and everything has really shifted a lot in the past year. In the beginning, I would really hype myself up, and I wouldn’t be able to stop thinking about stuff. And then I would keep thinking about it after I’d sent it in. It just became really unhealthy. What I tried to do was send it in, and then stop thinking about it. I would look at the email once and try to remember much as I could about the tape and what they wanted for the character and then not look at it anymore, just so that I didn’t get too invested in it. But I kept looking at this email. I was breaking my own rule, and I kept looking at this email. I remember hearing that there was going to be a spinoff. I read the sides, and one of the scenes that I taped didn’t end up being a part of the series, but the first one was the first thing that I had in the pilot with Chris. I read it and was like, oh, she’s not going to put up with anything. I didn’t know at the time that she had worked with him before that, so there’s at least a little bit of an established relationship there. Interestingly enough, what really spoke to me was that she is this young character who is not nearly as worldly-wise as you would think that someone like Stabler is, and yet they’re really on a very similar level. I think in terms of they may do things their way, and they won’t be told what to do. I love that she’s very anti-social and that she’s kind of a quiet smoking gun a lot of the time. She just does her thing. She doesn’t need praise. She doesn’t need credit for it. She knows what she’s doing is the best for the team. It’s also super cool to play someone who has been a lone wolf for a very long time and now is expected to be a part of this squad.

We’re only three episodes in, and there’s a lot of ground to cover. Will we learn more about Jet and her background over the course of the season?
Ainsley Seiger: I hope so. There have been a few developments that have even taken me by surprise. I read one of our new scripts last night, and I came across something that I didn’t know yet, which is very cool. Something that I love talking about with my castmates is that we actually don’t know anything until we get the next script. Everything is a surprise unless we find a way to twist the arm of our script supervisor or the police coordinator. We’ll be like, “Hey, can you tell me anything? Can I give you five bucks for you to tell me what’s going to happen in the next episode?” But everything is new as it’s happening, and there have been some recent developments for Jet that I think are super cool. I myself can’t wait to figure out how that came to be. There’s only eight episodes in this first season, and this is Stabler’s world. It’s so important to reintroduce him in the way that he needs to be reintroduced. I think there’s so much that has to happen with him and with Benson and Bell before we really get into the nitty-gritty of the lives of the rest of the task force, but I know that will happen eventually. I can’t wait because Jet is a mystery, even to me. Something that I say a lot to people on set is one of my favorite things about Jet is that you can kind of make her do anything, and it makes sense because she’s that mysterious. She just has that air of, of course, you do that. Why would I think otherwise? 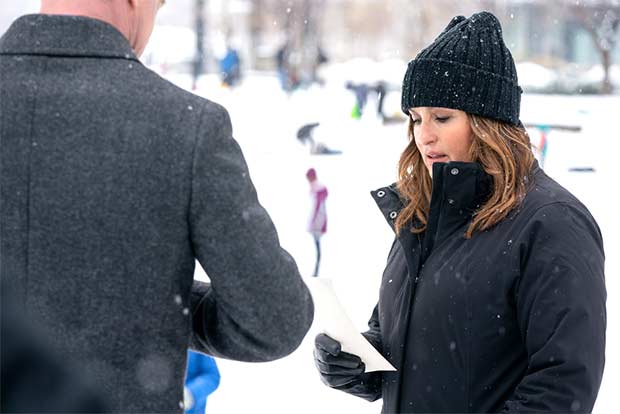 This part of the season revolves around Stabler going after Richard Wheatley. The stakes continue to get higher. What can you tease about how that is going to unravel as the season moves forward?
Ainsley Seiger: What I will say is that I keep mistakenly thinking that I know what is going to happen, or I know where something is going to go. I’m just wrong 100 percent of the time. I remember reading the script for one of the next couple of episodes, and even just reading the script was so invested in what was going on because it was so high stakes. Everything felt so intense. I got to the end of the episode, the cliffhanger at the end of the episode, I read it, and out loud in my apartment I gasped. I’ve never done that before, and I’m not that kind of person. I thought at the time that this is going to be the most insane episode of television. No one’s going to know what to do with themselves. Every script is a roller coaster ride.