The chair of Parliament’s powerful privileges committee has vowed to investigate how The Guardian came to access details of its report into former attorney-general Christian Porter’s use of a trust to contribute funds to his defamation action against the ABC before the document was publicly released.

Mr Porter has always denied the historical rape allegation and settled his claim against the ABC. The committee looked at Mr Porter’s use of a “blind trust” to pay for part of his legal fees, along with the broader issue of anonymous donations sourced via crowdfunding. 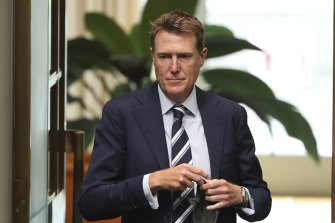 The privileges committee investigated Christian Porter’s use of a trust to contribute funds to his defamation action against the ABC, but The Guardian got it before it was made public.Credit:Alex Ellinghausen

Its report was tabled in Parliament on Tuesday morning, concluding the Member for Pearce and former attorney-general’s declaration “was consistent with his obligations under the Resolution on the Registration of Members’ Interests”.

“However, the Committee considers all Members should seek to provide the greatest level of transparency in the disclosure of the source of gifts received by them,” it added.

The Guardian published the details of the report on Monday night, prompting Russell Broadbent, the chair of the committee that enforces Parliament’s standards, to say its confidence had been breached and its integrity besmirched through the leak.

“Someone has decided to use the committee as a dirty rag and throw it in the bin,” Mr Broadbent said.

He said the committee would investigate the leak because its “confidence has been surely offended”.
But, Mr Broadbent said, as chair he would take responsibility and resign from the committee next year.

Several MPs including Health Minister Greg Hunt and the father of the house, Kevin Andrews, then spoke to convince Mr Broadbent not to go. Labor MP Warren Snowdon said he spoke for his ALP and Coalition colleagues when he said the leak was not Mr Broadbent’s fault and that he still enjoyed the full confidence of the committee.

He said the deliberations about Mr Porter were collegiate, not partisan.