Labor will make immigration reform a key plank in its election policy agenda, vowing to end the nation’s dependence on short-term visa holders and make it easier for foreign workers to become permanent residents. 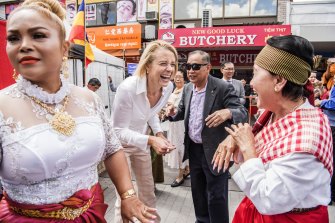 “We need to reverse the model we were on that was putting Australia on a path to becoming a guest worker nation,” Ms Keneally said in an interview.

“Prior to the pandemic, we had the second-highest number of temporary migrant workers in the OECD behind the United States.

With Prime Minister Scott Morrison poised to call an election within days, Ms Keneally flagged that Labor will make significant immigration policy announcements during the campaign.

“We will have a fair bit more to say [on the issue] before the election,” she said.

Labor sources said the party wanted to reform the partner and parent visa subclasses and crack down on exploitation in the visa program for farmworkers.

Ms Keneally said short-term worker visas had a role to play in Australia but had too often been used by businesses to avoid paying local workers a decent wage and invest in training.

“It’s about ensuring the migration settings don’t make it easy for employers to skip labour market testing or pay lower wages to a temporary migrant rather than investing in the skills and opportunities for Australians,” she said.

The number of short-term visa holders in Australia surged to 2.4 million in the years leading up to the pandemic before slipping to 1.8 million following the border shutdown.

Business leaders have complained that skills shortages – exacerbated by a decline in migration during the pandemic – are holding back economic growth.

Ms Keneally said the growing reliance on temporary workers since the 1990s “completely turns on its head the model of successful migration that Australia has been built on”.

“It’s creating a permanently temporary class of people – a second society where people are locked out of rights and services,” she said.

“It’s really quite sad given John Howard said you either invite someone to come here permanently or you don’t invite them.”

“If you have people who are coming here temporarily, year after year, spending month after month here, why don’t we give them a bit of certainty and actually allow people to stay who are making a contribution to the country?” Mr Albanese told the National Farmers Federation.

A spokesman for Immigration Minister Alex Hawke did not respond to requests for comment.

A report released last year by the Migrant Workers Centre found most foreign workers suffer wage theft while employed on temporary visas and are “forced to hop from one temporary visa to another until exhaustion”.

Workers on temporary visas are especially vulnerable to exploitation because their visas are tied to their employer and they are required to leave Australia within 60 days if they lose their job, the centre said.

A Liberal-dominated parliamentary committee last year recommended the government provide a pathway to permanent residency for all migrants on employer-sponsored visas who have competent English language skills and are aged under 45.

International student graduates who score impressive marks and work in a field with persistent skills shortages should also be eligible for fast-tracked permanent residency, the committee said.

The government last year announced that around 20,000 workers on short-term visas would be given priority access to permanent residency as a reward for staying in Australia during the pandemic.

Jacqueline Maley cuts through the noise of the federal election campaign with news, views and expert analysis. Sign up to our Australia Votes 2022 newsletter here.