Victorian Labor senator Raff Ciccone has warned his colleagues against demonising regional industries, particularly forestry, as the federal opposition prepares to finalise its climate policy ahead of next year’s election.

In a speech to the Senate on Tuesday night, Senator Ciccone said “extremists” who sought to damage or disrupt the activities of timber workers were not only hurting the livelihoods of families but would make it harder for Australia to hit its climate goals. 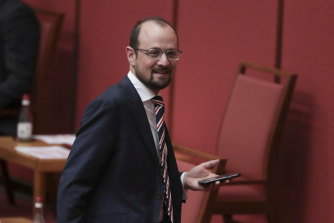 The senator has been a vocal advocate for timber workers and has criticised his side of politics over the Victorian Labor government’s decision to phase out native forest harvesting from 2024, with a full shutdown by 2030.

The federal opposition is close to settling its climate policy, which is likely to include revised emissions reductions targets, but is wary of creating a blue-collar worker backlash after failing to convince voters over climate change during the past decade.

Senator Ciccone told the Senate on Tuesday evening the timber industry would prove critical to Australia’s hopes of hitting net zero by 2050, which the federal government officially signed up to at this month United Nations climate summit.

“We cannot afford to be distracted by radicals more concerned with making themselves feel good than protecting our planet,” Senator Ciccone told the Senate.

“The real climate heroes are providing sustainable, green building materials to our construction industry. They are taking and storing carbon from our forests and re-growing the harvested trees to store even more carbon.”

He cited research from the Centre of Policy Studies at Victoria University, released earlier this month, which found the forestry industry would almost double as decarbonisation boosted tree planting to take advantage of bio-sequestration opportunities.

The report found a net-zero policy would lead to significant increases in forested land and increased sales of logs for processing and export as forest pulp.

Senator Ciccone said the paper showed the forestry industry was Australia’s greenest form of carbon capture and would need to grow to meet climate targets.

“Radical activists need to understand that attacking the timber industry is not going to prevent climate change. You are targeting an industry that needs to get bigger, not smaller, to protect our planet.”

He said the Coalition government also needed to show greater support for the industry by spruiking the role forestry would play in reaching emissions targets over the coming decades.

“The Morrison-Joyce government needs to understand that leadership isn’t just waving a brochure around at a press conference,” he said. “Leadership is assessing the impact of your decisions on the Australian economy, so we can help those who will need a leg-up and create the jobs of the future right here in Australia.”

The industry has argued Australia has untapped potential as a bioenergy powerhouse through industrial heat in the future renewable energy mix. The federal government’s road map forecast that bioenergy could make up a fifth of Australia’s resource potential.

Veteran CFMEU forestry union leader Michael O’Connor has criticised Victorian Labor’s “disgraceful” treatment of timber workers in the state and warned it was under­mining federal Labor’s pitch to voters that workers and communities reliant on transitioning industries would be looked after.

“Federal Labor’s task of convincing blue-collar workers and communities they will be looked after is threatened by the approach of the Andrews government toward timber workers and their communities. Because these workers are being thrown on the scrap heap,” Mr O’Connor said last month ahead of the Glasgow climate summit.