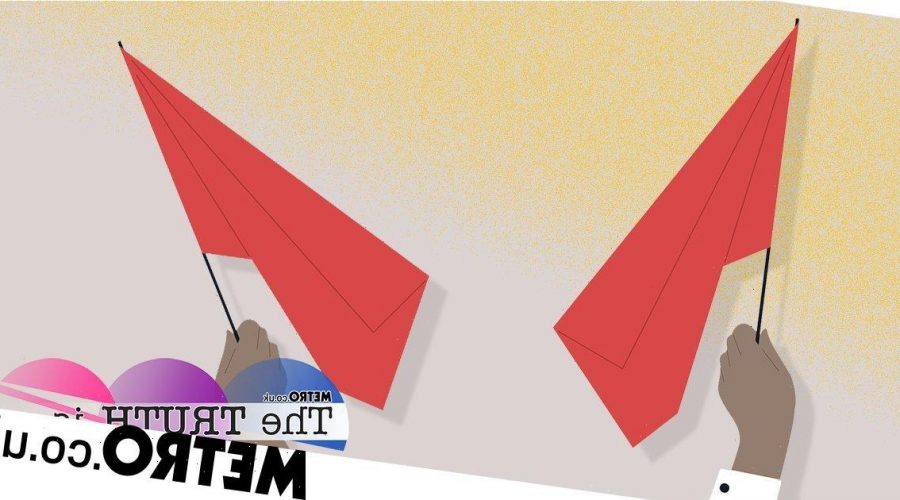 They’re having a moment.

From Love Island contestants bemoaning the negative qualities of their crushes, to articles describing the signs to look out for in toxic friendships, ‘red flags’ feel like a cultural preoccupation right now.

In only the last month I’ve heard various friends – all compassionate, sensible, and intelligent people – fretting about whether their new partner, friend or boss is demonstrating one of these dreaded signs.

It seems we’re constantly being asked to consider whether the other people in our lives could be manipulative, destructive, or harbouring bad intentions.

As an idea, it certainly has a place. A redheaded friend recently told me about a man who, on their first date, said he didn’t normally date women with her hair colour.

When she asked why he had asked her out, he said that when he’d seen her, he had thought she had been wearing a wig. She described this as a red flag, and I agree.

But in general, I feel like such widespread use of the term ‘red flags’ strips all the joy, humanity, and pleasure out of connecting with someone new. When we approach meeting new people with hyper-vigilance towards their possible faults, I worry we might mistake their ordinary humanness for toxicity.

Yes, it might be satisfying to do an online quiz that reveals your charismatic but cruel boss is a narcissist, or to read an article that suggests the friend who is pissing you off might have serious emotional problems.

But surely a more sustainable, healthy way of approaching relationships is to enter them in good faith, assuming the best in others?

And are all the red flags we’re being asked to use as reasons to cut people out of our lives always that bad?

In some cases, yes. Someone stopping a partner from seeing their friends or being excessively jealous and possessive are definite warning signs of abuse, according to the domestic violence charity Refuge.

Then there are more personal bottom lines. For me, if they own a copy of a Jordan Peterson book, I’m getting out of there.

But one of the articles I read recently suggested one red flag that shows your partner doesn’t love you is that they pick fights about petty things, leading me to wonder if the author had ever actually been in a long-term relationship.

Other crimes included not featuring on their social media accounts after a few months or being told they love you after a few dates.

Such a narrow window for what counts as acceptable behaviour leaves little room for spontaneity. Some people like to jump feet first into a new fling, others are more cautious, but these are normal differences in human behaviour that shouldn’t be pathologised.

This trend feels connected to a rise in dehumanising other people more generally. There is a craze right now for screenshotting personal interactions from dating apps before pulling them apart and mocking them.

Some accounts set up for this purpose do an important job of shining a light on sexism, racism and misogyny in the dating world and rightly so. I’ve talked about one of my terrible dates myself.

But some posts seem to be less about calling out problematic behaviour and more about humiliating the socially awkward in a way that can feel punishing, and even cruel.

Someone posted one of these interactions on Twitter recently. She had texted someone she was dating to say she was sad because her dog had died. Her Tinder match gave a perfectly reasonable, sympathetic response and then asked if she’d like to meet up.

She reposted the interaction to her socials with a comment, lumping this ‘terrible’ guy in with others on the apps. The post received 100s of likes and a chorus of comments decrying her date’s insensitivity.

Perhaps he could have waited a little longer to suggest a date, but did this really warrant being exposed to hundreds of strangers on the internet?

This seems a clear example of the way our obsession with looking for the bad in others – in other words, searching for red flags – has seeped into our everyday behaviour. Even quite normal interactions are being interpreted as problematic.

Sadly, once a red flag has been spotted, the suggestion is almost always to cut the other person out of your life.

But this skips over the stage where you have an open and honest conversation about what has bothered you. Perhaps it’s easier to see the other person as a ‘baddie’ than to share with people how they have hurt us and be open to the feelings of vulnerability that might entail.

This cut-and-dry, red-flag-aware way of looking at situations also forgets that relationships are a two-way street, with both people contributing to a dynamic. I recently told an old friend that it had bothered me when I came to her with a problem and she rushed to give me advice rather than listening or empathising first.

She had thought advice was what I was looking for and was glad I had mentioned it – so it ended up being a productive conversation for our friendship.

Perhaps what we should see as the biggest red flag is demonising people for the most minor of infractions, rather than sitting down for a chat and taking the bold risk of seeing the other person as a full and complex human being, just like us.

Metro.co.uk’s weekly The Truth Is… series seeks to explore anything and everything when it comes to life’s unspoken truths and long-held secrets. Contributors will challenge popular misconceptions on a topic close to their hearts, confess to a deeply personal secret, or reveal their wisdom from experience – good and bad – when it comes to romance or family relationships.