Just hours after Kanye West took to Twitter to put the Travis Scott and Drake drama to rest, fans picked up on a major clue that hinted that the "Sicko Mode" hitmaker was maybe not as on board with this reconciliation as previously thought. On Saturday, Dec. 15, Scott posted an Instagram Story selfie showing him with a single Nike sock adorning his sweatshirt, but before you brace yourselves for World War III on Twitter, there’s a simple explanation. Kylie Jenner’s comment on Travis Scott and Kanye drama shows that the rappers have put the beef behind them once and for all, and I’m so thankful. Elite Daily reached out to Jenner’s team for further comment and clarification on the Instagram Story photo, but did not hear back by the time of publication.

If you’ve been keeping up with the very public feud between West, Drake, and Scott, which has been playing out on Twitter over the last couple of days, you know that the "Gold Digger" rapper was not pleased that his former protégé tapped the "Hotline Bling" hitmaker for his track "Sicko Mode." One line from the song in particular — "Jesus Christ/checks over stripes/That’s what I like/That’s what we like" — appeared to really irk West, who took the stripes commentary as a diss against his collaboration with Adidas.

On Friday, Dec. 14, he alerted his fans, "Meeting with Trav tonight. Bet it never be a checks over stripes line again on a Trav song on Donda."

So, when Scott posted a selfie his Instagram Story on Saturday, Dec. 15, users were quick to jump on the fact that he just so happened to be wearing a sweatshirt with what appeared to be a giant Nike sock on it — just hours after Ye tweeted, "Drake and Trav both love Ye more than anyone and I love those guys back. We love everyone," then "Met with Trav at my crib this morning. We expressed ourselves. It’s all love." 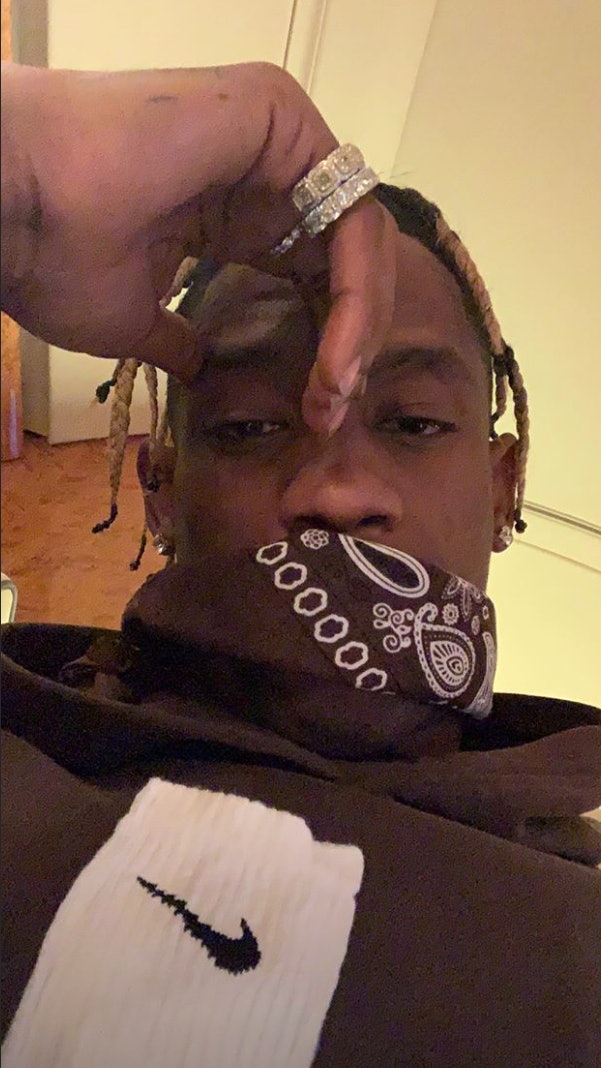 Just as I was starting to think that the Kardashian-Jenner clan was going to have the most awkward Christmas dinner this year, Kylie Jenner headed to Twitter to clear things up and reiterate that, once and for all, the two parties are moving on from the drama.

In response to Twitter user @AT_Tunechi, who re-shared the Instagram Story image with several laughing emojis and the caption, "Travis Scott is my kind of petty," the makeup entrepreneur cleared the air.

"He’s not being petty," she wrote on Sunday, Dec. 16. "This is a sweatshirt design (the sock is a part [sic] of the design). everyone is good, moved on, living life. for anyone who wasn’t aware – travis has had a deal w Nike and still does. point is.. it’s all been talked out. It’s only positive energy."

While Scott does have a collaboration with Nike, some fans are a little skeptical about this claim, considering the timing of the whole thing.

Whatever the case is, the Kardashian-Jenner family doesn’t owe the public an explanation for what clothes they choose to wear, and the reality star’s decision to comment seems to emphasize that they’re putting family first. Plus, judging from Twitter, it looks like West and Scott have cleared up any misunderstandings and moved on from their public feud, so I’m hoping that we won’t be seeing any more beefing leading up to the holidays.