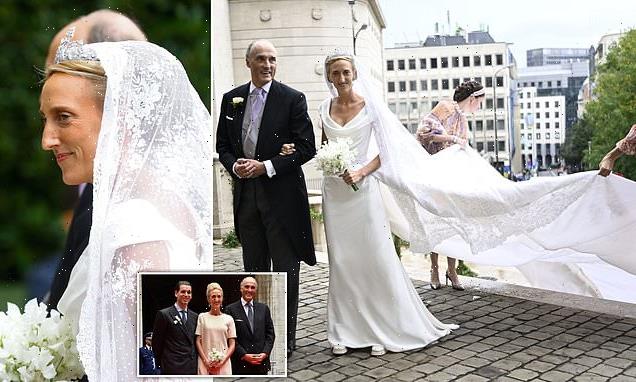 A royal wedding! King Philippe of Belgium’s niece Princess Maria Laura, 33, is stunning in a satin gown and lace veil as she marries British investment banker beau in a Brussels cathedral following their civil service yesterday

Princess Maria Laura of Belgium wore a stunning cowl-necked bridal down with a lace veil and a long train as she arrived at her wedding ceremony to William Isvy.

The 33-year-old Princess, who legally married her British investment banker beau yesterday in a civil ceremony, attended the religious celebration at the Cathedral of Saint Michael and Saint Gudula this afternoon.

Maria Laura, the niece of King Philippe and Queen Maathilde, was pictured arm in arm with her father, Prince Lorenz, outside the Cathedral this afternoon.

Carrying a bridal bouquet of white sweet peas, the Princess wore a floor-length white gown with chunky heels, while her veil trailed down the steps behind her. 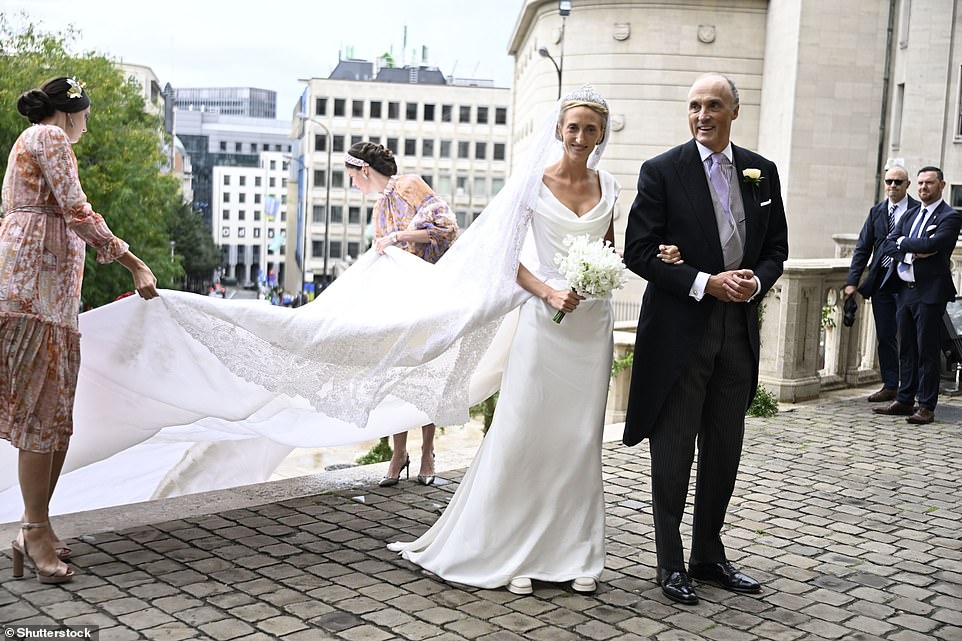 Princess Maria Laura with her father, Prince Lorenz of Belgium, outside the Cathedral of Saint Michael and Saint Gudula in Brussels, Belgium 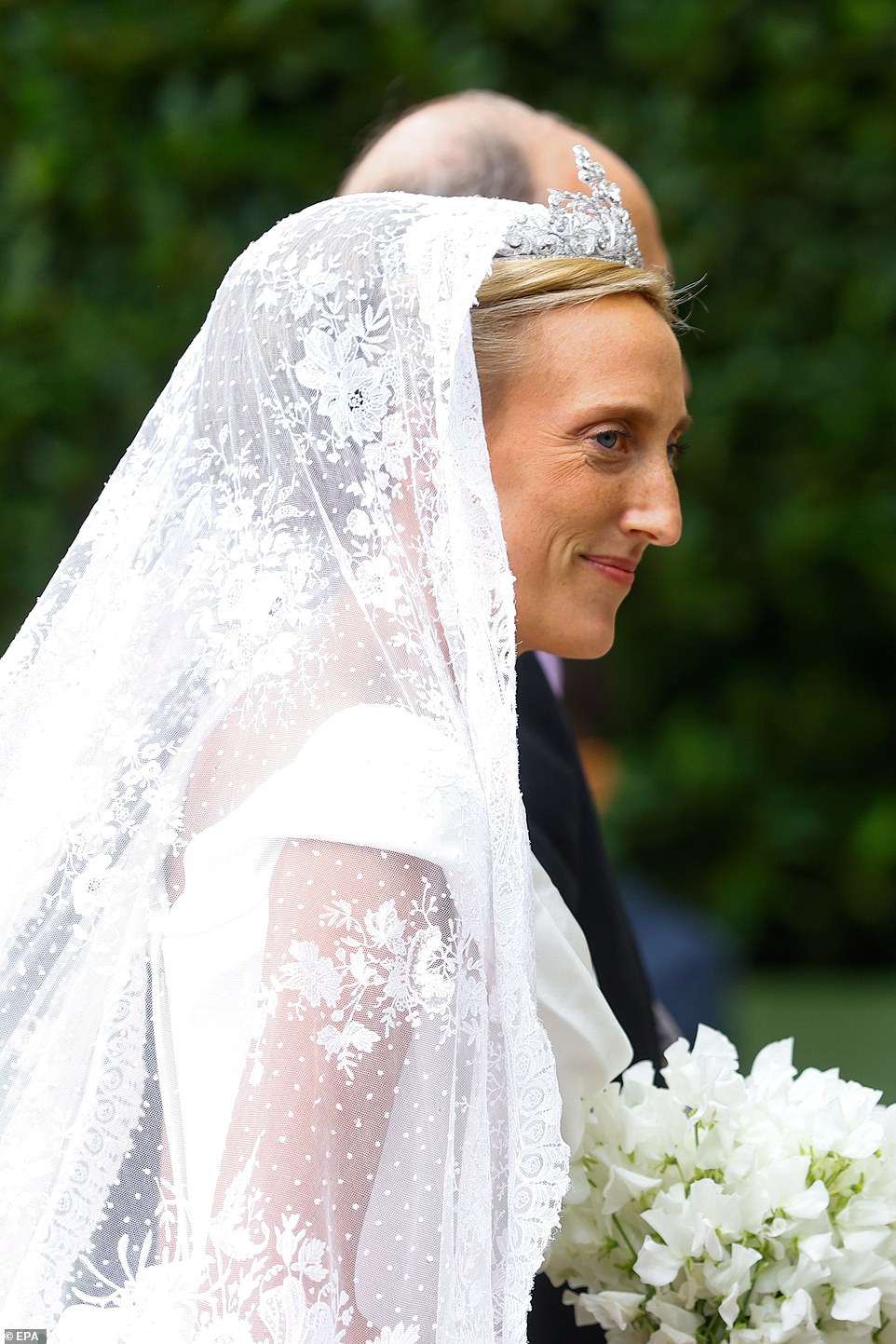 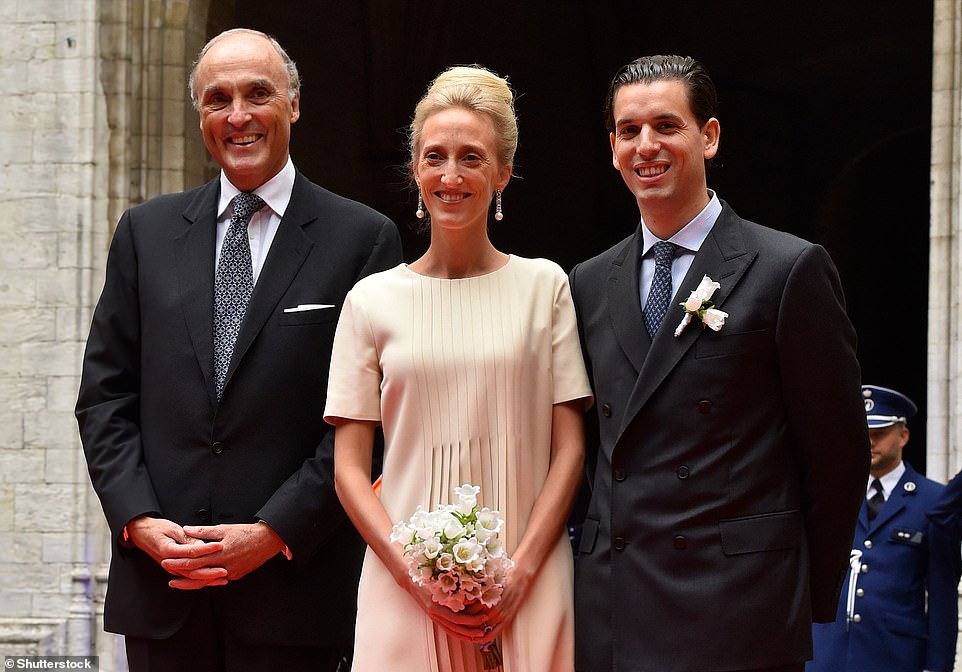 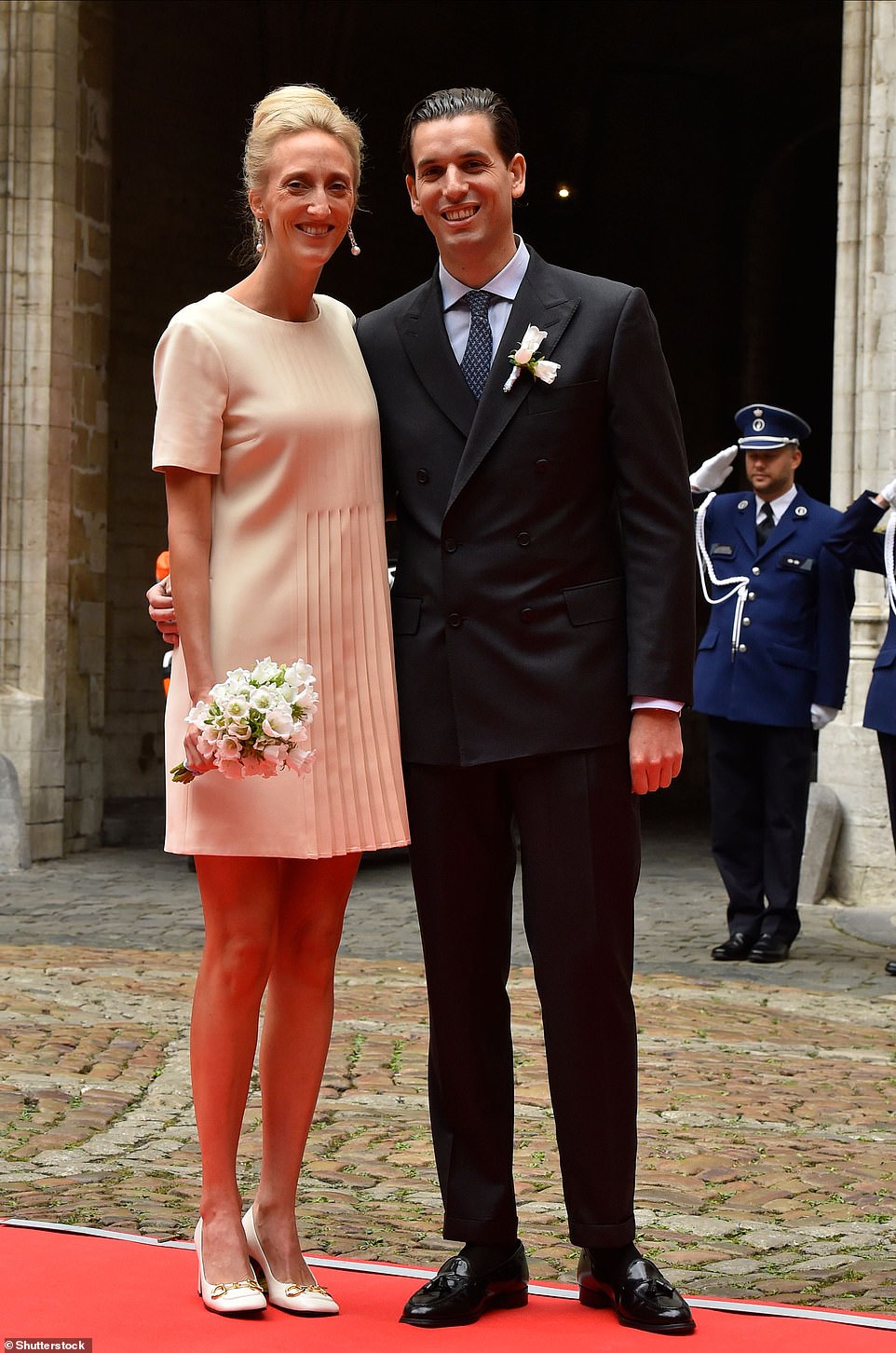 For the civil ceremony the 33-year-old princess wore an understated off-white vintage Prada dress in a shift-style with pleats, paired with white pumps from Gucci 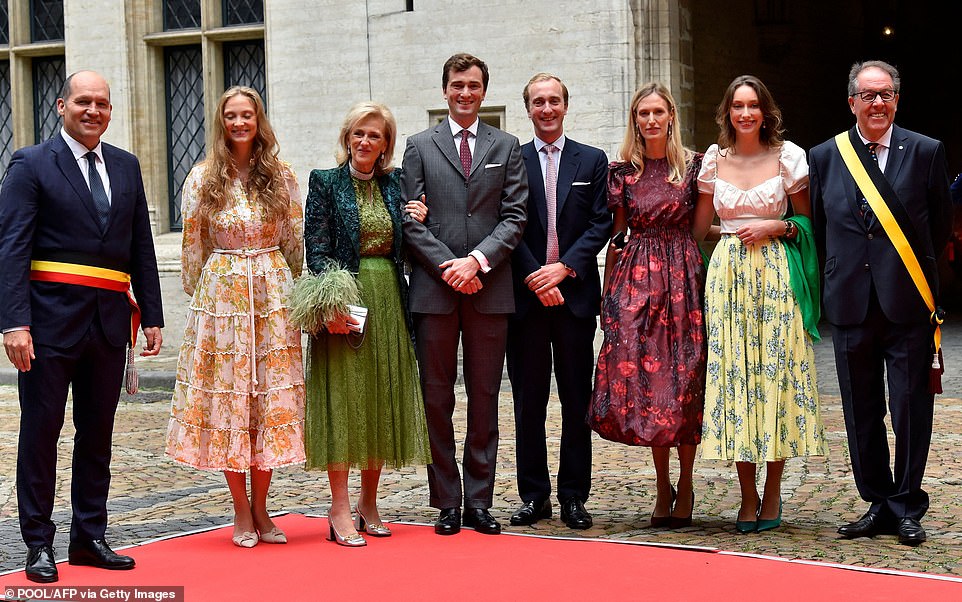 She accessorised her bridal look with a diamond tiara, to which the veil was secured, and extravagant teardrop earrings.

On Friday afternoon the Princess legally married her new husband at the civil ceremony in City Hall, Brussels – which was attended by senior members of the Belgian Royal Family.

For the lower-key event, the bride wore an understated off-white vintage Prada dress which she paired with off white pumps from Gucci.

She wore her blonde locks in a neat updo, which revealed a pair of pendant pearl earrings.

She was also carrying a small bouquet of white lilies for her civil ceremony. 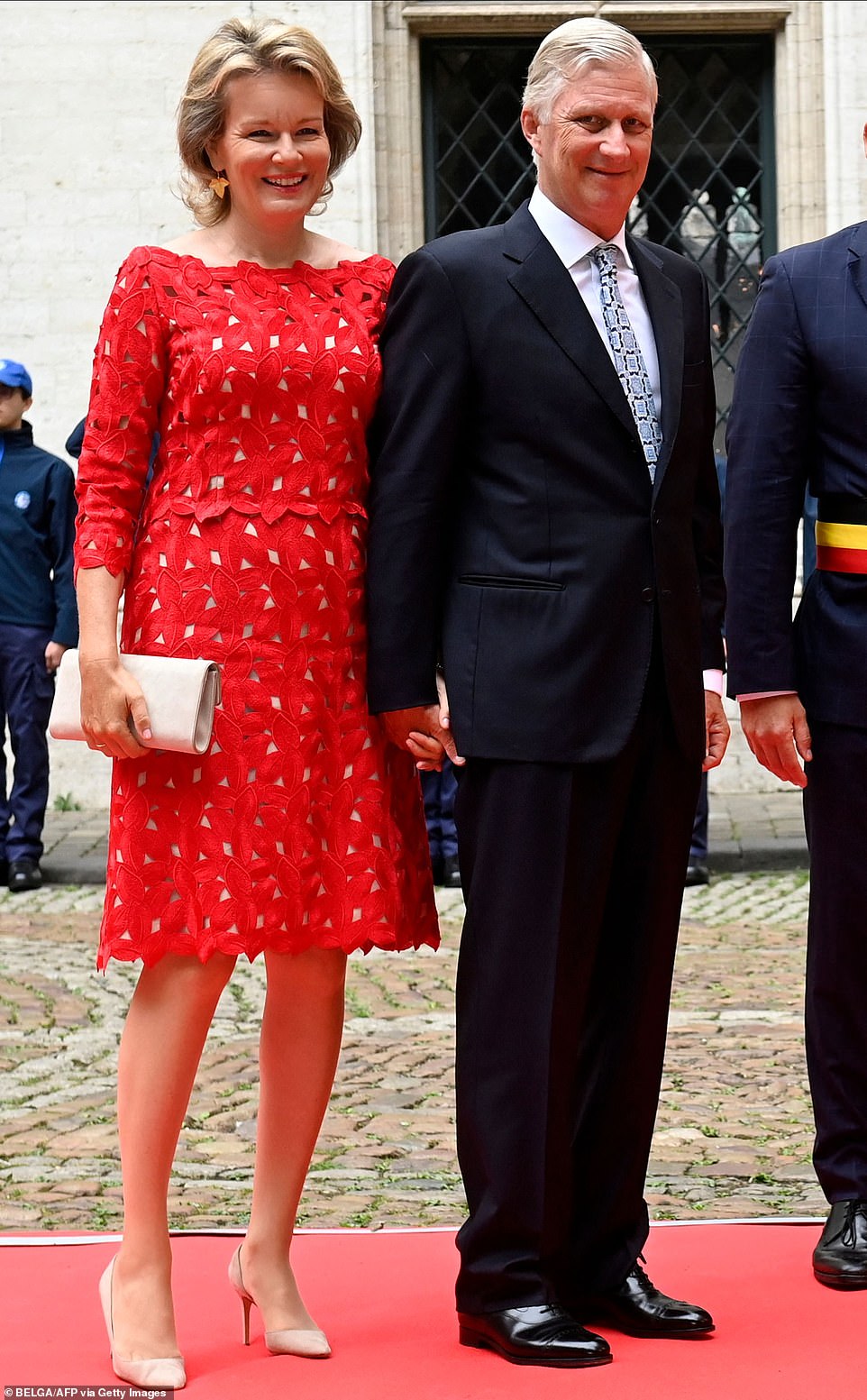 Queen Mathilde of Belgium and King Philippe of Belgium attended the civil ceremony at City Hall in Belgium, with Mathilde looking radiant in a red dress

The bride’s uncle and her aunt attended the ceremony, with stylish Mathilde dinning a red creped dress for the occasion.

The bride was driven to the Town Hall in a vintage car with her father, Prince Lorenz, for the private affair, which was only attended by about 35 people, according to Belgian media.

The blushing bride looked beautiful in the pleated Prada number, which she paired with vintage Gucci heels.

Meanwhile, the groom looked dapper in a grey suit, matched with a blue tie and light pus shirt. The lapel of his jacket was adorned with one of the flowers of his bride’s bouquet.

The ceremony was attended by Maria Laura’s immediate family, including her mother Princess Astrid, who was beaming by the entrance of the Town Hall. 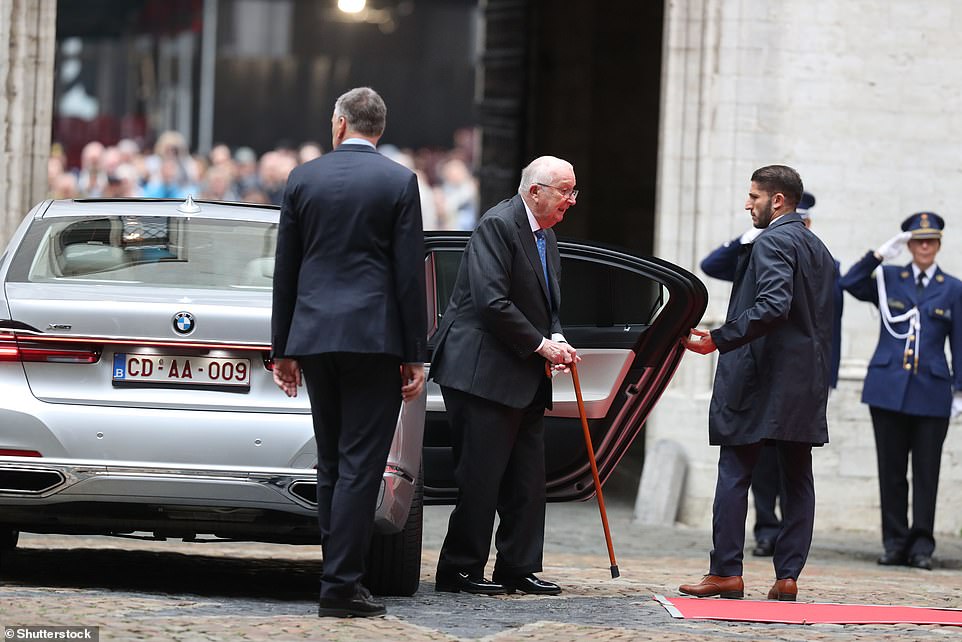 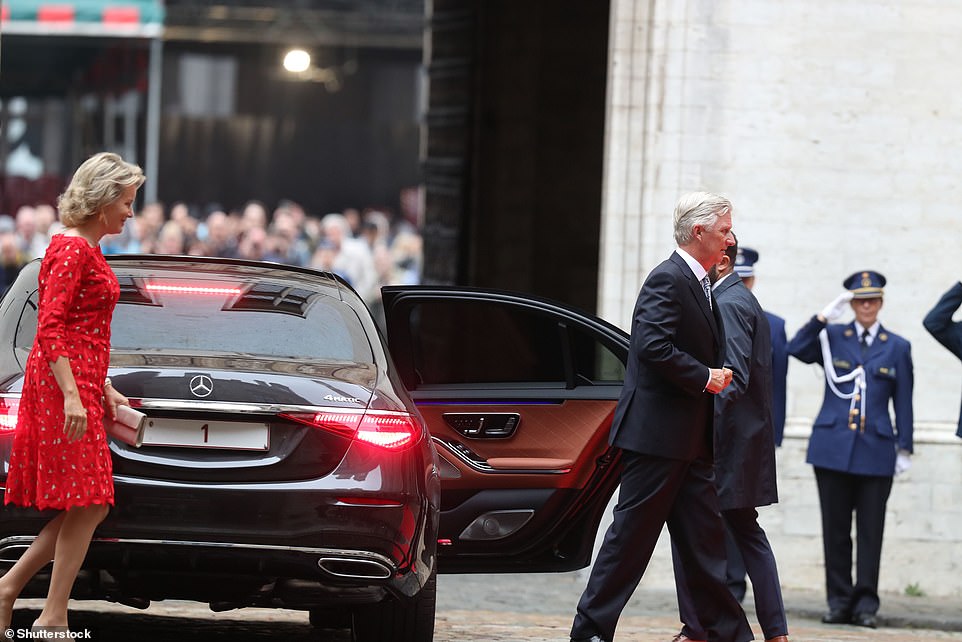 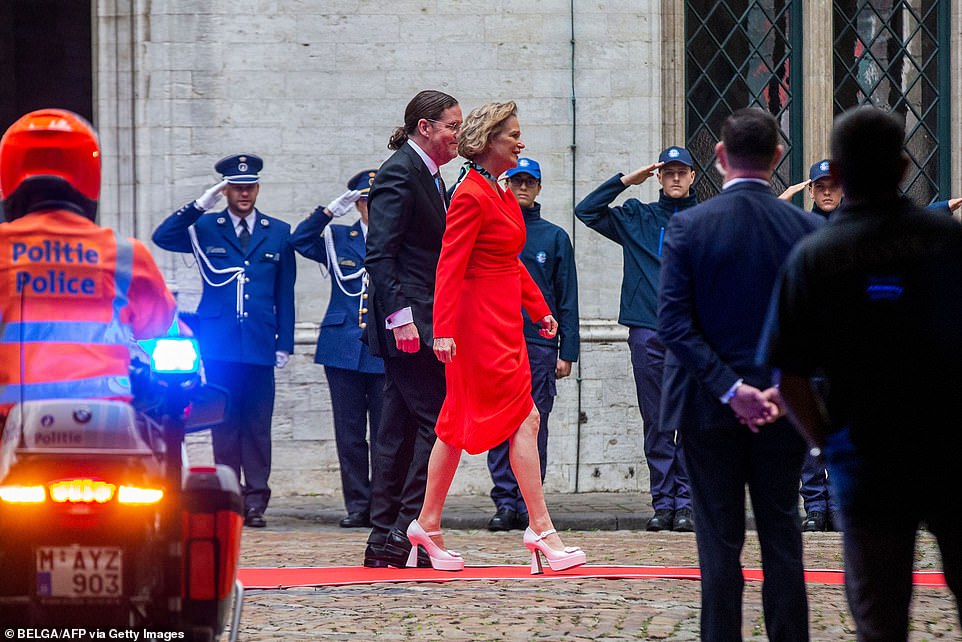 She was seen standing proudly with her brood, who had also come to watch their sister get married.

Meanwhile, her brother Amadeo attended the ceremony with his wife Elisabetta Rosboch von Wolkenstein, who looked picturesque in a floral burgundy dress.

The royal, 33, who lives in London, revealed in December she was set to marry her London beau William, with the couple sharing a series of snaps at the time.

According to Tatler, the couple will tie-the-knot on 10 September in a Roman Catholic ceremony due to take place at the Cathedral of St Michel and St Gudula in Brussels. 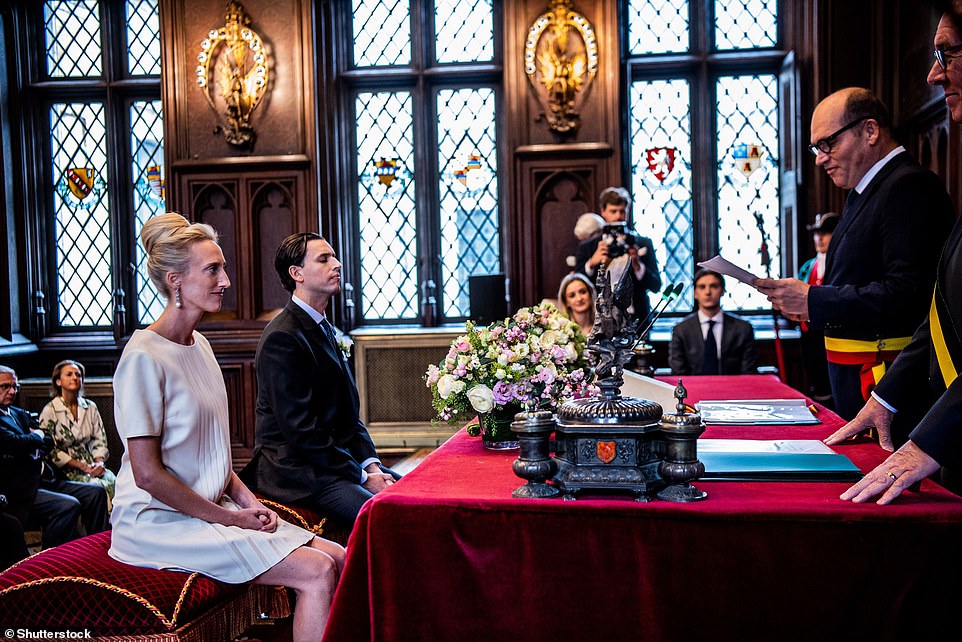 Maria-Laura (pictured during her wedding ceremony) is the daughter of Princess Astrid – King Albert’s eldest daughter – and her husband Prince Lorenz, the head of the House of Austria-Este 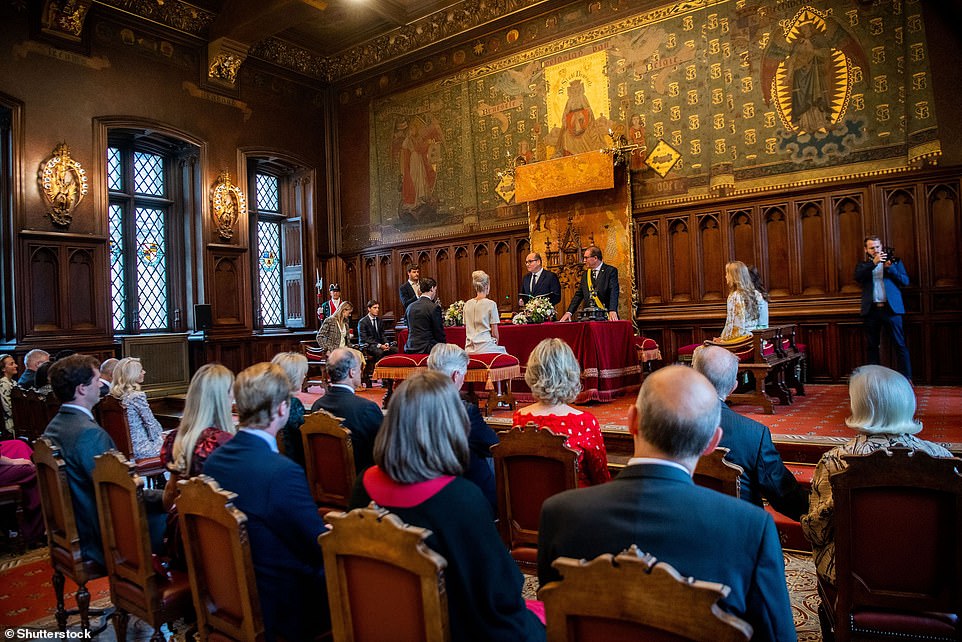 Maria Laura (pictured during her wedding ceremony) is also the granddaughter of Albert II of Belgium, who abdicated in 2013 for health reasons

The Belgian royal family will likely be in attendance, as well as other European royals.

This will follow in royal tradition, much like the weddings of her ancestors, including her parents, grandparents and great-grandparents.

Maria Laura, is the daughter of Princess Astrid – King Albert’s eldest daughter – and her husband Prince Lorenz, the head of the House of Austria-Este. Princess Astrid is the younger sister of Philippe of Belgium, the current monarch.

Maria Laura is also the granddaughter of Albert II of Belgium, who abdicated in 2013 for health reasons. 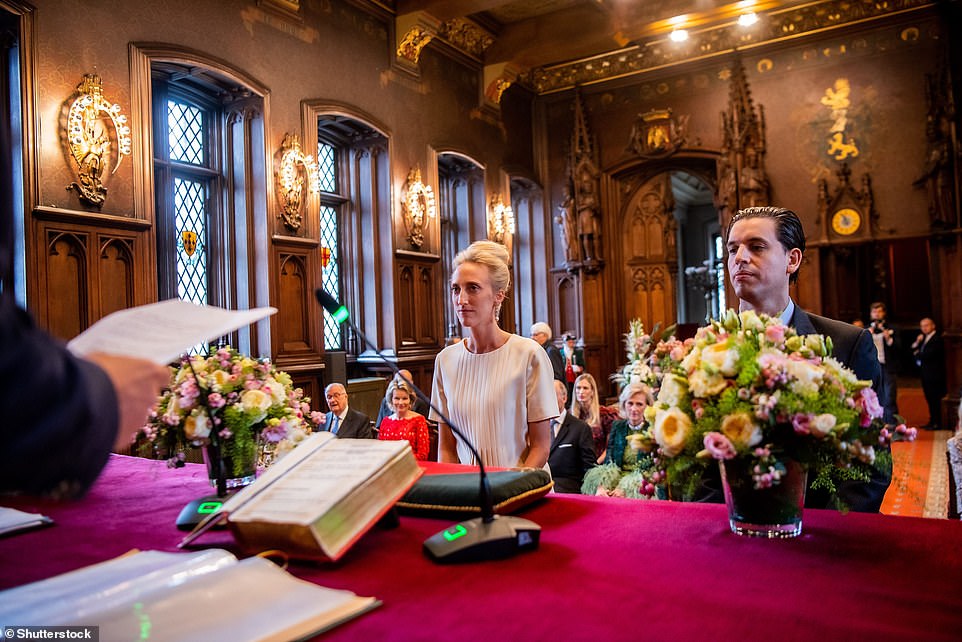 Princess Maria Laura (left) lives in London with her British husband William Isvy, who is an investment banker, but the pair decided to wed in the bride’s home country of Belgium 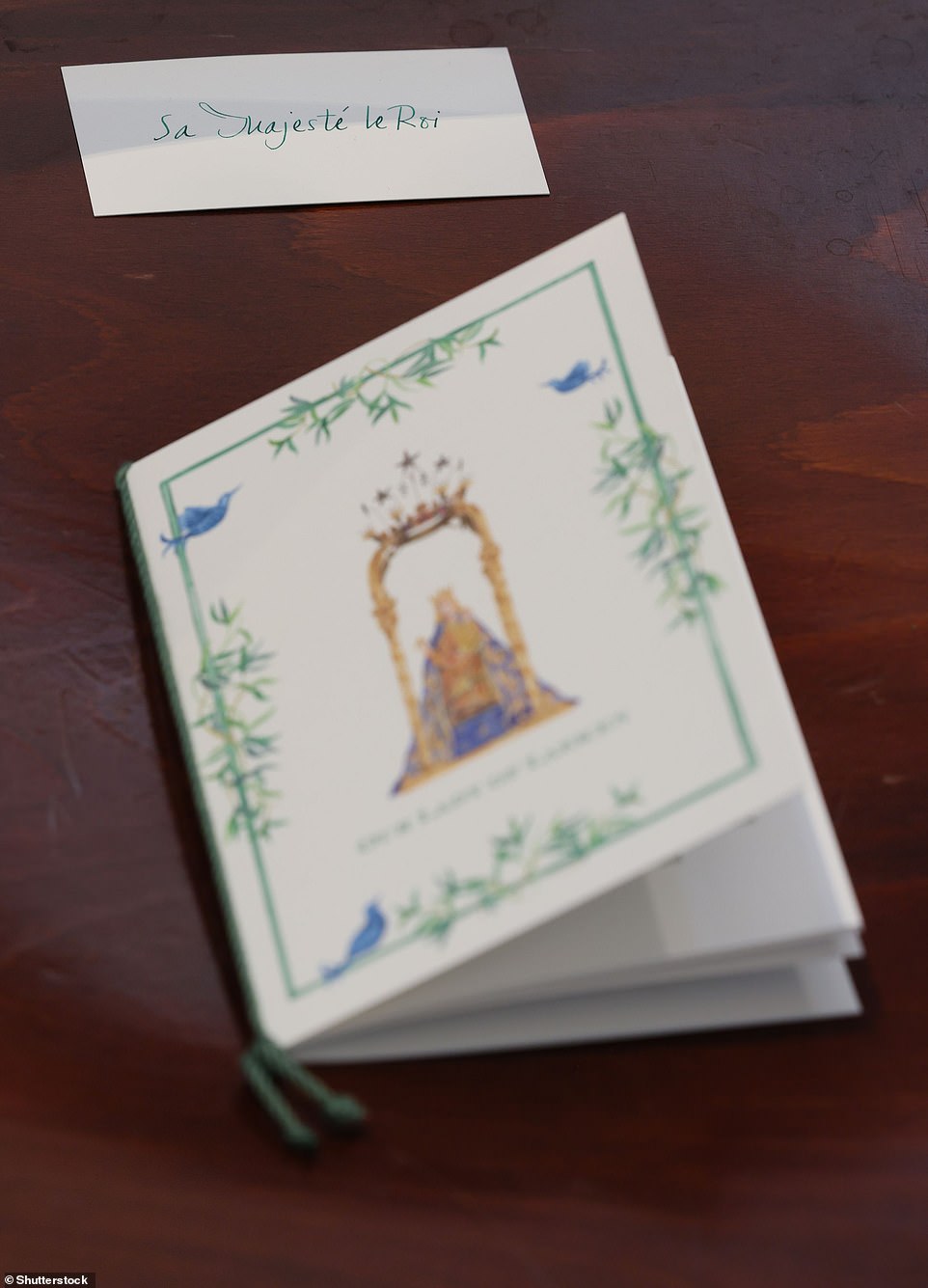 The wedding programme and order of service at the seat of King Philippe during the civil ceremony which was held in City Hall, Brussels 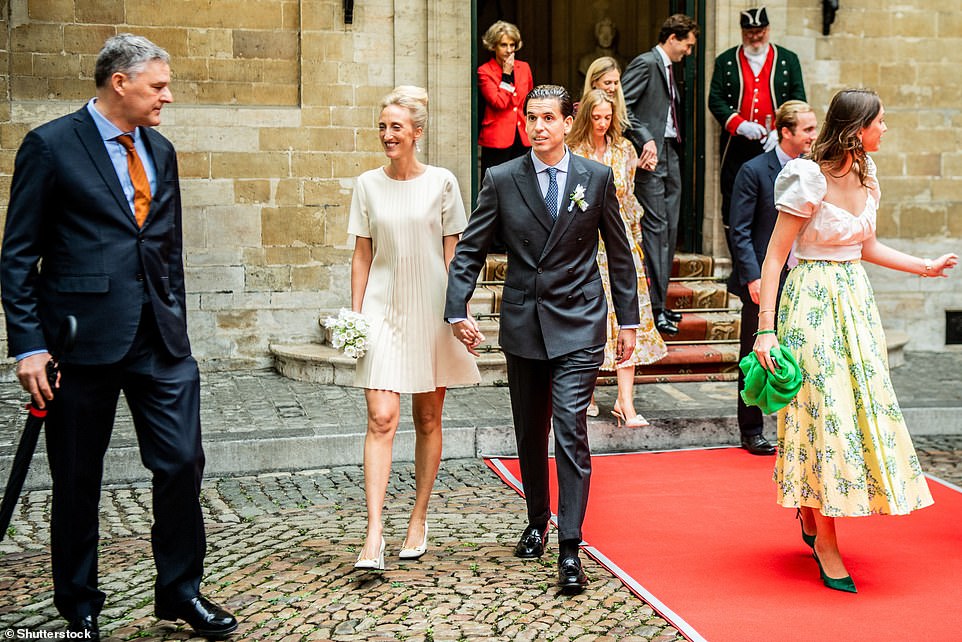 William Isvy was born in Paris to a British mother and an French-Moroccan father but spend most of his childhood in London.

The couple announced they were engaged last December, and shared a series of photographs to mark the occasion.

She sported a black floral dress as she showed off a dazzling diamond and sapphire ring in engagement photos which have been released by the Palace.

Maria was shown resting her hand of her fiancé’s chest as she sported a natural make-up look accessorising with just a pair of small hoop earrings. 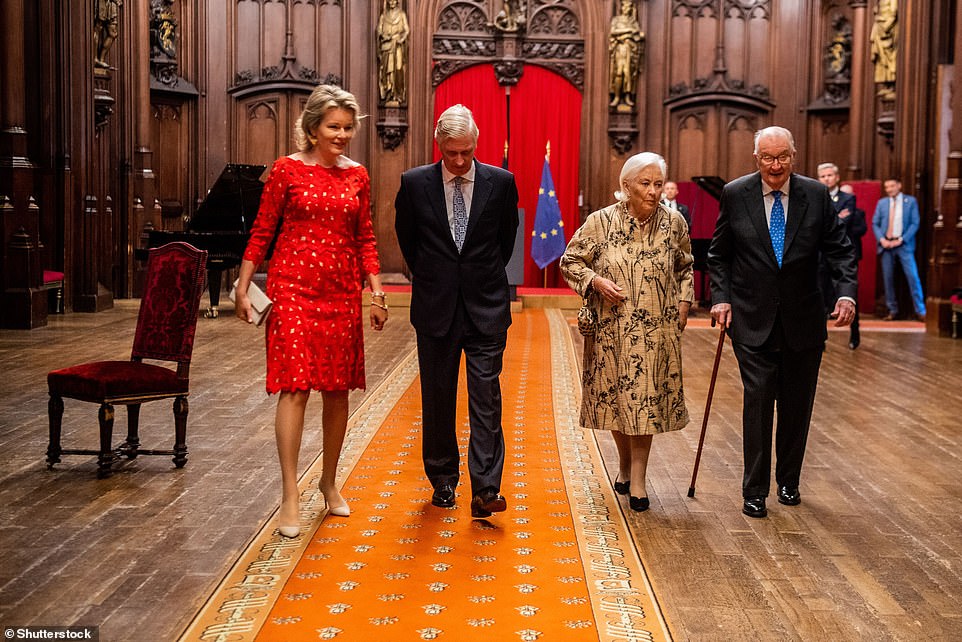 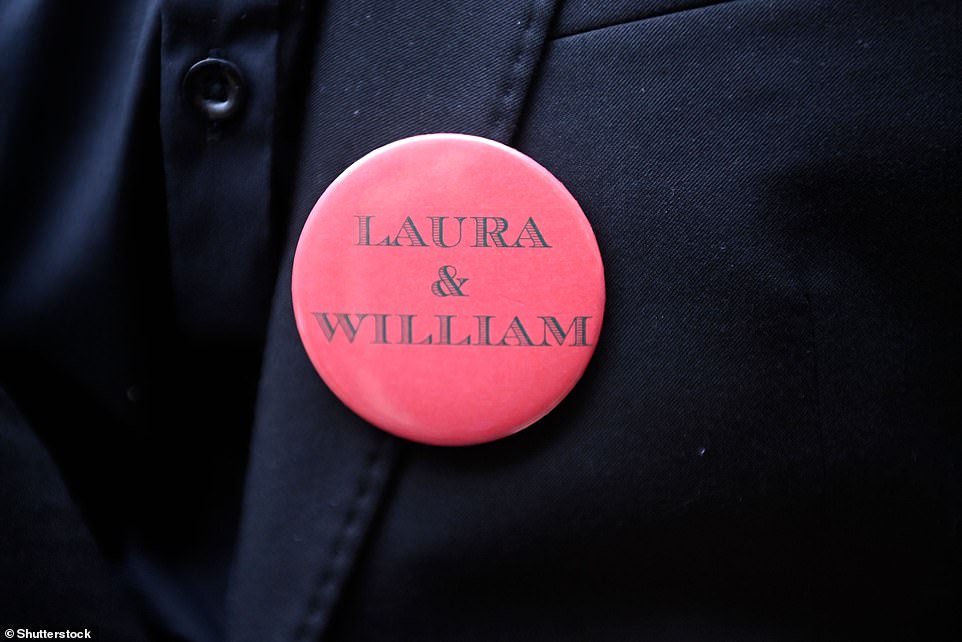 William studied at French Lycée Charles de Gaulle, before heading to McGill University in Montreal to obtain a financial license.

After graduating he worked in mergers and acquisitions for an American investment bank and now works in asset management.

Maria Laura was raised away from the royal spotlight and grew up in Bazel, Switzerland, until the age of five as her father worked for an international bank.

Alongside her siblings – Prince Amedeo, Prince Joachim. Princess Luisa Maria a md Princess Laetitia Maria she was raised away from royal duty and rarely appears at pubic engagements. 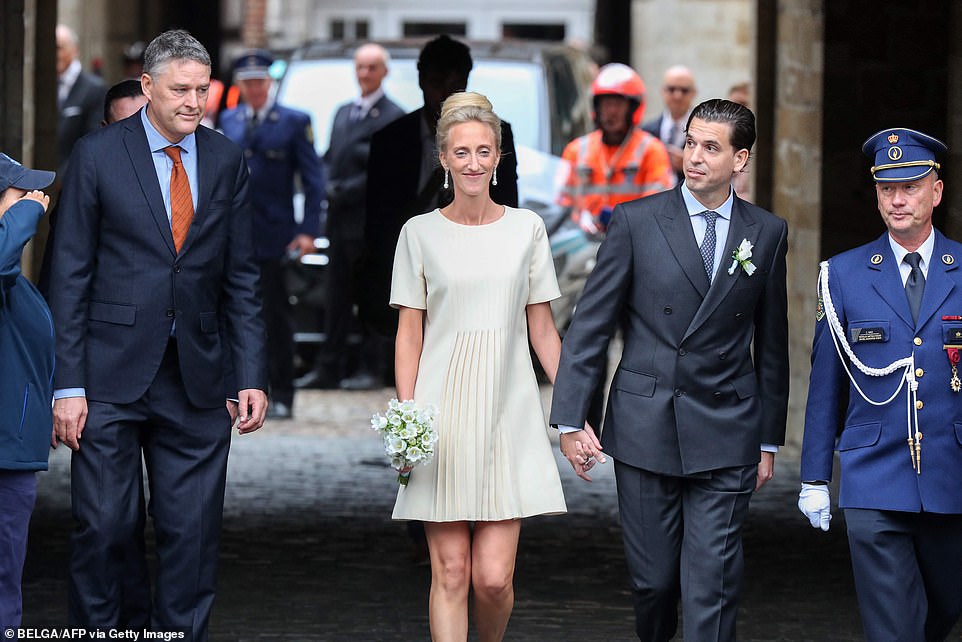 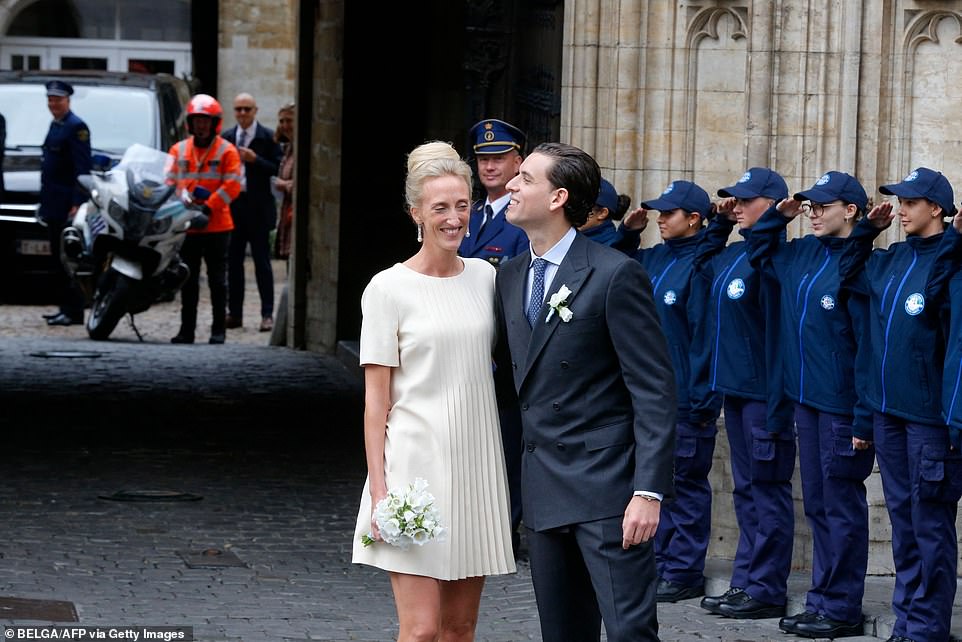 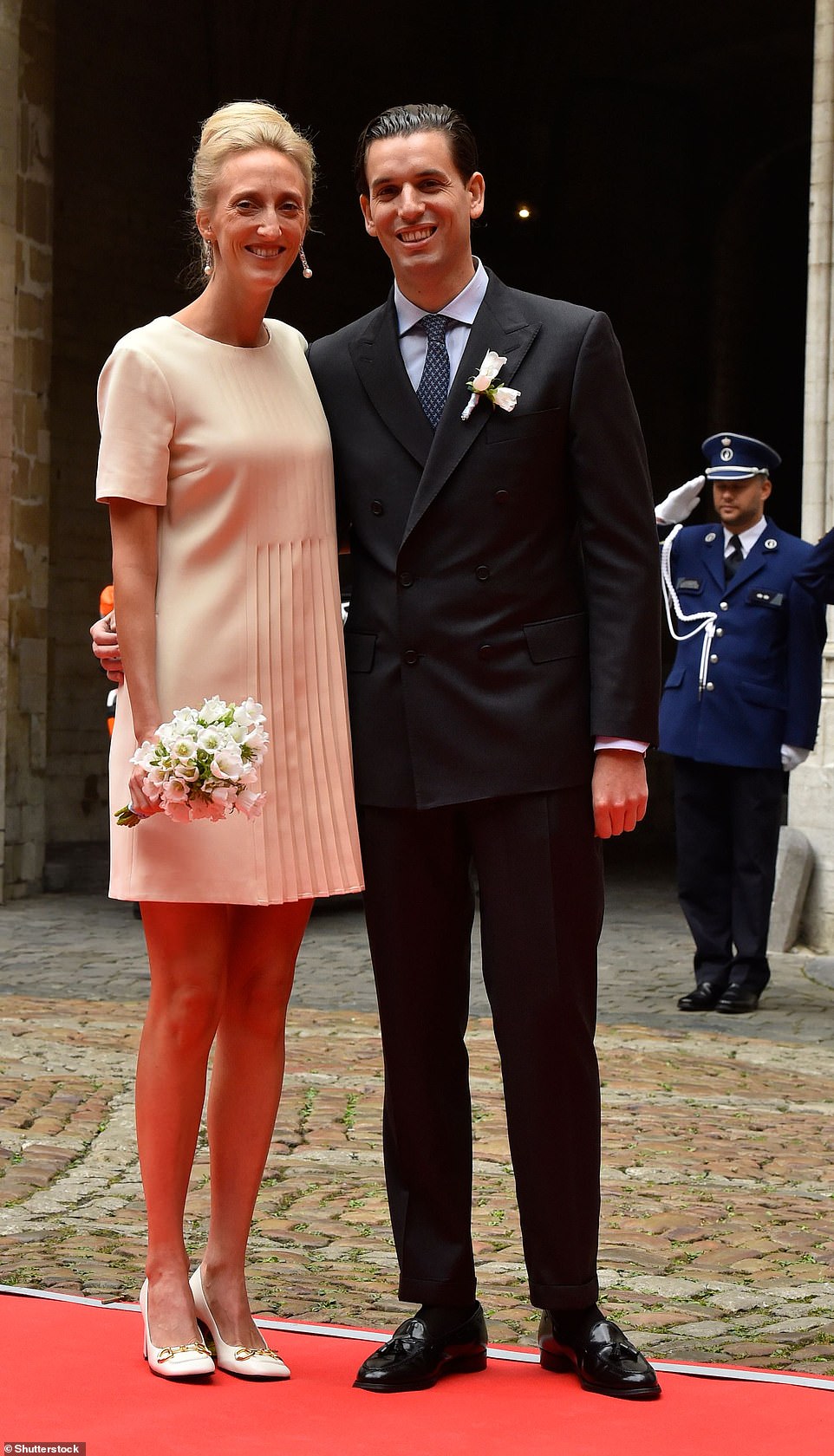 In 1993, her family relocated to Villa Schonenberg, part of the Royal Domain of Laeken. While there, she went to the St. John Berchmans College in Brussels and. John’s International School in Waterloo, Belgium.

After graduating, she went on to do an internship at the UN in New York and worked for Louis Vuitton in Shanghai.

She has been spotted at some official events including the annual mass to commemorate the deceased members of the Belgian Royal Family – and joined her mother on official trips to China.