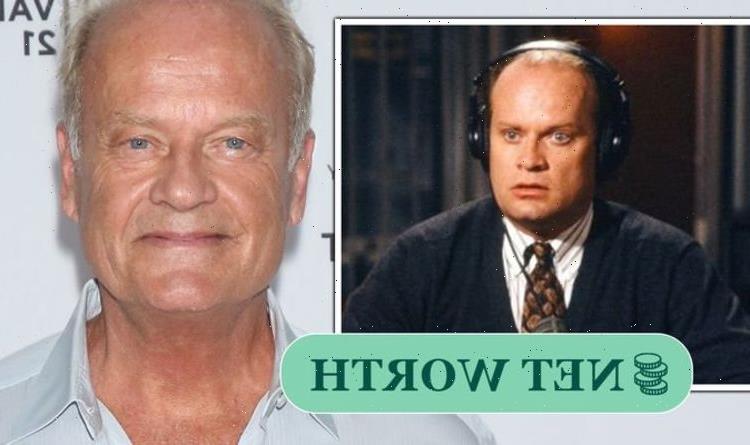 The 66-year-old’s career has spanned over 40 years so far. He is famed for his portrayal of psychiatrist Dr Frasier Crane on the NBC sitcom Cheers and its spin-off Frasier.

According to Celebrity Net Worth, Kelsey Grammer’s net worth is a staggering $80million.

This is equal to around £58.4million.

His illustrious career began in 1981 when he made his Broadway debut as Lennox in Shakespeare’s Macbeth.

Kelsey had been studying at the prestigious Julliard, one of the leading drama, music and dance schools in the world, before a family tragedy struck.

Following his sister’s murder, Kelsey continued to miss classes and was eventually expelled, later taking up an internship at the Old Globe Theatre in San Diego.

He has since been in several Broadway productions over his career, just a few including Othello, Richard II, where he played the titular character, La Cage aux Folles and most recently, Big Fish.

In 1984, Kelsey first appeared as Dr Frasier Crane in the NBC sitcom Cheers, and continued this role until the show’s finale in 1993.

The Cheers’ spinoff Frasier, which aired from 1993 to 2004, made Kelsey his millions.

Celebrity Net Worth reported that at the peak of Frasier, the actor was taking home $1.6 million per episode.

This is equal to around £1.16million.

Phenomenally, Kelsey was racking up an astonishing $38million per season.

This is equal to around £27.7million.

A “record” salary for a TV actor up to that point, Kelsey still stands as the “fifth highest per-episode salary ever earned by an actor”.

He also directed 30 episodes of the sitcom, and sang the closing theme “Tossed Salads and Scrambled Eggs”.

Kelsey is also famous for his portrayal of Bart Simpson’s arch-nemesis Sideshow Bob in The Simpsons.

He provided the voice of Sideshow Bob in 22 episodes between 1989 and 2019, even winning an Emmy Award for his work in the episode “The Italian Bob”.

But despite his millions, he reportedly lost a lot of it in marriages and subsequent divorces.

This is equal to around just under £22million.

Frasier is set to see a revival this year, with Kelsey Grammer returning to the role.