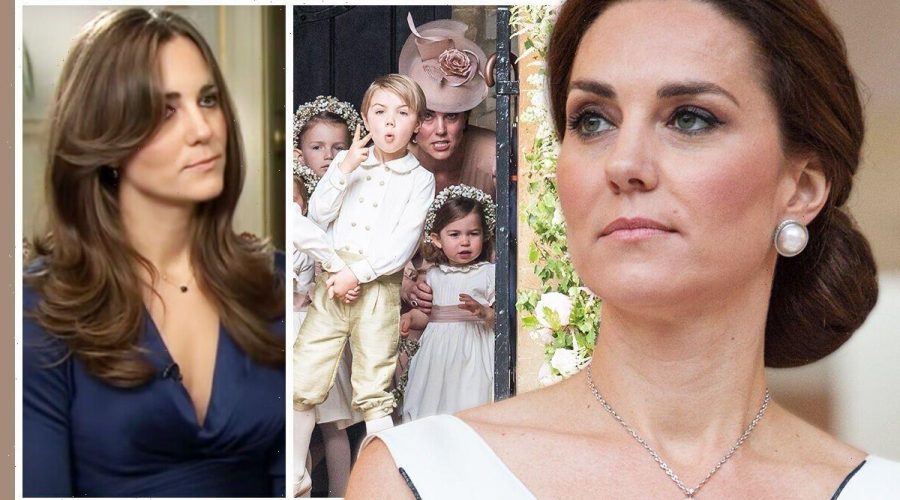 Kate Middleton’s signature big grin typically makes an appearance whenever she does. However, during her time in the royal spotlight, there have been a few occasions where the Duchess of Cambridge looks less than impressed. Judi James spoke exclusively to Express.co.uk about what – and who – frustrates the Duchess.

Kate is known for “breaking into delighted laughter on a frequent basis”, but Judi pinpointed just a few instances where Kate had quite an opposite disposition.

One rare instance of Kate Middleton looking a little unimpressed was in one brief moment during her official engagement interview with Prince William.

“But when the subject of their temporary ‘break’ came up, Kate did look keen to let William and the nation know that, like Queen Victoria, she was ‘not amused’.”

It was so quick you could have missed it, but nevertheless, Kate’s “firm facial expression” was aired, as she gave her husband a “small telling off”.

Her expression was followed with a measured response, where she explained: “At the time I wasn’t very happy about it, but it made me a stronger person.

“You find out things about yourself that you maybe hadn’t realised.”

She continued that because it is easy to get “consumed” in a relationship when you are younger – after all, the pair were still at university – she “valued” that time she spent by herself.

Another instance of a bad mood was at sister Pippa’s wedding in May 2017.

While she was not appointed as a bridesmaid or as maid of honour, so as not to upstage the bride, Kate was in charge of herding in the young bridesmaids and page boys.

Judi observed: “Being given the role of herding and pacifying the small but clearly over-excited group of bridesmaids and pages at her sister Pippa’s wedding must have been testament to her unquestionable skills as the Mary Poppins of the family.

“After all, Pippa was tasked with straightening Kate’s train at her own wedding, so this was a bit of an emotional upgrade and a profile downgrade all in one go.”

Kate started off “calm” and “upbeat” as she entered the church with the little ones in tow, one finger to her lip in a “very beautiful ‘shush’ gesture”.

However, the “sweet calm” did not last, Judi suggested, “and we can see Kate applying some sterner body language rituals as chaos threatened to break out”.

Kate Middleton is synonymous with a smiling face, but the Duchess was far from happy during a 2017 garden party in Poland to celebrate the Queen’s birthday, claimed Judi.

She said: “It’s easy for the cameras to catch an ‘off’ moment that is often just an expression re-set between regal smiles but on this occasion, in Warsaw in 2017, there were a whole series of ‘moments’ of Kate with her pitch-perfect smile vanished from her face and a look of what might actually be called thunder in its place.

And this had an obvious effect on her husband, with Prince William making “complimentary” facial expressions.

According to Judi, he “appeared to be eye-checking his wife several times with a look of concern”.

“His own smile when he turned to perform it, came with a rather reflective eye expression.”

Judi concluded: “A row or just a sombre moment?