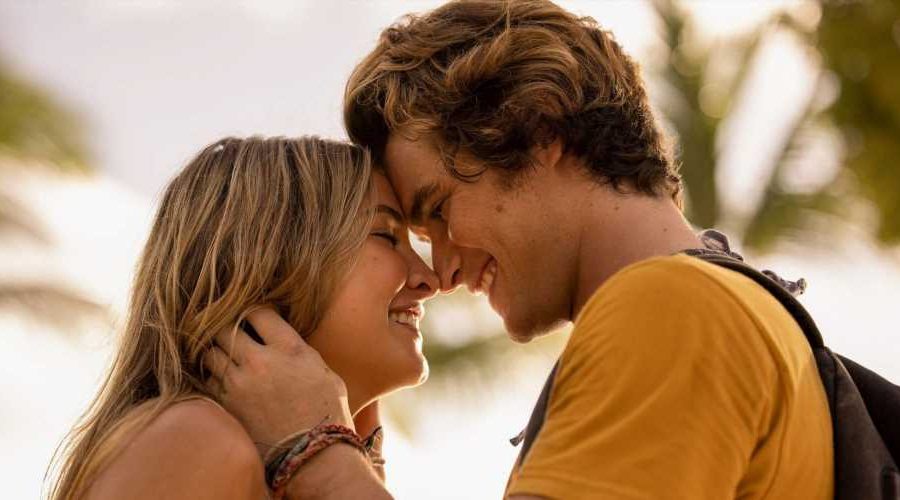 Last year during the COVID-19 lockdown, Netflix's Outer Banks had all the ingredients to help us escape from our own mundane, banana-bread-making, TikTok-watching lives: an exciting treasure-hunting storyline with soap-style drama, easy-to-emulate fashion, and an unbelievably attractive cast. All in all, it was the perfect storm, and Outer Banks became a smash hit, launching its leading players to stardom.

Now, the beloved Pogues (your quintessential 'bad crowd' of teens always clawing their way out of trouble) are back for season two — which premieres on Netflix July 30 — providing us with more of their laid-back, cool-kid style, which resonated with Gen Z-ers and millennials everywhere last summer. This time around, Outer Banks costume designer Emmie Holmes says that she gathered her inspiration from previous fashion eras, playing into the widespread nostalgia sweeping the pop culture world right about now. "I had a conversation with Chase Stokes [who plays John B] in his very first fitting of this season, and we were both finding ourselves really inspired by the early 1990s and, for his character specifically, Kurt Cobain," Holmes tells InStyle. "It was such an inspiring, creative conversation with him that it definitely bled into the rest of the characters for me."

However, the '90s isn't the only decade you'll be able to spot while watching. Hints of the '70s are sprinkled into some of the costumes, particularly in "Pogue princess" Kiara's (Madison Bailey) case — even if, in the end, bell-bottom jeans weren't always the most practical for the stunt-heavy show.

"She was actually going to be even more '70s," Holmes shares. "[There were] a few scenes where we had these amazing, really wide-leg bell bottoms on her, but certain circumstances when you're filming just don't end up working out with what's planned. She had to run, and it was really hot where we were shooting." Even if you weren't an avid fan of the show last year, there's no doubt you saw the impact of the Outer Banks costume department's styling genius. The Hawaiian shirt was undoubtedly the biggest trend to emerge from the show, and it was literally seen everywhere, from social media to your favorite stores and surf shops, and even more recently on celebrities, like Rihanna's errand-running look and in Sophie Turner's Instagram selfie.

While Holmes still utilized the fan-favorite in her costuming this season, ("I feel like it would be a disservice to immediately rip away what everybody loves so much about our lead character," she says) she's also predicting a different breakout trend this year. As season two unfolds, you will see Sarah Cameron (Madelyn Cline) sporting quite a few of her boyfriend's shirts and his now-iconic bandana, paving the way for shared couple clothing. "A lot of pieces were shared between John B and Sarah, and she wore a couple of his shirts in well-thought-out, curated moments that were meaningful [and made] sense for the story," Holmes says. "His classic bandana kind of bleeds into Sarah's world. I really think shared pieces are going to be popular." And the trend of rummaging through your partner's closet is already flawlessly executed by Cline and Stokes IRL — the MTV Movie & TV Awards Best Kiss winners and real-life couple swap clothes all the time. Just ask Holmes, who notes that the two even share one of John B's bandanas that they stole from set. Still, the couple may have to consider returning their treasured bandana because it's now even more valuable than ever. According to Holmes, the original John B bandana has been discontinued, so the cast and crew had to make do this season with the few they have left.

"The 20 that [we had in] season one are still the 20 that we're working with now, which has been incredibly difficult," Holmes tells us.

"That is like the costume department's version of the gold," she adds with a laugh. "Those are precious, and we protect them with everything we have." In addition to interchangeable couple pieces, Holmes also anticipates little personalized accessories, like sew-on patches and doodled sneakers, will begin to rise in popularity as a result of the show — two more costume characteristics that are testaments to the pro's unmatched attention to detail.

If you recall, season one drops John B and Sarah in the middle of the ocean, just barely surviving a ravaging storm and tumultuous waves before reaching safety aboard a cargo ship on it's way to Nassau, Bahamas (convenient for them, considering that's where the gold was headed). Holmes took the kids' probable boredom into consideration and added little doodles to John B's Converse, which she believes the two would have drawn to "pass the time." In addition to the dwindling bandana collection, another challenge Holmes faced this season was creating school-appropriate and fall weather-conducive looks. Season one saw the Pogues in the middle of summer in the midst of an island-wide power outage post Hurricane Agatha, so their costumes mostly consisted of swimwear, shorts, and Hawaiian shirts. Holmes parallels the seasonal transition of the character's costumes to our real lives as we begin to return to society.

"It's a little bit symbolic — life is back, for all of us," she says. "I injected a lot more color to really kind of symbolize that we're getting powered back on and school's in session. I hope that resonates because we had a lot more fun with them heading back into school, [layering] up, [using] more color, more playful accessories, and more patterns." While it's still unclear if the show will be renewed for a third season (fingers crossed), this upcoming one ends on yet another cliff hanger — which is pretty much the show's forte and recipe for success, given that each individual episode ends in suspense, making it virtually impossible to resist binging all the way through. The good new is, Outer Banks indeed left the door open for another dose of compelling, adventurous plot lines with the Pogues — and yes, even more challenges for the costume department.

But considering how close Holmes says the cast and crew are off screen — they're actual P4L (Pogues for life) — it sounds like the group wouldn't hesitate to sign on for another season.

"I think it makes a really great show because it's just so easy," Holmes affectionately says of the cast and crew's family-like bond. "Everything is so highly coordinated and discussed, but honestly, at the end of the day, it's just like a bunch of friends and family exchanging ideas and getting excited about making something together."