Jerry Ohlinger, the quirky proprietor of a cluttered Manhattan shop that has for decades been a mandatory stop for collectors of “Star Wars” posters, photos of Greta Garbo and all sorts of other movie memorabilia, died on Nov. 10 in Manhattan. He was 75.

The cause was pancreatic cancer, said Bill Marlborough, a longtime employee.

Jerry Ohlinger’s Movie Material Store is said to be New York’s last film memorabilia shop of a certain type: an overstuffed place where customers can come and talk cinema but might need help finding what they’re after. There used to be others — Cinemabilia and the Memory Shop, for instance — but with much of the collectibles trade moving online, one after another closed. Mr. Ohlinger hung on, downsizing several times, most recently to the current location, upstairs at 216 West 30th Street.

Over the years he accumulated a vast collection of memorabilia, much of it warehoused. At the end of his life he was embroiled in a lengthy legal dispute over that collection with a New Jersey couple, Sean Chatoff and Xingling Hu, with whom he had struck an agreement involving storage of and sales from the collection.

The most recent ruling in that dispute, which has been playing out in courts in New Jersey and New York, was just a few weeks ago, and the fate of the collection remains unclear.

Mr. Ohlinger’s interest in collecting began early, fueled by trips with his father to the movie houses on Broadway and 42nd Street. He started rather primitively, clipping pictures out of magazines.

“I never saw a real photo from a motion picture until I was 10 years old,” he told The New Yorker in 2013. The first movie still he purchased — for 10 cents — was from “The Three Caballeros,” Disney’s animated 1944 feature. 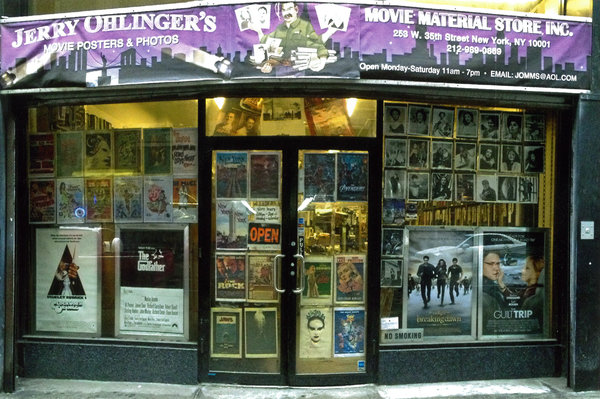 Mr. Marlborough said Mr. Ohlinger was trained as an accountant and went to work as a bookkeeper for 20th Century Fox in New York. That’s when his childhood passion took a more serious turn.

At Fox, Mr. Marlborough said, “he found that people threw away a lot of things, so he picked them out of the garbage and started his own collection.”

He eventually began taking his wares on the road.

“I used to go to a lot of the comic book conventions, which was where I really started to sell stuff,” he told the website The Culture Trip. “That was about 1970. Usually I was the only person selling movie memorabilia. I discovered that people who like comics like movies, too.”

Mr. Ohlinger opened his first store in 1977, on West Third Street. That was the year that the release of one particular movie altered the collecting landscape: “Star Wars.”

“That changed the business dramatically,” Mr. Ohlinger said. “People who weren’t normally interested in collecting movie posters or photos suddenly wanted something on this title. It was a phenomenon, and it led to a great increase in business.”

In the mid-1980s he moved to a bigger space on West 14th Street. Business was booming.

“I guess we had a good reputation because we were open seven days a week and were very busy,” he said. “On Saturdays we could have as many as 8 to 15 people in the store at one time, and on Sundays only a few less. We would need three people at the counter back then.”

Mr. Ohlinger was a particular fan of movie stills, and had hundreds of thousands of them.

“You can really see details that you don’t see in the film, because the film doesn’t pause for you,” he explained to The New Yorker. Also, he said, most such images were taken not during filming (because of concern about shutter noise), but during rehearsals, so they often caught a unique moment slightly different from what filmgoers saw.

The man was just as quirky as the store.

“I loved him dearly because of and despite all of his peculiarities,” Dollie Banner, a longtime employee, said by email. “Your quintessential New York proprietor, but also a singular one-of-a-kind character. Thrifty to an absurd degree, cigar dangling or left perched somewhere catching you unawares. The high-pitched voice and even higher laugh. Most gleeful when he could buy something cheaply and sell it for a top price, even if he had to wait decades to do so.”

By the 1990s the combination of higher rents and competition from online traders was putting pressure on Mr. Ohlinger. He tried to adapt by getting into online sales himself, but kept the store open too. After the building that housed it changed hands and he was faced with a near doubling of his rent, he moved to West 35th Street in 2004. By 2014 that space had also become too expensive, and a spate of articles reported that the store would be closing.

“I think a lot of customers came to spend some time talking to Jerry and not just to obtain their particular piece of movie memorabilia,” she said. “His knowledge of movie paper was spectacular, covering all kinds of distribution and printing anomalies, multiple rereleases, etc. His taste in movies was random, very subjective, but he found value in every title, no matter the quality.”

Among his many fans was Sam Sarowitz, who owns a very different type of movie memorabilia business, Posteritati, in SoHo, where items are displayed gallery-style and customers search using a database.

“It’s not quite the get-your-hands-dirty feeling and discovering something at the bottom of a box,” Mr. Sarowitz said in a telephone interview. As for the more madcap retail style of Ohlinger’s, he said, “There was definitely a charm to that model.”

Mr. Ohlinger said customers were generally interested in a particular star or movie or genre. He collected the whole range of them, he said, but he had no favorites.

“They’re all my children,” he said.