Given his famous friendship with Jimmy Fallon, it was inevitable Justin Timberlake would stop by The Tonight Show to promote his new book, Hindsight. Despite suffering bruised vocal chords (and having to postpone three of his concerts), the pop superstar did just that Thursday.

Since he’s on vocal rest, Timberlake’s wife, Jessica Biel, joined him on the show and faced Fallon in a “Best Friends Challenge.” Similar to The Newlywed Game, Timberlake would ask them a question about himself. After writing down their answers, he’d see if they aligned with his own.

“Who is my all-time favorite rapper?” a nonverbal Timberlake asked, noting there were two answers. Biel guessed Andre 3000 and MA$E, while Fallon (randomly) picked a trio: Run DMC. Biel was right and teased Fallon, saying, “Of course I know it! Jimmy, why don’t you know that?”

The next question should have been a softball: “What is my go-to cocktail?”

Once again, Biel came out on top, correctly guessing his drink of choice. “What is going on?” Fallon asked. “What’s a tequila mule? Gin and tonics! We drink gin and tonics! That’s what we drink! You don’t like it? You don’t like what I do for you? The beverages we make and have—that’s not fun for you?” To calm him down, Biel said, “I think it is fun; it’s just not the most fun.” 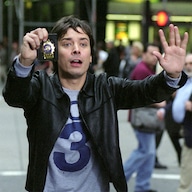 Timberlake’s third question was a little more personal: “What is my safe word?”

To everyone’s surprise, Biel and Fallon both correctly guessed the safe word was “pineapple.”

“How the heck did that just happen?” Fallon wondered. “That is so bizarre, dude!”

Before he grabbed Biel and Fallon’s hands, Timberlake mouthed, “Things just got weird…”

The fourth question was a doozy: “What number am I thinking of between 1 and 5,000?” And wouldn’t you know it? Fallon accurately guessed 4,297. It’s almost as if they planned that one…

Later, as Timberlake was leaving, Fallon said, “That got weird. I hope Jess isn’t really mad. Here’s some chicken noodle soup. Feel better. I’ll see you back at home.” That’s when Biel met them at the elevator bank, and without saying a word, punched Fallon in the face. As she and her husband made their way downstairs, the winded late-night host repeated his pal’s safe word.

(E! and NBC are both members of the NBCUniversal family.)