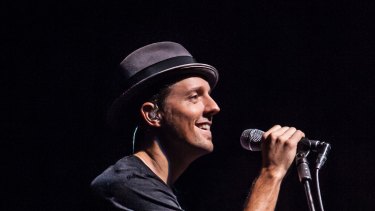 Jason Mraz of ‘I’m Yours’ fame will perform shows with James Blunt, of ‘You’re Beautiful’ fame, in Australia next year.

Somewhere on the way to 10 million downloads and 2 billion streams, Jason Mraz's 2008 single I'm Yours took on such a life of its own that Mraz has to pretend he didn't write it.

‘‘I treat it like I'm doing a cover when I perform I'm Yours,’’ says the 42-year-old from Mechanicsville, Virginia, ahead of his first shows in Australia since 2014.

‘‘I have to honour it and do the best possible cover of it that I can, so that it lives up to the expectations of those people who've made it their song.’’

The reggae-lite, partly scatted ode to ‘‘our godforsaken right to be loved’’ only took Mraz 45 minutes to write in a career that started in San Diego coffee shops and has spawned seven albums, two Grammy Awards and a foundation that has donated more than $1 million to arts education.

However, he accepts it's the thing most people will remember him by – unlike Elton John who, in his recent autobiography, complained that transcendent hits like Your Song  literally weren't his anymore and crowded out material he thought was as good or better from the public's perception of him.

Mraz has no such qualms about I'm Yours becoming a staple of ukulele groups and karaoke nights, nor one of his three tunes to make Spotify's current list of the 50 most popular wedding songs (only Bruno Mars, with four, beats him).

‘‘Without I'm Yours or Lucky or I Won't Give Up, I wouldn't have a public perception at all. I'm grateful they've reached people beyond the Jason Mraz fans,’’ he says, referencing his other two nuptials perennials.

‘‘They keep me on stage and that's where I want to be, with music moving me gracefully through life.’’

I write positive music as the antithesis to the darkness I see in the world.

They have also kept Mraz in an unlikely sideline for a pop star, growing avocados and coffee beans on a 10-acre commercial family farm at Oceanside, between Los Angeles and San Diego.

After four years in agribusiness, Mraz admits his music is still subsidising the farm, but says that in return it has taught him how to be a better musician.

‘‘The seasons in farming are the same as a touring and recording artist can unravel in their life,’’ he says.

‘‘In winter you hibernate, you dream. In spring you lay out a bunch of seeds, or rough drafts – you see what's looking good – and in summer you cultivate them, pulling it together in the studio and publishing. Then in the fall you take them to market, and hope to be repaid for your time in the field.

‘‘I've learned a lot about long-term planning, preparation and rest.’’

Mraz plans to have new music released by the time he reaches Australia, but don't expect a change in the sunny demeanour that has characterised his output to date.

Recorded with his all-female backing band Raining Jane, and expanding his sound palette with lapsteel guitar and sitar, the new record responds to Trump's America, he says, in a manner befitting a wedding song: with an outpouring of love.

‘‘I write positive music as the antithesis to the darkness I see in the world,’’ he says.

‘‘How do we heal the toxicity that's been exposed in the US over the last four years? With compassion, generosity, forgiveness. I'll always use positive music to encourage those things.’’

12/08/2019 lifestyle Comments Off on Jason Mraz is cool that ‘I’m Yours’ is no longer his
Recent Posts
We and our partners use cookies on this site to improve our service, perform analytics, personalize advertising, measure advertising performance, and remember website preferences.Ok