Saucy calendar that stripped me of my naked prejudice: JAN MOIR says her opinion of nude photoshoots was dramatically changed by one brave group of bereaved mothers

Voluntary public nudity is a strange phenomenon. Its keenest devotees always seem to be those who are most familiar with the thousands of natural shocks to which the flesh is heir, rather than ravishing Botticelli beauties or admirable beefcakers.

Take naturists, for example, who are almost always grizzled ancients with purple sprouting knick-knackery bursting out of the most unlikely places. Or perhaps some misshapen ol’ tufty, shuffling about like a half-finished project from the Build-A-Bear workshop. And the men are just as bad.

Then we have nude charity calendars. Oh God, are they still a thing? I’m afraid they are. The going-naked-for-charity craze began with the Rylstone and District branch of the Women’s Institute in 2000 and went on to conquer the country — but why? 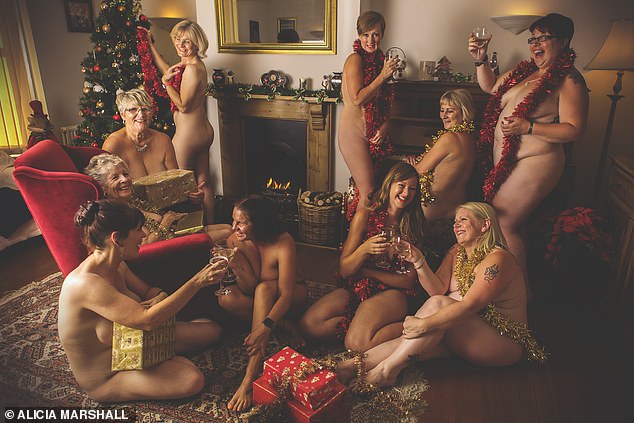 The going-naked-for-charity craze began with the Rylstone and District branch of the Women’s Institute in 2000 and went on to conquer the country — but why?

However, the truth is that given the opportunity to de-breek or de-bra for a good cause, thousands upon thousands of Brits will whip off their pants quicker than Sergeant Wilson could say: ‘Do you really think that’s wise?’

Every year rugby players get their kit off, along with firemen, knitting circles, university students, nurses, butchers, rowers, EastEnders actresses, you name it. While they all raise money for good causes, only some calendars are tasteful and well received. Others less so.

Six years ago, a ladies’ rugby club from Birmingham published one of the worst ever, showing them posing on pool tables and across sofas in a dingy local pub. It looked like the record of a crime scene, rather than a celebration of life and the female form. 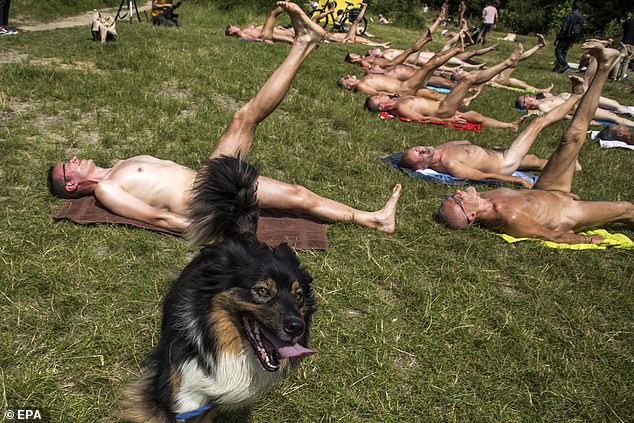 Voluntary public nudity is a strange phenomenon. Its keenest devotees always seem to be those who are most familiar with the thousands of natural shocks to which the flesh is heir

Yet each autumn we must once more prepare ourselves for another onslaught of goose-pimped calendar nudity. We must get ready for the doughy yeoman buttocks and sun-starved thighs of do-gooders across the land as unimaginative societies strip off for charity.

They mean well, of course, although I sometimes think it is much more fun for the exhibitionist participants than those of us who have to shell out for their chosen good cause. Indeed, sometimes I think they should be stopped altogether. Ban this strip filth!

However, this year something special changed my mind. For 2019, there is at least one glorious exception in the field — The Strong Soham Mums Calendar. This incredible publication, unveiled in the Mail yesterday, features cheeky snaps of 12 mothers who have a terrible common bond — they have each lost a child.

The bereaved women live in the Cambridgeshire town of Soham — home of Holly Wells and Jessica Chapman, the ten-year-olds murdered by school caretaker Ian Huntley in 2002. Remarkably, Holly’s mother Nicola, 51, is one of the women who posed for the calendar. She wanted to send a message to other mothers — that even though you never get over losing a child, you don’t have to turn your face to the wall for ever. 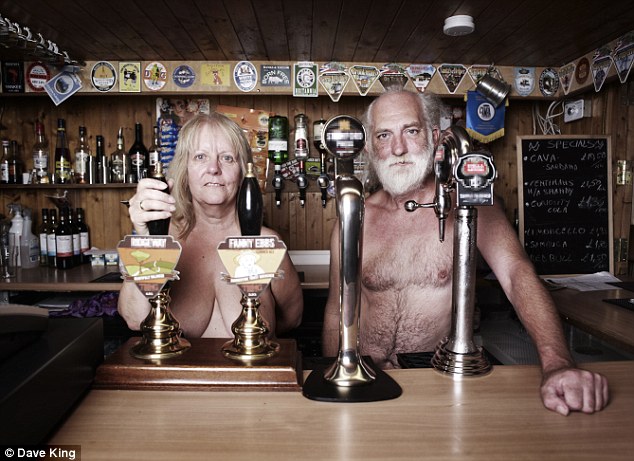 ‘It’s all right to have a laugh,’ she said. She is pictured naked (ish!) with her sister Lesley, 57, who was a huge support during the hunt for Holly, and the terrible years that came after. Now, by a gruesome twist of fate, Lesley is a bereaved mother herself.

On Christmas Eve in 2012, her son Thomas, then 23, suffered a fatal head injury while driving home to see his family for the holidays. He died on Christmas Day.

It seems unimaginably cruel that one family should have suffered not one but two of every parent’s worst nightmares. And one set of grandparents had to see two of their grandchildren die in such horrendous circumstances.

Every mother here has a heart-breaking tale to tell, even though they do not dwell on their sorrow. Among their lost loved ones are children who died of cancer, a rare immune condition, a motorbike accident, a brain seizure, at the hands of a drunk driver, the victim of a freak accident. The mothers don’t think Soham, with its population of 10,000, has an unusually high child death rate, only that theirs is a close community where everyone knows each other. And for once, in nude calendar land, that is a message really worth hearing. And seeing.

It is inspiring that these poor, blighted, bereaved mums have found comfort and strength in the company of each other. Some might think it weird to commemorate their wretched connection by posing for a nude charity calendar. And to be honest, it is a tiny bit odd, even if the proceeds are going to the Road Victims Trust and Addenbrooke’s Charitable Trust.

But it is also an inspiring show of strength, a small victory in the war of loss that the bereaved cannot ever win. There is a rare courage in these photographs of ordinary women, somehow coping with the worst life could throw at them, and still managing a smile.

One festive group shot, with the bravest calendar girls draped in strategically placed tinsel, says more than words about the indomitability of the human spirit.

It also shows other suffering mothers that there is life after losing a child. Even though that life may be different and bereft, and often filled with bouts of overwhelming sadness, it is still a life worth living.

And for once, in nude calendar land, that is a message really worth hearing. And seeing. 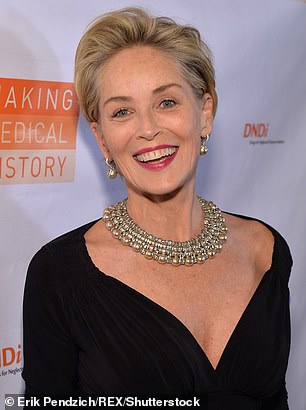 Isn’t it time to drop a deep curtsey and pay homage to Sharon Stone?

Isn’t it time to drop a deep curtsey and pay homage to Sharon Stone?

How does this ageless goddess do it?

The 60-year-old turned up looking fabulous at Halloween time; a master-class in Hollywood chic.

Most of all, I love the expression she wears, one that seems to say: ‘Can you freakin’ believe how fabulous I am?’ Frankly, no.

In his autobiography, Rupert Everett called her the kind of old-school diva who is as ‘hard as nails and utterly unhinged’. What a fabulous compliment. 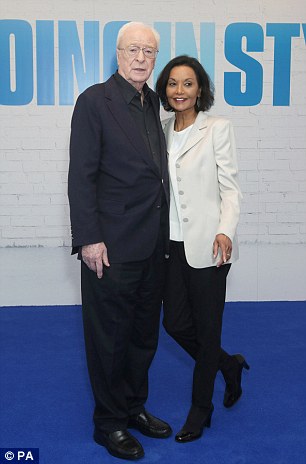 Michael Caine has always taken his wife Shakira (seen with the actor in 2017) on film shoots, in case he is tempted to have an affair

Throughout his career, Michael Caine has always taken his wife Shakira on film shoots, in case he is tempted to have an affair.

If you put a bunch of wildly attractive people alone together on a far-flung location, the inevitable will often happen.

Look at Rachel Weisz and Daniel Craig, both in long-term relationships when they met on set in snowy Ontario, but that’s enough of my private pain.

Michael’s strategy makes sense, but only if you have a spouse whose existence is entirely subordinate to yours and doesn’t mind trotting along, being the dull half-boiled egg while you bring home the bacon.

He is 85 now, and has been married to Shakira for 45 years. What is amazing is that there has never been a Caine mutiny. 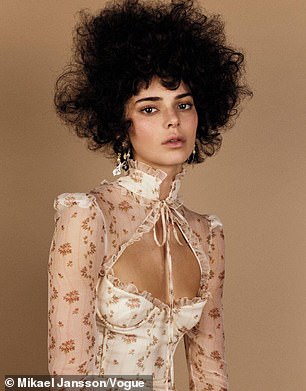 American Vogue has been accused of cultural appropriation after styling the model Kendall Jenner with a tousled mop of hair.

Black activists have accused the magazine of copying afros and not ‘using actual black models’.

I don’t know where this leaves Edward Scissorhands, Brian May or Helena Bonham Carter, but it’s not in a good place.

Vogue apologised but said the look was, in fact, meant to be an update of sketches of ‘the Gibson girl’, an embodiment of the Edwardian feminine ideal.

So why on earth did they say sorry?

No delight at Debs

First House of Fraser collapsed in August, and now Debenhams is on the brink. The High Street giant is understood to be considering closing 50 of its 166 stores in a radical overhaul to cope with record £500 million losses.

Crippling business rates and the threat from online giants such as Amazon are taking their toll on these mid-market stores. And while I sympathise with their plight — and that of their employees — it’s not hard to see why they are in such trouble. What are these old-fashioned, out-of-touch department stores for any more? 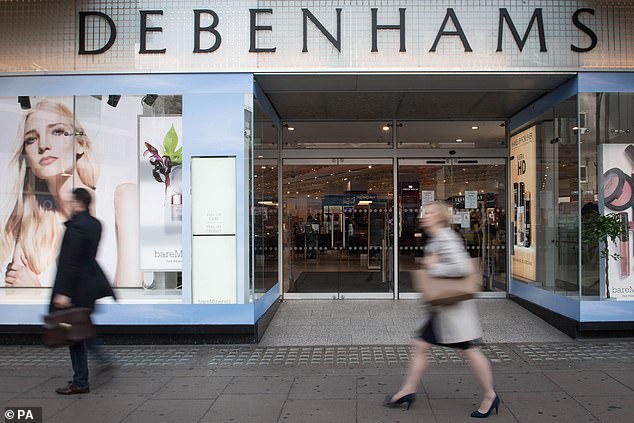 They don’t make any commercial sense, they don’t fit any consumer profile and they are difficult to navigate for busy shoppers.

They have become mausoleums that customers walk past en route to Zara or Primark or Footlocker.

Huge emporiums which sell only a select few items from large ranges — and which don’t have an identity of their own, unlike John Lewis, Selfridges or Harrods —don’t fit the needs of today’s precision-honed savvy shoppers.

From niche brand to big-name bargain, people know exactly what they want.

And that they are not going to find it in Debenhams.

Somalia-born Hana Abdi Qahtan applied for UK asylum in 2006. She became a British citizen in 2013, and also got passports for her mother and her children. This week she was spared jail after being caught red-handed using two of these passports to bring distant relatives into Britain. 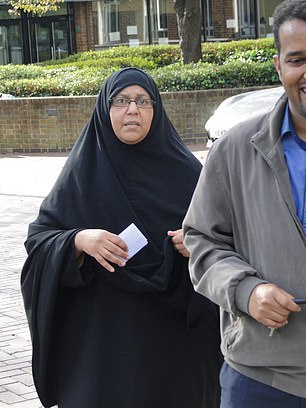 Somalia-born Hana Abdi Qahtan applied for UK asylum in 2006. She became a British citizen in 2013

The judge in West London said that her acts were humanitarian rather than bad, and Hana was given community service instead. The two relatives she tried to smuggle in on bogus passports have now received full asylum.

Despite living here for a dozen years, Hana still needed an Arabic translator in court. She cannot work much and receives NHS care for sciatica and depression.

Still, that didn’t stop her from travelling halfway around the world to smuggle two people she had never met into a country that had been so kind to her.

What kind of message does that send to others who might be tempted to smuggle in relatives to be cared for by our creaking public services?