‘Am I really watching Phillip Schofield making a unicorn poo?’ How To Spend It Well At Christmas viewers are left in stitches at the sight of the This Morning host trying to make £49.99 toy ‘s*** glitter’

Phillip Schofield’s day job on This Morning may throw up some weird and wonderful scenarios…but making a unicorn poo out shimmer slime might take the Christmas biscuit.

In the latest episode of ITV’s How to spend it well at Christmas, the 56-year-old explored the toys topping youngsters’ yuletide wish-lists, with the £49.99 Poopsie Slime Surprise Unicorn already a best-seller.

With a festive tree behind him, Phillip set about ‘feeding’ the plastic unicorn with a little gold spoon, shovelling in ‘unicorn food’, glitter and water. 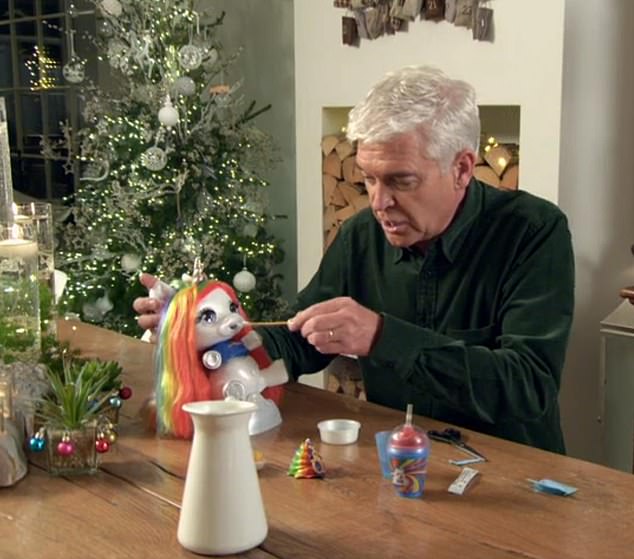 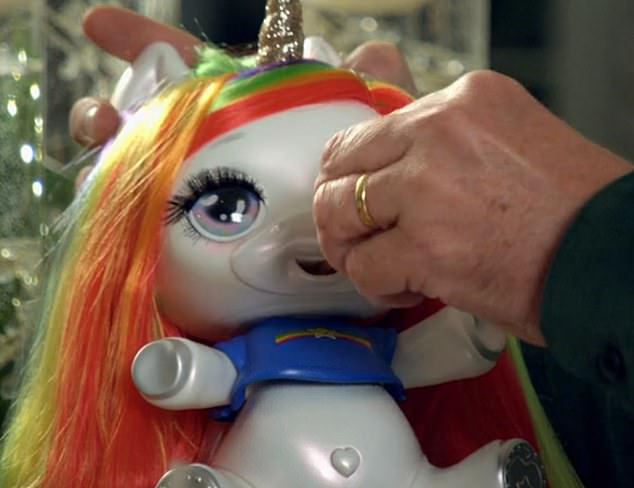 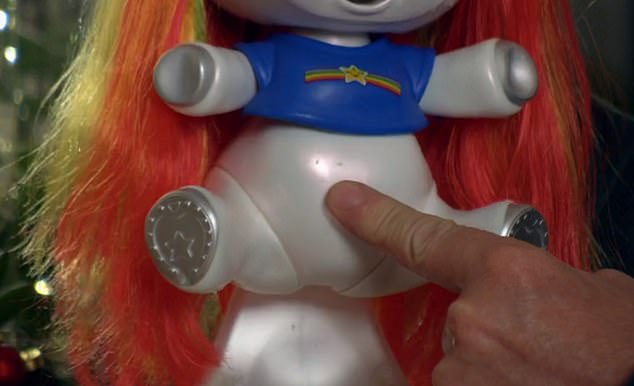 Here goes…after the unicorn has enjoyed a lunch of glitter, water and unicorn food, Schofield prepares to push the button on its bowels… 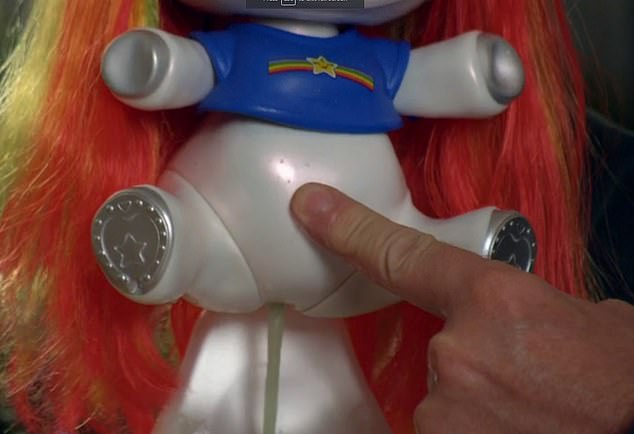 You might want to see a doctor! Green, glittering liquid pours from the Poopsie Slime Surprise Unicorn, which retails at £49.99 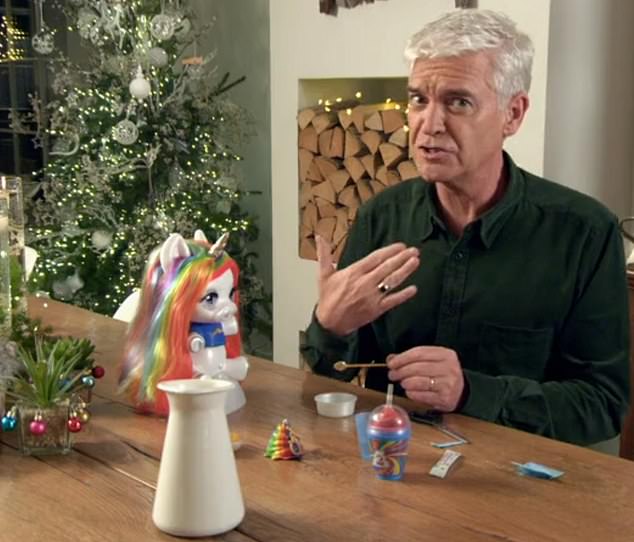 The sight of the daytime telly host playing with the toy was too much for some viewers, while others declared it the ‘best of British telly’.

Twitter became momentarily fixated with the idea of a unicorn passing the glittery bowel movement, with hundreds posting their amusement.

@fransbeautyblog called it: ‘The weirdest thing I’ve ever watched on TV’.

@DansGall added her surprise, saying: ‘Watching @Schofe first feed a unicorn shimmer dust saying ‘you’ve got to tip her right back and ram it in’ then watch him make it poop out slime is not how I expected to spend my evening.’ 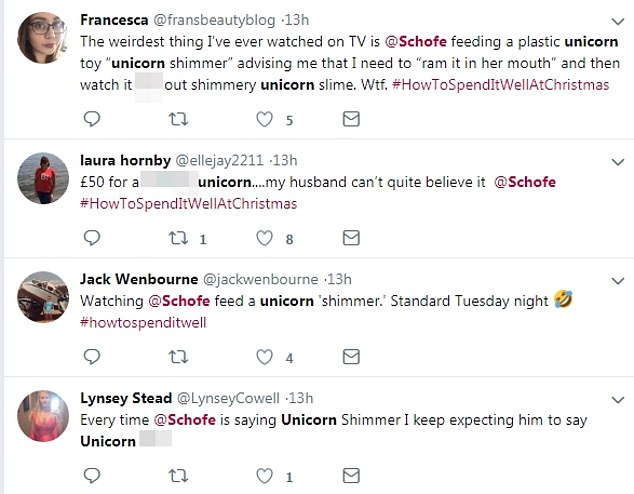 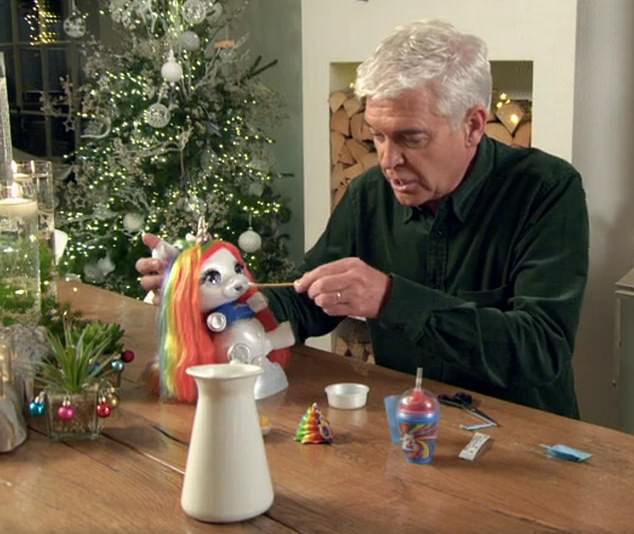 Come on, eat up! Another viewer tweeted: ‘Is this happening? Never thought I’d see @Schofe feeding a toy baby unicorn.’ 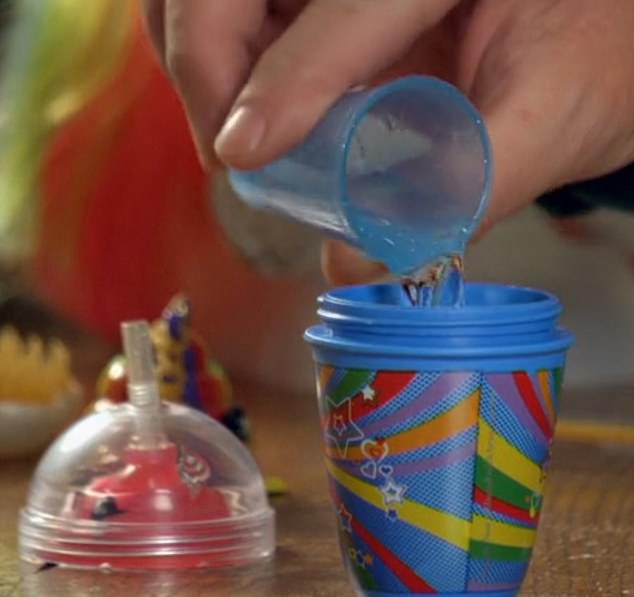 The meal for the toy, which clearly capitalises on the current love for all things unicorn, includes water, glitter and a special food which, when mixed, comes out as slime 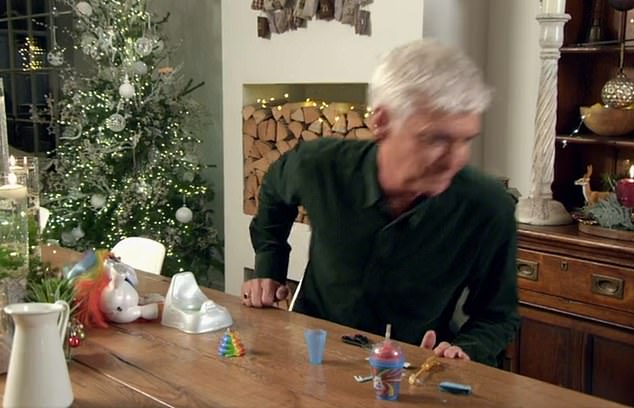 He’s had enough! The presenter declares the toy a retail hit, but says he wouldn’t buy it

The bizarre ending to the hour-long show saw Schofield give the toy a big thumbs’ down, saying he would ‘forget it’ considering the £50 price tag.

He did add though that he expected the toy would be hugely appealing to youngsters.

The ITV show saw the presenter taking a closer look at some of this year’s hottest toys for Christmas, with a little help from actress Sally Phillips and her three sons.

The comedy star and her boys tried out the nerf guns, which retail at £49.99 and are aimed at ages eight and up, declaring them a huge hit.

Time for a letter to Santa! John Lewis’ picks of toys this Christmas