Life is more stressful for women. According to a recent report from the Physiological Society in the UK, women find life markedly more nerve-racking than men. From breakups to child-rearing to retirement, it's tougher being female – and not just because of those endlessly long loo queues! And now, of course, I've just added to your stress by making you feel stressed about how stressed you are! Oops!

The report found that women are 13 per cent more anxious than men about everything, including money, moving house, health, parenting issues, wedding planning, the death of a partner and terrorism. 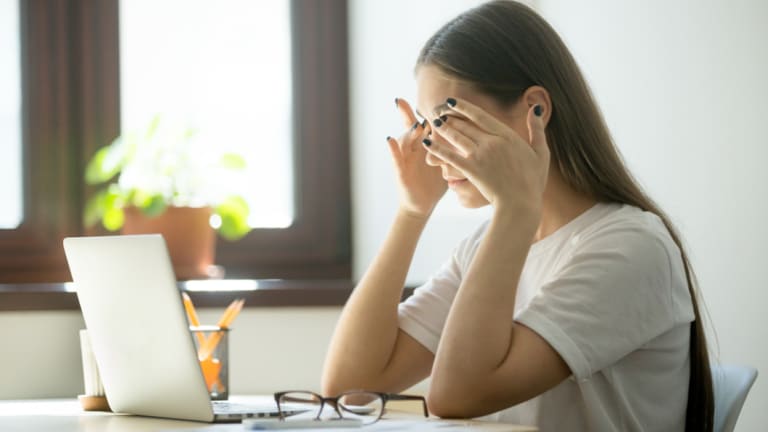 The report found that women are 13 per cent more anxious than men about everything.Credit:Shutterstock

A quick poll with my female friends revealed that it's the minutiae of daily anxieties that grind women down the most. Like, not getting enough help around the house. Yep. The biggest bedroom fantasy of most women involves hubbies picking their undies off the floor.

Forgetting it's your birthday or anniversary is also grounds for divorce, according to my gal pals. As is being promised a "fly and flop" beachside resort holiday, only to then be told that you're going camping.

A couple of nights under canvas and you'll soon discover that you have so much in common … namely, mutual contempt and acrimony. And fighting in a tent is so frustrating. It's just not as dramatic, storming out … and slamming the flap.

The sat-nav imploding also rates high on the stress-ometer, because men would rather die than ask directions. Even after you've spent what seems like an entire week on one seven-lane, sub-orbital ring road and everyone in the car has started to resemble a passenger on The Raft of the Medusa.

But there are ways to help alleviate some of the stress we endure. My first top tip is to throw out your bathroom scales. It's taken a lot of self-control and determination, but I've even managed to give up dieting. Sure, mirrors don't lie, but they can be shattered with that stiletto your teenage daughter says you're way too old to wear.

Second, stop feeling inferior to those superwomen who juggle kids and careers without dropping anything. I bet in real life they're joyless and juiceless. "Not tonight dear, I'm Having It All in the morning."

Also steer clear of articles berating you to revive your sex life by "using more imagination in bed", a request to which most wives would scoffingly reply, "Oh, you mean imagine that it's good?"

It also helps to turn your negatives into a positive. You've left your passport in the hotel safe? Great. Just have a longer holiday. You've dyed a load of washing red? Simply join the Socialist Party.

Of course, the real secret to a happy, stress-free life is to have limbo-low expectations. Let's face it, if you were happy every day of your life you'd be a breakfast-TV weather presenter. The trick is to find happiness in small things: a parking spot right outside; six green lights in a row; an early daffodil; a baby sleeping through the night; multiple orgasms; searching all over the house for your glasses, then realising that they're on your head …

And we need to learn to be happier because psychiatrists have measured the impact of different stressful events on illness – and there are significant health consequences. So, girls, it's in your interest to relax. Doctors' orders.

So, run a bath, put your feet up, read a book, get a massage. And if any of your family complain that you're on strike, hand them a take-away menu and the number of a cleaning service and just explain that it's cheaper than a nervous breakdown.

Oh and PS, psychologists also maintain that Scottish reeling releases more endorphins than sex. So having sex at a cèilidh should be your aim in life – a highland fling, literally. I'm just off now to buy a kilt.

This article appears in Sunday Life magazine within the Sun-Herald and the Sunday Age on sale November 18.