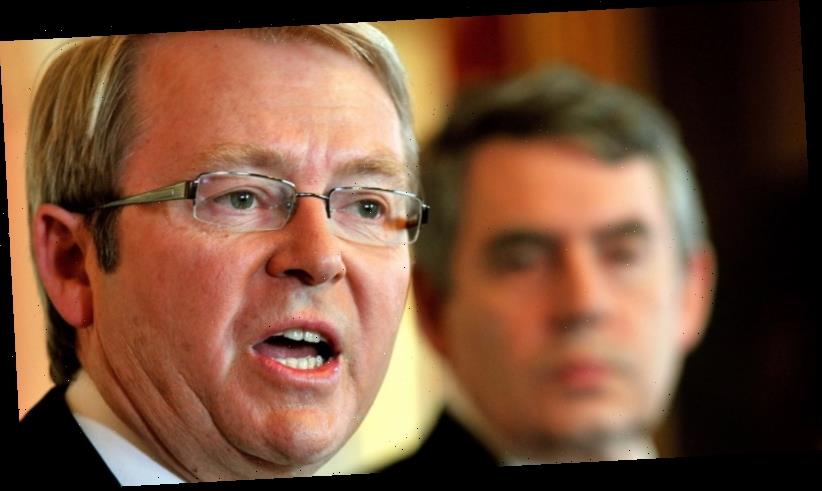 Facebook has banned the sharing or viewing of our news articles on its platform. For independent journalism straight from the source, download our app and sign up to our newsletters.

Former Australian prime minister Kevin Rudd has denied he was physically restrained from “punching the Chinese negotiator” during heated climate change talks in Copenhagen a decade ago.

His former British counterpart, Gordon Brown, who sat alongside Mr Rudd and other world leaders during the failed 2009 United Nations Climate Change Conference negotiations, made the allegation in left-wing British newspaper The Guardian. 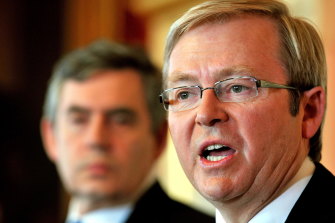 In a review of a new book, How To Avoid A Climate Disaster by software developer and philanthropist Bill Gates, Mr Brown said the talks ultimately failed because of both the reluctance of the United States to make legally binding commitments and a “deep suspicion” from China, India and other emerging economies of any obligations they believed might threaten their development.

“So determined were they to avoid binding commitments that they rejected Europe’s offer to unilaterally bind itself to a 50 per cent cut in its emissions,” Mr Brown wrote.

“So bitter were the divisions that the Australian prime minister Kevin Rudd, who bravely stood out for an ambitious deal, had to be physically restrained from punching the Chinese negotiator.”

Mr Rudd told this masthead on Monday that Mr Brown’s account of the climate talks was an “urban myth”.

“The bottom line is that I was vigorously prosecuting Australia’s climate interests at a time when China was aggressively resisting. I make no apologies for doing so.”

Mr Brown and Mr Rudd were two of the world’s most important political leaders during the global financial crisis and together helped establish the G20 Leaders’ Summit, which led the global recovery effort.

They have remained close since leaving politics, with Mr Brown hosting the British launch of Mr Rudd’s memoir, Not For The Fainthearted: A Personal Reflection on Life, Politics and Purpose at The Oxford Union in 2017.

Mr Rudd’s contribution to the Copenhagen summit has been well documented, including the allegation he said “those Chinese f—ers are trying to ratf–k us”, in a private briefing to journalists following a breakdown in the talks.

One report at the time revealed Mr Rudd was “annoyed enough to bang his microphone”.

In his autobiography, Kevin Rudd: The PM Years, the two-time PM said he had told an off-the-record briefing the Chinese had “ratf—ed” the negotiations.

“I admit this was a colourful phrase,” Mr Rudd wrote. “It reflected my own degree of personal frustration at what had just occurred.

Mr Brown wrote that the Paris accord of 2015 had helped reverse many of the setbacks of Copenhagen, and November’s Glasgow summit represented “the best opportunity in years to make progress”.

“It also comes at a time when the science is more definitive, the technology more cost-effective, and the price of inaction far clearer. What’s more, [US] President [Joe] Biden and his new climate envoy John Kerry are promising a renewal of American leadership, and corporations and cities are on board for change,” Mr Brown wrote.

“We should advance the cause of carbon pricing by agreements to eliminate fossil fuel subsidies and by taking up Biden’s plan for border adjustment mechanisms that, for the first time, tax carbon-intensive imports and exports.”

This masthead revealed earlier this month Australia plans resist efforts to encourage countries to adopt new taxes to capture imports from carbon-price-free jurisdictions such as Australia.

Our Morning Edition newsletter is a curated guide to the most important and interesting stories, analysis and insights. Sign up to The Sydney Morning Herald’s newsletter here, The Age’s here, Brisbane Times’ here, and WAtoday’s here.