How to have a healthy Halloween: Mummy bloggers swap traditional sugary treats for healthy snacks made from leftover pumpkins (so what did their children think?)

Halloween is almost upon us, signalling the annual haul of sugar-laden sweets, chocolate and toffee apples.

But if you’re worried about your children’s sugar intake, help is at hand as these health-conscious mums have whipped up some delicious seasonal snacks that are not only healthy – they’ll save you money, too.

Femail challenged three bloggers to road-test a range of alternative squash-based recipes using the leftovers from pumpkin carving, to see how they would go down with their children and trick-or-treaters.

Using ingredients and recipes from supermarket giant Aldi, they cooked up a batch of pumpkin soup, fries and spiced muffins to keep their hungry children happy.

Here, we see how our bloggers got on (and what their kids really thought of their new snacks)… 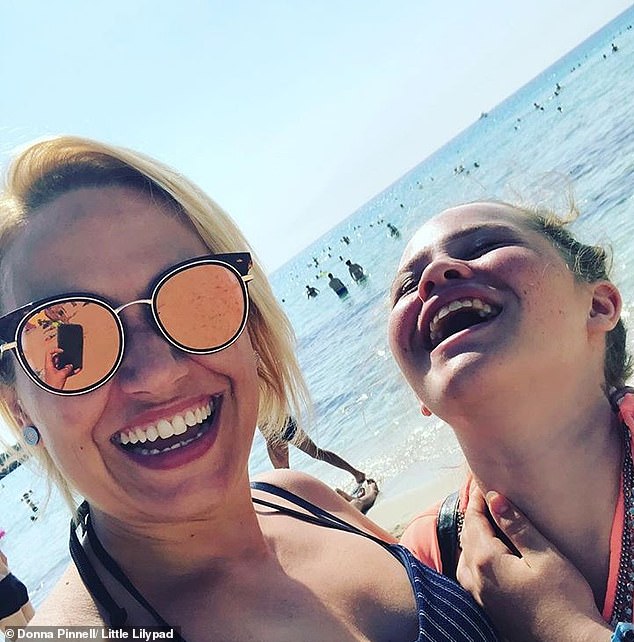 Donna Pinnell, pictured with her eldest daughter, made pumpkin fries, muffins and soup with her children in a bid to see if there really is such thing as a healthy Halloween treat 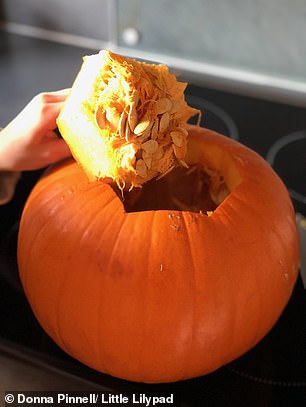 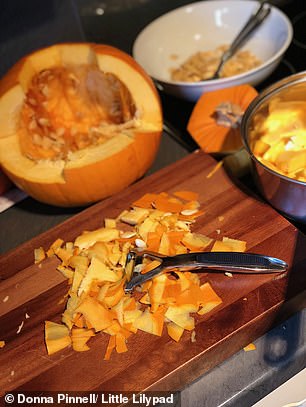 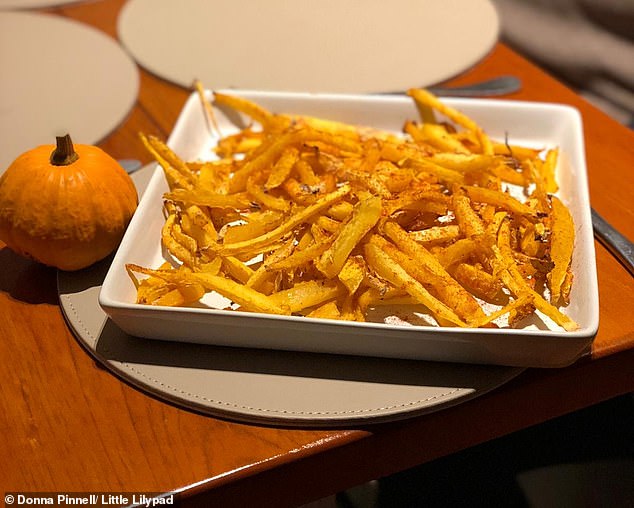 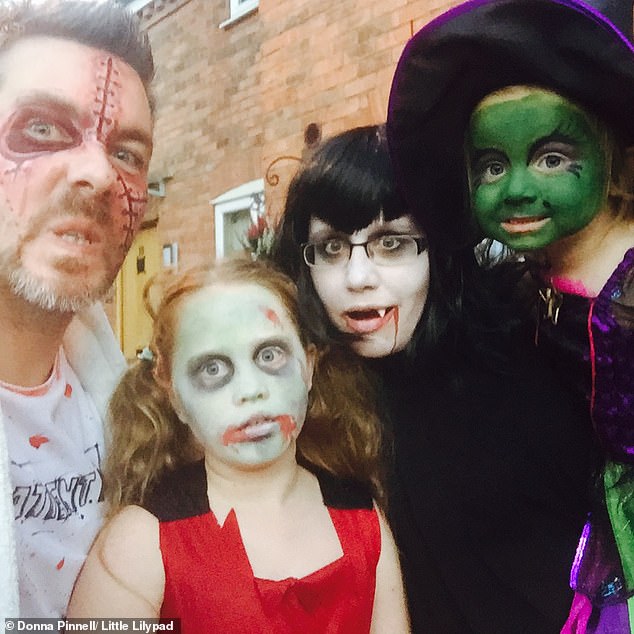 Donna Pinnell, a 40-year-old blogger who runs the Little Lilypad Co, pictured with her partner and two daughters who helped her peel the pumpkin and cook up some delicious fries

Donna Pinnell, who runs the Little Lilypad Co blog, made a batch of homemade pumpkin fries for our healthy Halloween snack challenge.

While Warwickshire-based Donna’s eldest daughter peeled the pumpkin, the youngest helped measure and stir the ingredients.

The fries went down a treat, as Donna explained: ‘They are both pretty good with vegetables but there was a certain reluctance to try pumpkin.

‘I think we have always just considered it a Halloween “prop” and never really viewed it as something to eat. Pumpkin fries are a delicious alternative to accompany your burgers.’

Giving her top tips for pumpkin picking, Donna added: ‘Pumpkins come in a whole host of shapes and sizes, and you can even get some stunning variations in colour and shade too.

‘Arrange a date when you can go out and hand select your pumpkins on a farm. Just as you would at Christmas time with various decorations, adorn your home with your selection to really create a homely ambience in your house.

‘Don’t forget to add a bunch of October flowers, too. Deep reds, browns and oranges will look divine.’ 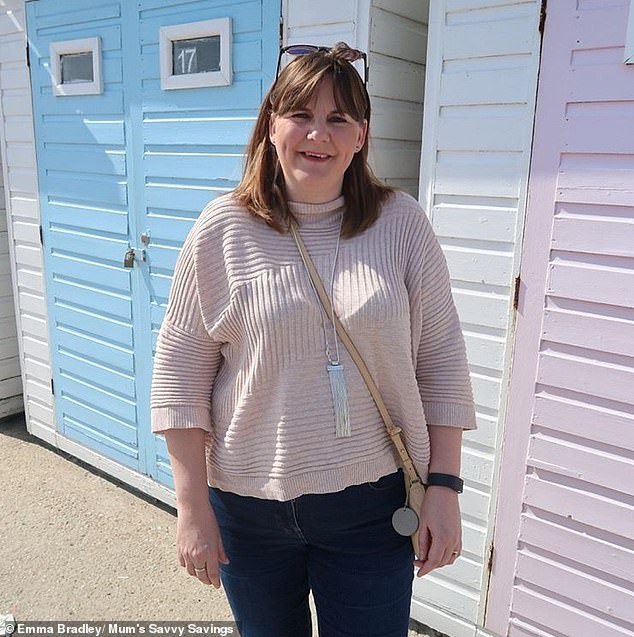 Gloucestershire blogger and mother of three Emma Bradley, pictured, made pumpkin spice muffins with her eight-year-old daughter Erin who had never tried the squash before 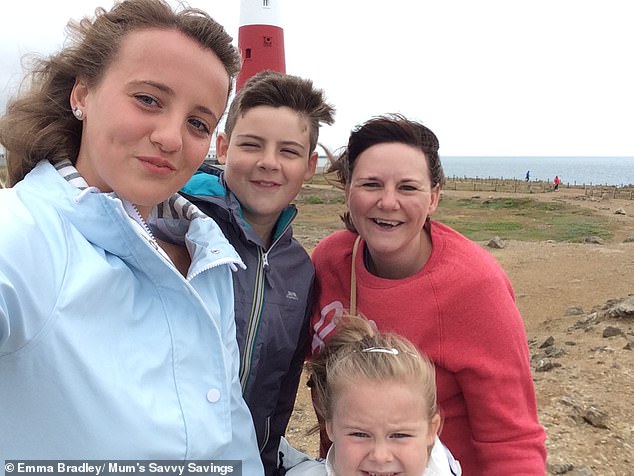 Emma Bradley pictured with eight-year-old daughter Erin, Chloe, 18 and Dylan, 14. The mother-of-three whipped up a batch of healthy pumpkin spiced muffins for Halloween this year 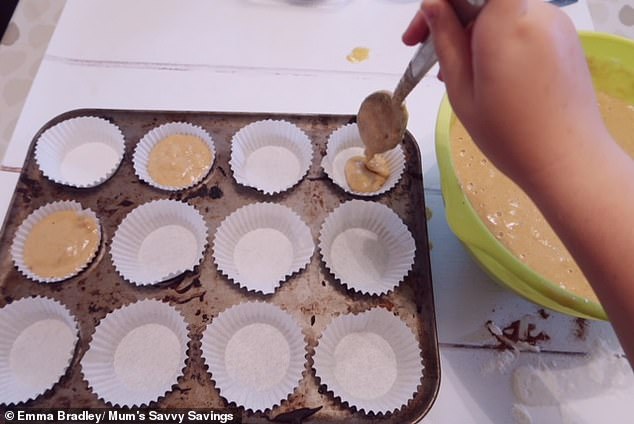 Eight-year-old Erin pictured helping with the baking. Proud mum Emma said: ‘Like most children, Erin loves helping me in the kitchen and I know that she will be more adventurous in what she eats if she has had a hand in either growing it or preparing it’ 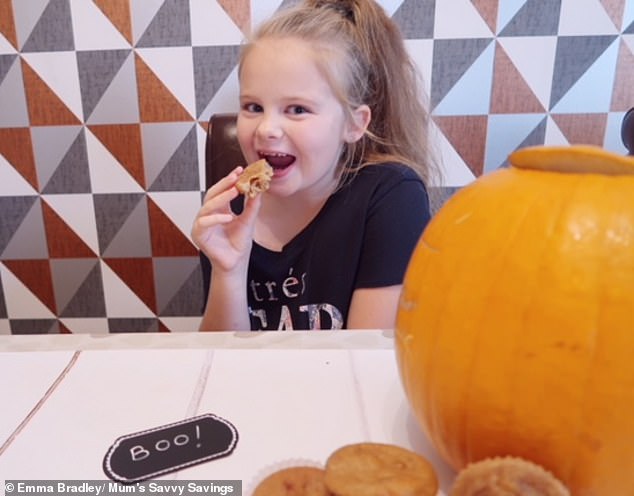 Eight-year-old Erin, pictured, eating the muffins. Mum Emma thinks the muffins are perfect for an after school snack or inside lunch boxes and a healthy alternative to sugary treats 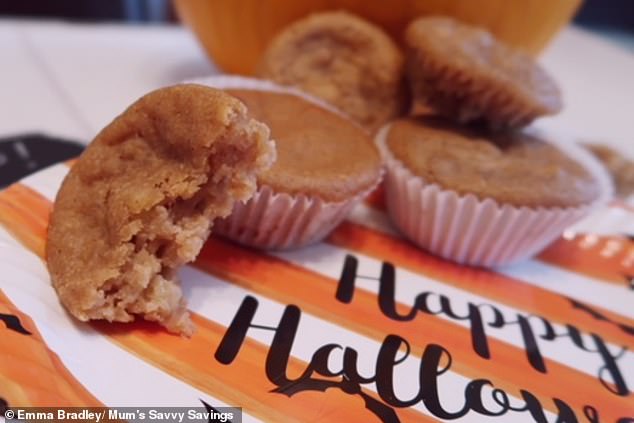 The finished batch of muffins made by Gloucestershire mother Emma. Even her teenage son, Dylan, liked the muffins – despite picking chocolate every time while out shopping

Emma Bradley, 42, from Gloucester, who runs the blog Mum’s Savvy Savings, made a batch of pumpkin spice muffins for her children to enjoy.

Her eight-year-old daughter Erin had never tried pumpkin before and probably wouldn’t have tried it if she hadn’t helped in the baking process.

Emma, who is also mother to Chloe, 18 and Dylan, 14, said: ‘The finished pumpkin spice muffin was really tasty and both Erin and teen enjoyed them.

‘[Dylan] was rather surprised as he would never pick up a pumpkin spice muffin if he saw it in a shop, it would be chocolate every time.

‘Yet these were full of flavour and tasted really good with the cinnamon and walnuts. It really is a great autumn twist on a muffin.’

She added that the snacks are perfect for after school or in a lunch box. 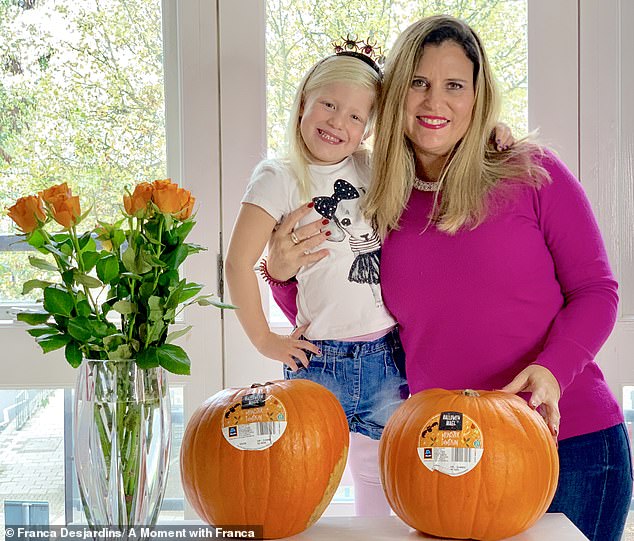 Franca Desjardins, 41, from London, pictured with four-year-old daughter Sienna. The busy mother-of-two decided to ditch sweets this year for a batch of pumpkin soup and her children were pleasantly surprised 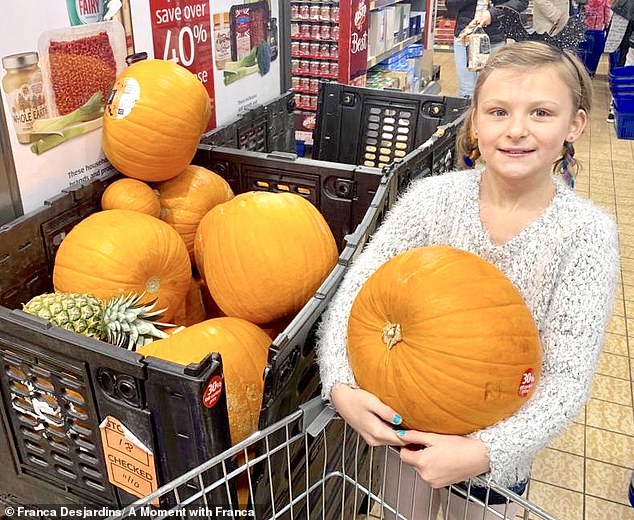 Franca’s eight-year-old daughter Ella picking out a pumpkin at the supermarket. Franca said she wanted to see ‘whether pumpkin carving with my girls would help them to be more open to the thought of eating pumpkin and squash’ 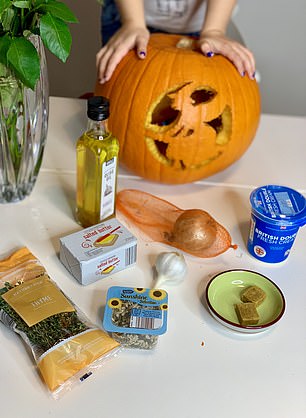 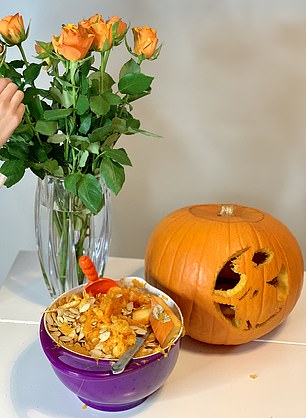 The ingredients for Franca’s pumpkin soup (left) the hollowed-out pumpkin (right). According to Franca, healthy eating ‘is always an issue because Halloween is generally associated with sweets and chocolates! It is inevitable’ 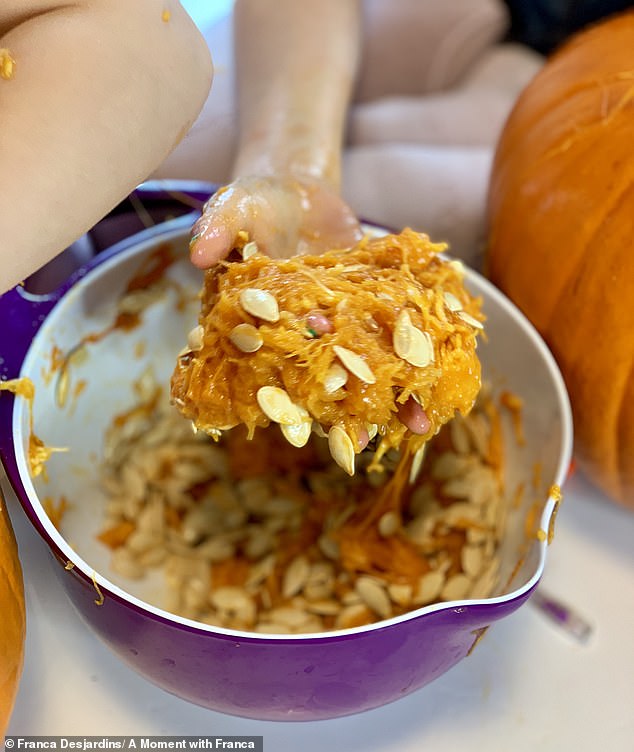 Franca’s daughters helping out with the pumpkin carving. The mother-of-two said: ‘We accepted the challenge because we thought it could be interesting to see if we can see any changes in [the girls’ behaviour]’

Franca Desjardins, 41, from London, is mum to Bella, eight, and four-year-old Sienna.

The mother-of-two, a lawyer who also runs A Moment with Franca, decided to try out Aldi’s pumpkin soup recipe to see how it would go down with her daughters.

Franca said she wanted to see ‘whether pumpkin carving with my girls would help them to be more open to the thought of eating pumpkin and squash’.

‘This is always an issue because Halloween is generally associated with sweets and chocolates,’ she said. ‘It is inevitable!

‘We accepted the challenge because we thought it could be interesting to see if we can see any changes in them.

‘Interesting research shows that letting your kids help in the kitchen and experience food with all senses can be a great way to create a positive atmosphere around healthy food. 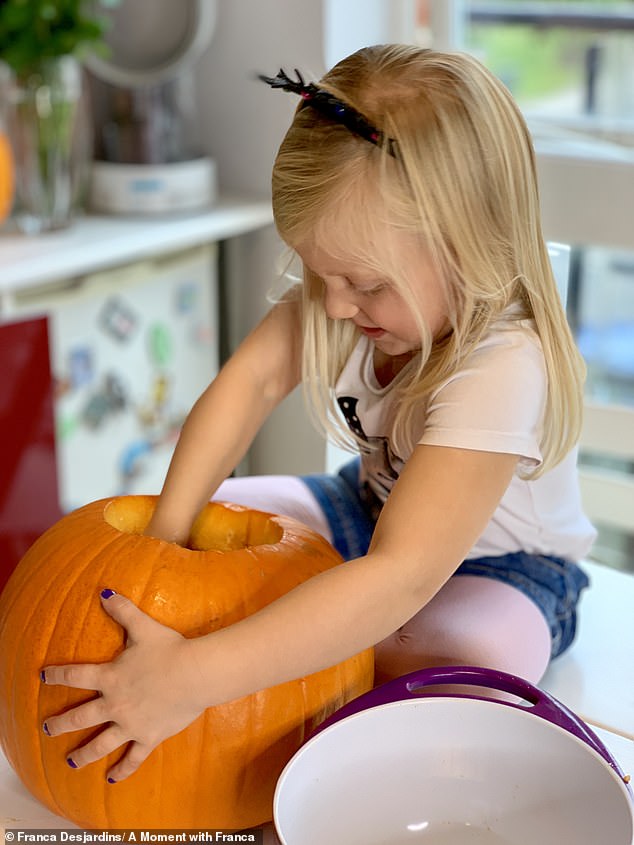 Four-year-old Sienna gets stuck into pumpkin carving. Mum Franca said: ‘Research shows that letting your kids help in the kitchen and experience food with all senses can be a great way to create a positive atmosphere around healthy food’ 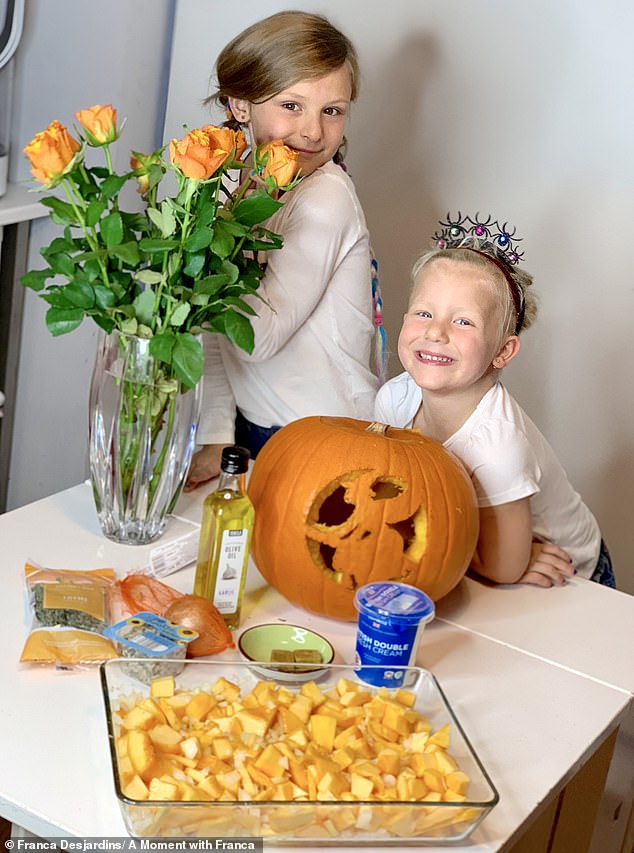 Bella, eight, and Sienna, four, helping their mother out with pumpkin carving, chopping, and cooking. Mum Franca concluded: ‘We all tried it and it was for me, the tastiest soup I have ever tried’ 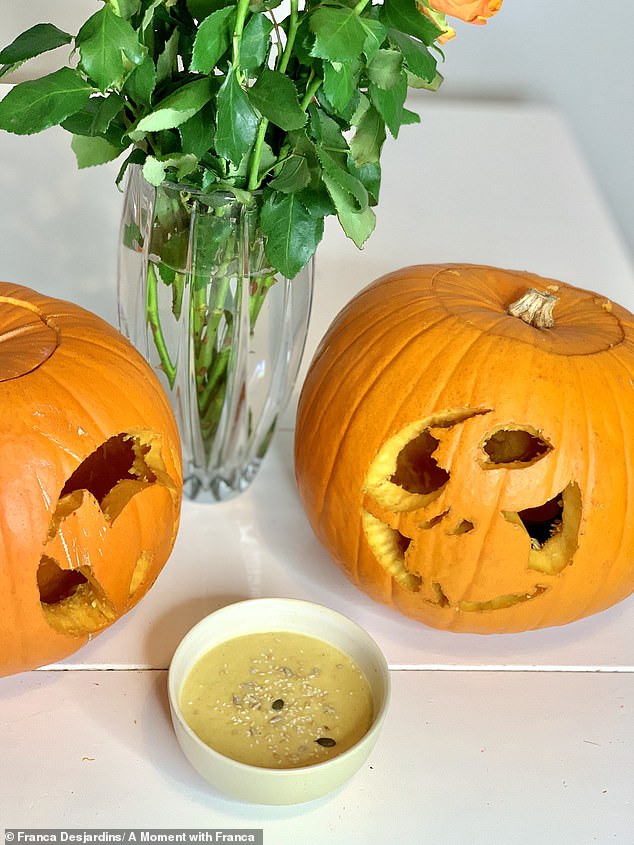 Franca’s finished pumpkin soup, with the squashes carved as a witch and a cat. The blogger said: ‘It really smelled amazing. You could smell the garlic around the house’

‘My husband always carves a couple of pumpkins every year and the girls love it but this year we actually wanted them to be properly involved in the process so we asked them to help.

‘My girls are aged eight and four years old so they are at the perfect ages to be super excited about this.

‘As we wanted to get them involved since the start we took them to Aldi to choose their pumpkins.

‘This was, of course, a fabulous idea because they were talking all the time about the pumpkins, the designs and what recipes they would be helping to prepare in the kitchen afterwards. I thought we were definitely starting this challenge on the right foot.’

The family got to work carving pumpkins, with Bella opting for a cat and Sienna making a witch, before making a start on the pumpkin soup.

‘My girls like soup in general but they haven’t tried pumpkin soup before,’ said Franca.

. A few sprigs of fresh thyme

. Peel the squash/pumpkin, half and remove the seeds

. Peel, half and chop the onions

. Put the onions and squash/ pumpkin into a large roasting dish

. Drizzle over the oil and season with some salt and pepper

. Meanwhile peel and mince the garlic in a saucepan; add the butter and melt

. Cook the garlic in the butter on a low light for a few mins

. Then add the roasted squash/ pumpkin and the onion

. Pour over the boiling water, add paprika and crumble over the stock cubes

. Bring to the boil and stir well

. Cook for 15 mins then liquidise

. Add the cream and heat through gently, check the seasoning, add more salt and pepper if needed

. Serve sprinkled with the seeds

‘It really smelled amazing. You could smell the garlic around the house. So we all tried it and it was for me, the tastiest soup I have ever tried. Wow, I was so impressed.

‘We liked it so much that we had a second bowl each! I was so happy to see my girls enjoying a meal that contained pumpkin.’

Reflecting on the pumpkin challenge, Franca said: ‘The girls were much more open to trying these pumpkin dishes compared to simply offering a new or different veggie, because they were involved in the whole process.

‘They both loved the soup and we will be preparing it again more often during the upcoming months. It’s perfect for the cold season.

‘Creating food from the leftovers of their carved pumpkins made the whole process of the girls trying these healthy meals much easier.’

10/30/2018 lifestyle Comments Off on Is there REALLY such thing as a healthy Halloween?
Recent Posts