Text messages at the most senior levels of the Andrews government’s COVID-19 response reveal that confusion and disorganisation over the use of defence force personnel in the ill-fated hotel quarantine program persisted until late June.

Evidence presented at the hotel quarantine inquiry on Monday also clearly demonstrates that, from the first day the program was set up on March 27, there was help available from the ADF for the quarantine effort despite Premier Daniel Andrews' statement to parliament that it was "fundamentally incorrect to assert that there was hundreds of ADF staff on offer". 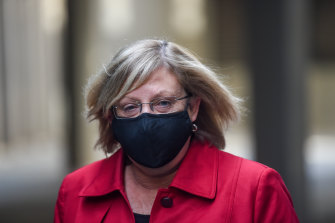 On June 24, Victoria asked the Commonwealth for 850 troops to replace private security guards at the hotels, but messages between Ms Neville and the state's Emergency Management Commissioner Andrew Crisp, tendered to the inquiry, show the minister had no knowledge that the request had been made.

"The use of army in hotels? That was not agreed at CCc [Crisis Committee of Cabinet] yesterday but is that what we [sic] doing? And what will they be doing?" Ms Neville texted.

Mr Crisp replied, "Yes I was advised that is what's happening" and troops would be "monitoring compliance requirements". The ADF presence was "very much as an interim option while other options including police/PSOs is explored", Mr Crisp said.

Ms Neville wrote back: “Not sure what they do at hotels given no one leaves!! And they have no powers”. She then suggested Mr Crisp should brief Chief Commissioner Graham Ashton before he appeared on radio that morning.

Mr Crisp rescinded the request to the Commonwealth on June 25, the same day he spoke to Ms Neville. The Justice Department, which had taken over the failed program, deployed Corrections Victoria officers to hotels instead.

The evidence also shows that Ms Neville was in the room with Mr Crisp on March 27, when the key decisions were made to establish hotel quarantine. On that day, Mr Eccles’ deputy Kate Houghton texted Mr Crisp at about 2pm saying, "Just wanted to update post-national cabinet on use of ADF."

Mr Crisp texted back: "Thanks – I think my minister has some idea of ADF and that's what we're discussing with Graham Ashton [the then-chief commissioner of Victoria Police] at the moment. Will call." Mr Crisp was in a meeting at the time with Mr Ashton and Ms Neville, in which he made two notes at the time: “ADF” and “private security”.

Mr Crisp told the inquiry last week he saw no need for ADF boots on the ground at the end of March because Victoria had sufficient resources, and, like the guards, defence troops carried few legal powers, including the inability to physically restrain people who might try to flee quarantine.

The evidence presented to the hotel inquiry comes as normally secret internal government documents revealed that, as Victoria’s devastating second wave took hold, the government's Crisis Council of Cabinet was being told the scheme had been a success.

A submission to the Cabinet meeting on June 27 said hotel quarantine “demonstrated to be an effective mechanism for preventing and managing COVID-19 in Victoria”. By then it was known that outbreaks had occurred which were later revealed to have caused 99 per cent of the state’s deadly second wave of infections.

“Incidents of non-compliance with infection prevention and control and physical distancing requirements, particularly from security contractors, have resulted in outbreaks in hotel quarantine,” the Cabinet submission also read.

Evidence before the inquiry shows the request for 850 troops was one of a series of requests from Victorian government agencies in late June to try to bolster the failing hotel quarantine system. The evidence also shows confusion about what had been requested and by whom.

The decision to use security guards over the ADF or police when the hotel quarantine program began on March 29 remains a critical issue to the inquiry and on Monday, the state’s top public servant was still unable to answer key questions about who made the decision.

Department of Premier and Cabinet secretary Chris Eccles said he was “unaware” of how the decision to hire guards was made. None of Victoria’s top decision-makers, including the department heads who ran hotel quarantine, the current and former police chief commissioners and the Emergency Management Victoria boss have been able to answer that question.

“The decision to engage private security ended up employing thousands of people and costing tens of millions of dollars. Should we be able to say who made it, as a matter of proper governance?” Counsel assisting the inquiry, Rachel Ellyard, said.

Mr Eccles replied that multiple agencies were involved and “no one of them is the repository of all information that goes to bear to the question”.

More than 30 security guards ended up catching coronavirus from quarantined returned travellers while working in the hotels at the end of May and mid-June, and the virus spread into the community and sparked Victoria's deadly second wave.

An offer of Defence assistance was made over email to Mr Eccles on April 8 from his Commonwealth counterpart, but Mr Eccles told the inquiry on Monday he could not remember if he passed the request on.

Premier Andrews told Parliament's public accounts and estimates committee on August 11: "It is fundamentally incorrect to assert that there was hundreds of ADF staff on offer and somehow someone said no."

09/21/2020 lifestyle Comments Off on ‘Is that what we doing?’: Confusion over ADF at top level of Andrews government
Recent Posts
We and our partners use cookies on this site to improve our service, perform analytics, personalize advertising, measure advertising performance, and remember website preferences.Ok