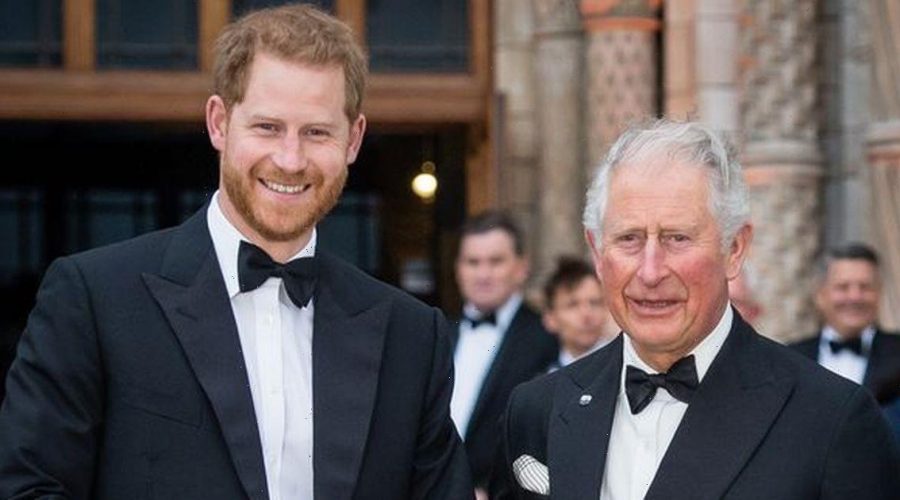 Rumours of a rift between Prince Harry and Prince Charles have been rife over recent months, and new claims allege the pair's relationship is now "at an all-time low".

Harry, 37, and Charles, 73, are said to have "barely spoken" since Harry moved to the US with his wife Meghan last year after quitting royal duties altogether.

Harry has been vocal about the royal family since stepping down, taking part in interviews where he's lifted the lid on his experiences as a royal.

It's believed he and Charles last saw each other at Prince Philip's funeral earlier this year, with just a select few "fraught" phone calls taking place in the months that followed.

As Harry's latest statement looks to provoke further drama, we take a look through the highs and lows of Harry and Charles' relationship over the years…

Get exclusive celebrity stories and fabulous photoshoots straight to your inbox with OK!'s daily newsletter . You can sign up at the top of the page.

Prince Charles has previously told how he tried to spend as much time as possible with his two sons, Harry and William, during their childhoods.

In 1994, Charles told a documentary that he aimed to dedicate his free time to his two children.

Nevertheless, a royal biographer has previously claimed that Charles had been a "remote figure" during Harry and William's childhoods.

Speaking to the Daily Beast, Penny Junor said: "It is a slightly tricky relationship because Charles has always been quite a remote figure, he has always been consumed by work.

Prince Harry has also hinted at trouble during his childhood, having told a podcast that he moved to the US to "break the cycle" of "pain" he suffered when he was growing up.

In regard to his father Charles, Harry claimed: "He treated me the way he was treated."

However, the pair were once understood to be extremely close, with Harry previously affectionately calling his father "Pa" when he guest-edited The Today programme for BBC Radio 4 in 2017.

Earlier this year, royal expert Robert Jobson also claimed that Harry and Charles always had a much closer relationship in contrast to Charles and William.

During their childhood, Harry and William watched their parents go through a very public divorce which became the focus of the media.

When the accident happened, Harry and William were staying at Balmoral with their father, which meant it was Charles' responsibility to tell them the heart-breaking news.

Back in 2017, Harry praised his father's parenting following his mother's death, telling how Charles looked after both him and his older brother well during the difficult time.

Speaking in a BBC documentary, Harry said: "One of the hardest things for a parent to have to do is to tell your children that your other parent has died. How you deal with that, I don't know. But, you know, he was there for us.

"He was the one out of two left and he tried to do his best to make sure that we were protected and looked after. But you know, he was going through the same grieving process as well."

Prince Harry and Meghan Markle tied the knot at St George's Chapel back in 2018, and have since welcomed two children together, Archie and Lilibet.

As the pair's wedding date loomed closer, it was revealed that Meghan's father Thomas Markle would not be attending his daughter's royal nuptials.

Prince Charles happily stepped in to walk his daughter-in-law down the aisle, a gesture that Prince Harry was extremely grateful for.

In 2018, Harry told a BBC documentary: "I asked him to and I think he knew it was coming, and he immediately said 'yes, of course, I'll do whatever Meghan needs and I'm here to support you.'

"For him, that's a fantastic opportunity to step up and be that support, and you know he's our father so of course he's going to be there for us."

Charles' 70th birthday came just weeks after the couple tied the knot, and Harry was still filled with praise for his father.

At a birthday party held for his father at Buckingham Palace, Harry made a heartfelt speech, where we declared: "His enthusiasm and energy are truly infectious; it has certainly inspired William and I to get involved in issues we care passionately about and to do whatever we can to make a difference.

"In fact, many of the issues William and I now work on are subjects we were introduced to by our father growing up."

After moved to the US and stepped down from royal duties, Harry and Meghan sat down with Oprah Winfrey for a tell-all interview in March 2021.

The explosive interview saw the couple lift the lid on the royal family, and Harry didn't hold back when it came to his father.

He revealed he felt "let down" by Charles, and claimed: "He knows what pain feels like. Of course I will always love him but there's a lot of hurt that's happened and I will continue to make it one of my priorities to try and heal that."

Harry also told how his family had cut him off financially, explaining: "My family literally cut me off financially. I've got what my mum left me, and without that, we would not have been able to do this. I think she saw it coming."

The dad of two opened up again recently when he appeared on the Armchair Expert podcast, where he was heavily critical of his father's parenting during his younger years.

He told the podcast: "When it comes to parenting, if I've experienced some form of pain or suffering because of the pain or suffering that perhaps my father or my parents had suffered, I'm going to make sure I break that cycle so that I don't pass it on.

"It's a lot of genetic pain and suffering that gets passed on anyway, so we as parents should be doing the most we can to try and say 'you know what, that happened to me, I'm going to make sure that doesn't happen to you'."

Not long after the bombshell Oprah interview aired, Prince Philip passed away and the royals went into mourning.

Prince Philip's funeral marked the first time Harry had returned to the UK since his move to the US, and many hoped it would prompt him to clear the air with his father Charles.

However, Harry attended the service and quickly flew back to the US where Meghan, who was heavily pregnant with the couple's second child at the time, was with their son Archie.

At the time, a source told The Mirror: "Harry didn’t expect everything to be completely back to normal but his feeling after seeing his family was there is a lot of ground to make up.

"Whether that is harder or easier to do on the other side of the world remains to be seen. There is a lot of distrust in the camp and everything is still very, very raw."

Harry then returned to the UK again in July to unveil a statues of his mother Diana, but during his short stay he didn't see his father.

More recently, it has been reported that Prince Harry had "severed ties" with Mahfouz Marei Mubarak bin Mahfouz, the Saudi tycoon who controversially received a CBE from Prince Charles in 2016 after donating millions to royal charities.

Mahfouz has previously denied any wrongdoing, and Clarence House had claimed that Prince Charles had "no knowledge" of the scandal.

In Harry's recent statement where he explained he had cut ties with the businessman, he claimed he had "concerns" over Mahfouz's "motives". While he doesn't mention Charles directly in the statement, it is believed he is indirectly criticising his father.

Angela Levin, Harry’s biographer, said: "He doesn’t mention Charles by name in his statement but it’s a clear case of one-upmanship.

"Harry looks for any occasion to whack his father and criticise him. It’s sad."

Prince Harry is set to release a tell-all memoir in 2022, which he claims will be a completely honest and accurate account of his entire life up until now.

As he prepares to lift the lid on life as a member of the royal family, it looks like his father could be the one directly in the firing line.

Author Andrew Morton told the Royally Us podcast: "If I was Prince Charles, I’d be looking for a pile of coats to hide under.

"Because I think that the book that’s going to come out next year is written by someone who spends a lot of time investigating father-son relationships because he ghost-wrote a book on Andre Agassi, who had a difficult relationship with his father.

"So I think we’re going to see Charles once more in the firing line. So if I was Prince Charles, I’d be looking for a hard hat and a flak jacket."

For all the latest Royal Family news and gossip, sign up to our daily newsletter here .