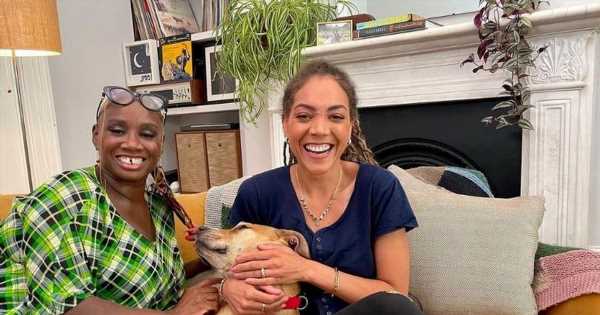 Miquita Oliverbecame a hit when she appeared on TVs at the age of 16.

The presenter, 38, and her co-host Simon Amstell shot to fame on Channel 4’s Popworld.

She resides now in a flat in Clapton, east London and often takes to social media to share peeks into her home.

Dressed in a white minidress before going for lunch with Mulberry, Miquita posed for a mirror selfie in her bedroom.

The room featured cream carpets, a white set of drawers and a splash of colour with a purple duvet.

Her closet often appears on her grid and is all that would be expected from a fashionista such as Miquita.

Featuring rows of hangers and bright clothes, she stacks her bags on her door handle and ensures that the dressing room is always well stocked with flowers.

She appeared in Gogglebox with her mum in 2021 and showed off her home then.

The living room is home to a fireplace, bookshelves and complete with a yellow sofa.

Miquita has just turned 38, and told OK! her thirties have been a far more settled time . Her pace of life has slowed and she has relocated to Clapton, where she says she enjoys the calming influence of nature.

Her parents live around the corner, too, and she has a particularly close relationship with her mum, The Great British Menu star Andi Oliver. However, she does admit that getting older is something that worries her.

“Turning 38 was a shocker!” she laughs. “Coming to terms with being a woman who is ageing, especially a woman who has been known since she was 16, is hard.

“People expect you to still look 16. So that’s always been quite a lot of pressure for me, and I’ve always felt like I was letting people down by ageing. But I’m trying to embrace getting a bit older, to acknowledge the privilege of it.”

It’s something that she has particularly appreciated since nearly losing her life in the Boxing Day tsunami in Thailand in 2004.

She was on holiday with Simon and as they ran to safety, they got separated and believed each other to be dead. They were eventually reunited and spent the day sitting on a hill, in case there was a second tsunami. She says it was the worst experience of her life.

Miquita opened up to OK! about the experience. She said: “It was horrendous, a really earth shattering, terrifying thing.”

"It was kind of a blessing to be with Simon but also not, because he definitely wanted to make jokes far too early afterwards," she adds.

Miquita says she told Simon: "Dude, we just got out of a natural disaster."

Miquita, who now practices Buddhism and describes herself as "a bit of a hippy" says that the experience gave her a new perspective. "It was a surreal experience I’ll always remember and feel very grateful I survived," she says.

For more showbiz updates,sign up to our daily OK! newsletter.