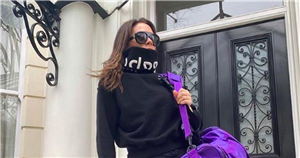 It’s believed that Victoria and David Beckham's home was burgled by a masked robber while members of the family were in.

Reportedly the celebrity couple were at their West London home with their ten year old daughter Harper when the incident occurred, and the damage wasn’t discovered until their son Cruz, 17, came in from an evening out with friends.

The couple spent millions renovating their £33 million house in 2016, expanding their west London mansion to add more bathrooms, a beauty room for the fashion entrepreneur, a dressing room and a lads’ area for David and his sons, Brooklyn, Romeo and Cruz.

Their home is across four floors and also includes three guest bedrooms. Get exclusive celebrity stories and fabulous photoshoots straight to your inbox with OK!'s daily newsletter.

The couple also have a second home in the Cotswolds, where they spent lockdown and often enjoy holidays as family, but they also have the impressive city property, which at £31m is nearly three times as much as David's pal Prince Harry and Meghan Markle's LA property which is worth £11.2m.

Sticking to the town house theme, Victoria and David have black, white and neutral colours throughout.

The mum of four often shares photos posing in their hallway, revealing a large, black and white tiled entrance area, a floor-to-ceiling window to let natural light into the hall, and a marble staircase.

Harper also joined her mum when it came to posing for World Book Day wearing a Harry Potter costume.

Despite kitting out their home with expensive details, the celebrity couple have managed to stick to a homely feel, especially with a log fire place in their living room. Victoria sometimes shares snaps in their dining room, revealing they have a huge oak table in front of a gorgeous bay window adorned with draped curtains.

They have oak flooring throughout their home, and a small balcony at the back of their house.

The family also spend a lot of time in the kitchen, which appears to be the hub of the home. It features dark green cabinets and mottled grey countertops as well as a wooden centre island and matching stools.

In 2016, MailOnline shared a floor plan of Posh and Becks’ home as the construction work came to an end.

The couple seemingly like to keep their business arrangements within reach, as Victoria has a large office of her own where she can run her fashion empire.

In the basement, the family have a luxury spa and gym, as well as a playroom, powder room and a room entirely for deliveries. The ground floor consists of a kitchen which is made to restaurant standard, the family living room, dining room and Victoria’s office.

The bedrooms and main bathroom take up the first level, with a manicure, hairdressing and make-up room at the back of the house, as well as a plush terrace overlooking their posh West London street.

Brooklyn, Romeo, Cruz and Harper have their bedrooms on the second floor, while the third floor holds David’s man cave and three guest bedrooms.

For all the latest celebrity news, sign up to our daily newsletter here.