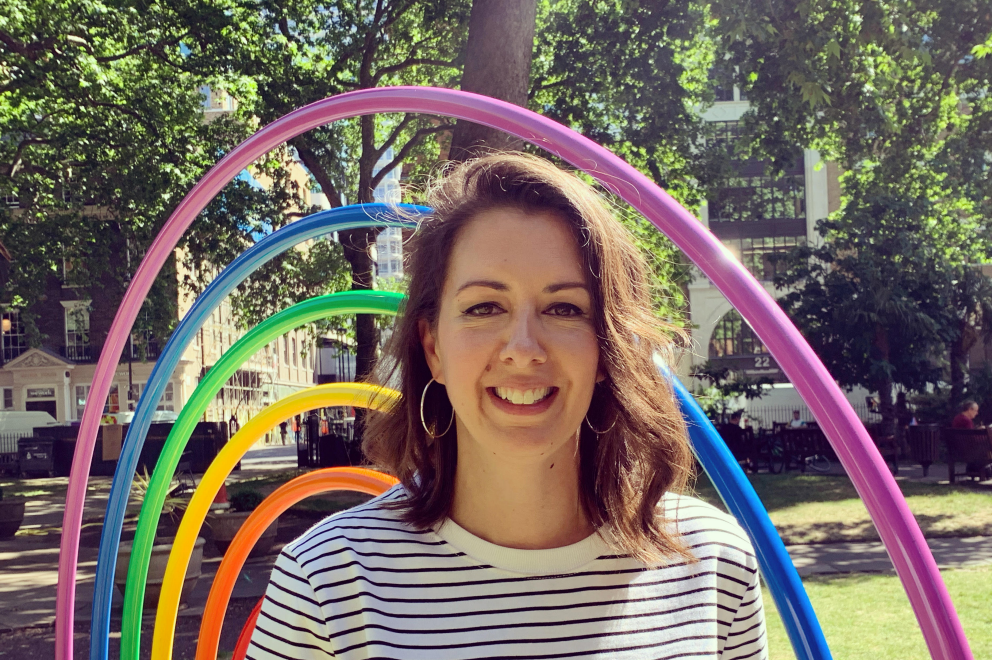 But I didn’t always feel quite so confident doing so. And I am not alone in this – many of my sapphic sisters struggle with the word.

My wife and I have been together for many years. I am the out-and-proud Head of Diversity, Equity and Inclusion at a global creative agency, and I volunteer at a charity (Diversity Role Models) where I talk to students and staff to help schools become more LGBTQ+ inclusive.

Despite all of this I think, like most gay people, I’ve been on a journey of self acceptance that comes with being ‘other’ in a society with inflexible expectations on most of us. Language, and therefore labels, are critical to how we feel about ourselves, and how we want others to perceive us.

As a young person I defaulted to the word ‘gay’. I think it felt a little more common in society and in the general media. Perhaps therefore it was just a bit more acceptable – a little less prickly on the ear than ‘lesbian’.

There is a beautiful movement happening with Generation Z.

Many of them proudly share their pronouns and shun the rigidity of labels. Increasing numbers are mostly likely to be gender fluid and sexually liberal.

They have also been instrumental in reclaiming the previously hate-filled term ‘queer’, using it instead to celebrate both a wonderful community, and to recognise that people can have ever-changing preferences, rather than one fixed identity.

However, for every positive we can take from the lack of a need for labels, I also hope we won’t lose the joy and pride you can take from one.

Why aren’t more women who love women saying the word lesbian out loud? It’s a question I’ve been asking myself since Lesbian Visibility Week earlier this year.

I could joke it’s because us lesbians only get seen for one week a year, but I’m also genuinely wondering: is the word ‘lesbian’ in danger of becoming invisible?

It’s an issue that’s close to home for me, because I want my young kids to hear the word first in a positive context but, to many, it is a contentious word due to its toxic connotations through misuse as a pejorative slur.

My wife and I are of the same generation and had pretty similar upbringings culturally, but she has little love for the word. Growing up it was carelessly used by some of her peers as an insult, something associated with freakiness, ugliness, total social shame.

And she isn’t the only one who is hesitant. New research has shown British lesbians are delaying coming out because of harmful stereotypes connected to it.

Last month, LGBT+ charity Just Like Us found 68% of those surveyed feared they would be perceived as ‘man-hating’, ‘over-sexualised’ or ‘anti-trans’. Others worried they’d be seen as ‘taboo’ or ‘unattractive’, with many stating the word lesbian had been used towards them as an insult.

I find this absolutely tragic when most people are probably under the assumption that society is generally moving towards greater inclusion and belonging.

In wider society, if someone references ‘the L word’, they’re probably using a cute acronym for the word ‘love’. But when queer women hear the same phrase, they are almost certainly referencing the biggest TV series that’s ever represented lesbians on screen.

And yet, in that chosen title, there is an implication of not quiiiite being able to say the word lesbian out loud even to this very audience. Should we silently mouth the word behind a shielding hand to avoid it hitting the general public’s ears?!

Even on TikTok right now, there’s a humorous, but enlightening trend for lesbian couples to share their own codewords for other lesbians if they spot one in the street. My wife and I do this too. (Our word for this is ‘seagulls’ – don’t ask.)

When I was growing up, the word ‘queer’ was a painfully ugly insult. But ‘queer’ has been so positively and proactively reclaimed that I happily use the word now. It took me a while.

Now, I celebrate the word ‘queer’ – and I wish more people would do the same with the word lesbian.

There are valid reasons for people feeling negative about labels in general, as they feel rigid, inflexible and unnecessary to some. But I’d argue in favour of them in many ways, too.

To celebrate 50 years of Pride, Metro.co.uk has teamed up with Kyiv Pride to raise money for their important work in Ukraine.

Despite war raging around them, Kyiv Pride continue to help LGBTQ+ people, offering those in need shelter, food and psychological support.

We will be splitting the funds with akt, a charity dedicated to supporting young homeless LGBTQ+ people.

You can donate here

Labels can give a satisfying sense of identity. They can be a positive affirmation of someone’s sense of self and be a shortcut to finding a community. For me, homogenising the queer community as singular is not necessarily a positive thing.

I feel really good about saying I am a lesbian – I am proud of who I am, and I recognise that navigating life with a perspective of ‘otherness’ is in fact a superpower that is precious and valuable to me.

I want to positively reclaim the word lesbian and I think more people should too, if nothing else, to counteract the toxic voices of TERFs – some of whom are murkily aligning transphobia with lesbianism.

I worry if certain campaigning groups can remove the letter ‘T’ from ‘LGBT’, it won’t be long until some come for the ‘L’ too and erase it. The L and T have long belonged together – we’ve been allies for decades, after all.

And while there might be a dichotomy between my wife and I when it comes to describing our sexualities out loud, we do agree that the word holds power and we’re hopeful that it lands positively on our kids’ young ears.

Lisa Luxx wrote a powerful poem simply entitled Lesbian. She includes a line, which really stuck with me: ‘Lesbian is a word that is stuck in your throat.’

Only by raising our voices do we drown out the sound of hate – and make the word ‘lesbian’ one to be celebrated for more than one week a year.